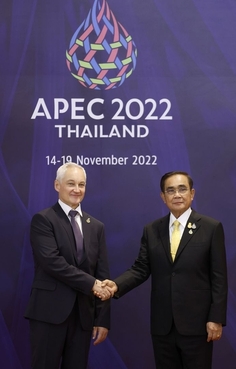 Andrei Belousov took part in the first plenary session, the main theme of which was “Balanced, Inclusive and Sustainable Growth.” Then the summit participants continued an informal dialogue with the guests of the host country.

The summit programme also includes a meeting of the delegation heads with the APEC Business Advisory Council.

On 19 November, the second plenary session will be held, which will be dedicated to the development of trade and investment.

The main theme of Thailand’s presidency in APEC in 2022 is “Open. Connect. Balance.” The parties plan to develop joint solutions to increase the stability and reliability of supply chains, determine future steps for the development of the digital economy in the region and its role in supporting SMEs. Special focus will be placed on the development of cooperation on the climate agenda. The leaders of the APEC economies plan to adopt a separate statement on the biocircular and green economy.

An APEC ministerial meeting took place ahead of the Bangkok summit, where Russia was represented by Deputy Foreign Minister Alexander Pankin and Deputy Minister of Economic Development Vladimir Ilyichev.

Agenda: Expanding the list of therapeutic food for children with disabilities, purchasing Oncaspar, extending the Far Eastern Mortgage programme, implementing a programme for building a network of world-class university campuses, ratifying the treaty with Belarus required for the introduction of an integrated system for administering indirect taxes, and automatically informing citizens about pension accounts in non-government funds.
6 December 2022 Meeting of the Trilateral Working Group co-chaired by the deputy prime ministers of Azerbaijan, Armenia and Russia
6 December 2022 Alexander Novak holds 19th meeting of the Intergovernmental Commission on Socio-Economic Cooperation between Russia and Abkhazia
6 December 2022 Meeting of the Coordination Council for Material Support of the Russian Armed Forces, Other Troops, Military Units and Agencies

The Deputy Prime Minister spoke at a plenary session of the 18th Russia-Kazakhstan Interregional Cooperation Forum in Orenburg.
1
Show More