Dmitry Medvedev: “In 2017, trade between our countries increased by almost 27 percent. In Russia and the union in general, non-commodity exports grew at a faster pace. For the first time since the establishment of the union, the inflation rate in all five member states does not exceed 7.5 percent, the limit set by the Eurasian Economic Union Treaty.”

Delegation heads taking part in the meeting of the Eurasian Intergovernmental Council: 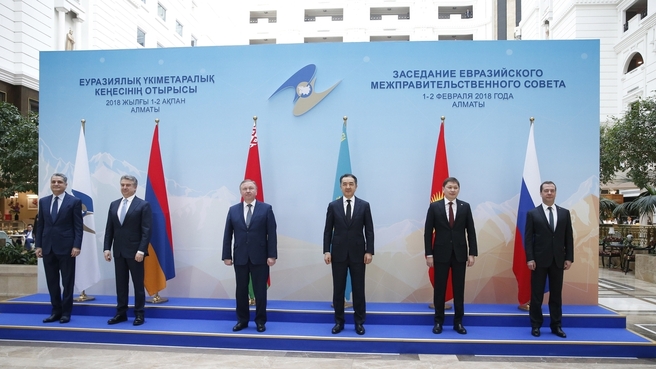 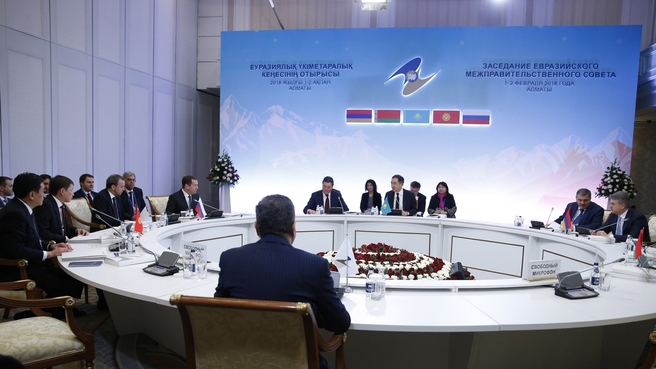 A restricted attendance meeting of the Eurasian Intergovernmental Council 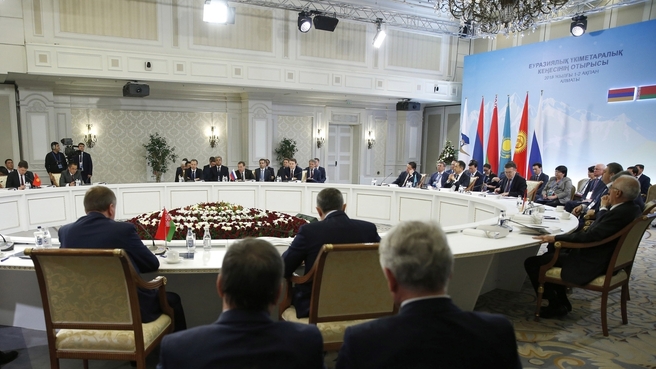 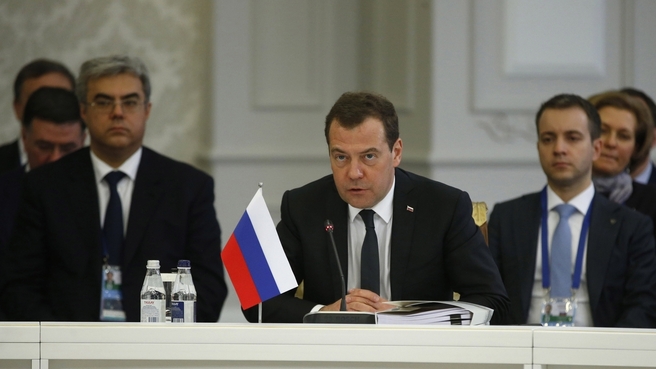 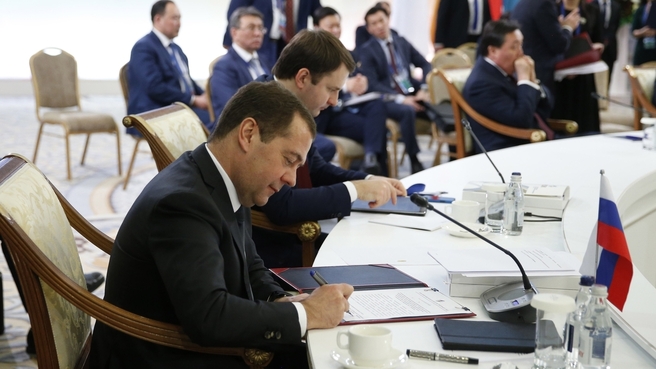 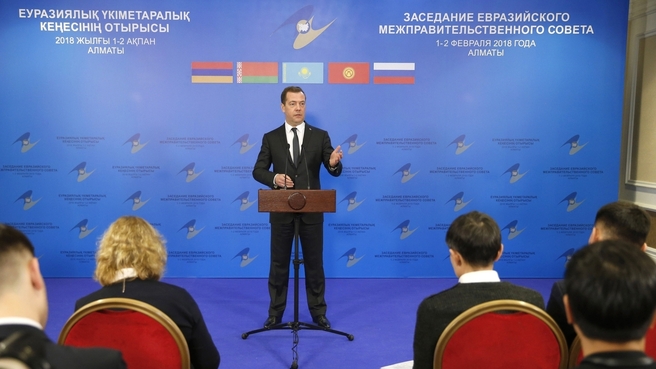 Chairman of the Eurasian Economic Commission Board Tigran Sargsyan

Dmitry Medvedev’s remarks at the meeting:

Colleagues, members of delegations, I would like to start by thanking Kazakhstan for organising this meeting and creating a very hospitable environment. It is always a great pleasure for us to visit Kazakhstan and the welcoming city of Almaty. I would like to wish a happy new year to all of you. As usual, we start every year by summing up the results of the previous one and setting out new goals. We have already started this discussion in a narrow format by agreeing on some matters and we will continue working on others. Overall, the discussion was quite effective, so that now we can continue working on all these matters at the expanded meeting.

Let me say a few words about the results of 2017. We take a positive view of last year both in terms of the economy as well as the development of the union’s institutions. The macroeconomic indicators within the Eurasian Economic Union were quite good.

Let me remind you that trade between our countries has grown almost 27 percent, as expected. GDP is also growing, and so are industrial production and agriculture. The import growth is noted almost in all goods. Both Russia and the EAEU in general outperform in the exports of non-resource goods. These are the positive results we see right now.

For the first time since the EAEU was established, the inflation level in all five countries does not exceed the cap set by the Eurasian Economic Union Agreement, or 7.5 percent. Moreover, in most countries the inflation is significantly lower, which results in – and this is important both for citizens and businesses – slower price growth. The decisions we made with you, dear colleagues, at the integration track have also played an important role in these changes.

First of all, it is important to work on strategic matters the Union faces. In order to do this, we have to eliminate barriers as well as limits on our market. We have discussed it productively and in detail at a restricted attendance meeting. We must progressively develop the interior integration contour, establish united goods and services markets, pursue coordinated policies in industry and agriculture and build our policy in import substitution to finally find mutually beneficial projects and start the creation of high-tech products.

Last year, we managed to eliminate 10 barriers, but the number of current inquiries from business is significantly higher. Technical and customs regulations and transport services are the most problematic areas. We will have to eliminate these legislative defects in all national economies. This is why the expert group on barrier elimination must work as actively as possible.

Secondly, aligning the supranational regulation is still a priority. Let me remind you that as of the start of this year a key document of the EAEU, new Customs Code, has come into force. We must not, and we are urging the commission, lower the speed of decision-making to develop the code; we also call on all countries not to delay the implementation of the code to the national legislation. This concerns all countries. This will directly concern the business climate and trade conditions. By the way, today we will sign an agreement on the marking of goods, which aims at better controlling trade within the EAEU. The monitoring will help improve the work of the unified market (as we have already seen in some items of goods) and the fiscal performance as well as bring entire sectors of retail trade out of a grey area. It is important to introduce the marking to new groups of goods stage by stage until all commodity flows are included, just as we agreed.

Thirdly, we need to supplement our work with new initiatives. We came here for a digital conference as well. In our speeches at the forum, my colleagues and I determined the priorities towards which we will move. We need to create a flexible regulation regime, which would be attractive to market participants. We need our own digital platforms as well as our own infrastructure, but at the same time we must act together, using common standards. We can apply this in different ways. I am talking about traceability, the development of e-commerce, the transition to common standards, the introduction of IT-technology in transport, industry and customs. We need to consolidate our national initiatives and start this work.

Obviously, there is a need to go deeper into other matters, including, in particular, nuclear energy, scientific and technical cooperation, medicine, the environment, tourism, plus sports.

I would like to single out the social sector. It often has a conflict capacity, and people evaluate the work of governments in general judging by this sector. This year, we hope, a pension agreement will be signed for workers, and with the adoption of this decision, it will be easier for people to change their place of work within the union. This is the labour mobility to which we aspire in general. People will have the choice of where to retire.

And my fourth point concerns international cooperation. It is necessary to continue and, if possible, complete negotiations on the establishment of free trade areas with a number of countries. Mr Sagintayev (Bakhytzhan Sagintayev) already enumerated them: Egypt, Israel, India, Iran, Serbia and Singapore. It is necessary to establish cooperation between the closest integration formats, namely the Eurasian Union and the CIS, and develop an agreement on trade and economic cooperation with the People's Republic of China for signing.

There are also other topics. We will consider them later at the meetings of the Intergovernmental Council.

These are Russia’s assessments.

−       Directive On the Progress of Work to Establish a Body for Investigating Flight Accidents;

−       Directive On the Macroeconomic Situation in the Eurasian Economic Union Member States and Proposals to Ensure Sustainable Economic Development;

−       Directive On the Status of Mutual Trade between the Eurasian Economic Union Member States in 2017;

−       Agreement on the Identification Labelling of Goods within the EAEU;

−       Decision On Endorsing the Regulations on the Drafting, Financing and Implementation of Interstate Programmes and Projects in Industry;

−       Directive On Issues Related to the Implementation of the Treaty on Pension Coverage for Workers from Eurasian Economic Union Member States;

−       Directive On the Date and Venue of the Next Eurasian Intergovernmental Council Meeting.

Question: You just signed an agreement on identification labelling of goods. When will this system become operational, are our partners ready to use it, and how will it start?

Dmitry Medvedev: This is an important subject related to digital labelling and the traceability of goods. In fact, this is what the common market is all about. In the past, it took decades to create a common market because it was necessary to understand how goods move, to monitor the paperwork and bills of lading, to analyse demand and supply, key trade flows. Now, all this can be done digitally.

You are aware of our fur coat experiment with fairly inspiring results. Even though fur coats are an expensive item, the fur coat identification labelling pilot programme led to a 13-fold increase in the numbers of product. Retail sales increased seven times over. We are now ready to gradually move on to ID labelling of pharmaceutical products. Tobacco and some other products are ready for this kind of labelling and tracking. We plan to cover almost all categories of goods when we are done.

We managed to come up with a common position within the EAEU. This is a laudable achievement.

Question: Is a 100 percent common EAEU market realistic? Is that what the union is striving for? Or are the countries turning towards protecting their national interests?

Is an absolutely free market for goods, works and services achievable in principle? Working towards this goal is necessary. In this regard, we still have much to accomplish concerning the restrictions in all EAEU states. We agreed that we would lift them. Last year, we repealed 10 restrictions, but there are a few dozen more to go.

Question: When will the decision be made on the threshold of duty-free online commerce in the EAEU and will it be a single threshold for all member countries, or will each state establish its own? What level is acceptable for Russia?

Dmitry Medvedev: The level must be common for everyone, otherwise the market will be fragmented. Such a decision has been adopted, and it has already been embodied in EAEU acts. In accordance with this decision, until the end of 2018, the duty-free limit for goods imported as part of online commerce is set at 1,000 euros. From 1 January 2019 this limit will be set at 500 euros, and from 1 January  2020, 200 euros. This is the upper limit, and the countries can stick to it. A number of countries have already introduced more stringent requirements. The issue is not only about this limit. It is also about duties levied on goods that are imported over and above the established limits. This is also to be decided by each state separately.

Regarding the threshold that is necessary and appropriate, discussions on this topic continue, but EAEU benchmarks have been set by this decision. That is, this is the upper limit, a lower limit can be different. In any case, it is necessary to find a balanced solution, which, on the one hand, will protect the domestic market and domestic producers and, on the other, will maintain the ability to buy goods through online stores located in other countries.

Question: What doors will you open as part of cooperation on IT?

Dmitry Medvedev: To our friends and partners, we can open any doors that you yourself can open. We are interested in the IT industry from friendly EAEU countries to expand beyond their respective home countries. The market is truly common for our countries, especially the digital, the IT market. All the more so as it is still fairly small in the Eurasian Union. We need to grow our own IT companies.