Dmitry Medvedev: "All our nations benefit from participating in the Eurasian Economic Union. From January to March, mutual trade rose by about one third compared to the same period last year. Exports to third countries grew at about the same rate. This represents a $30 billion increase in absolute terms."

List of the heads of delegations participating in the Eurasian Intergovernmental Council meeting: 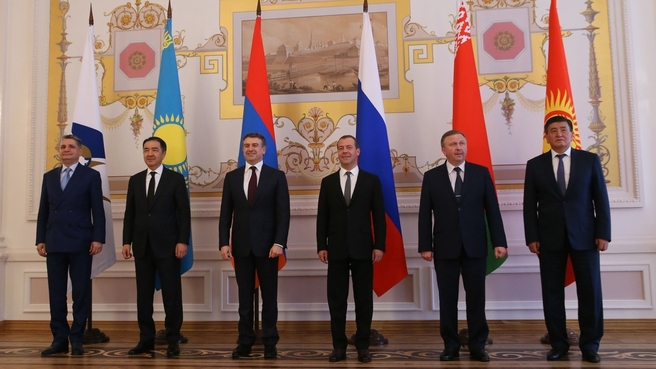 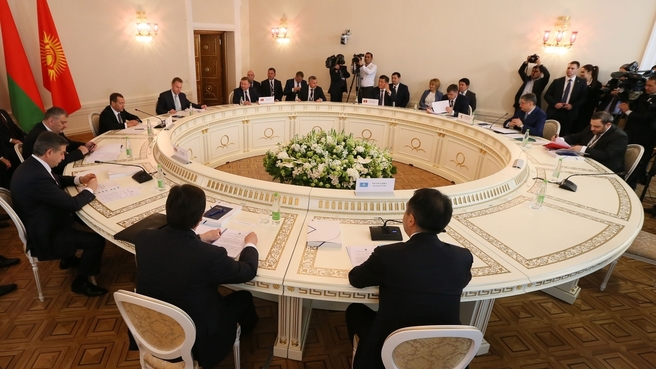 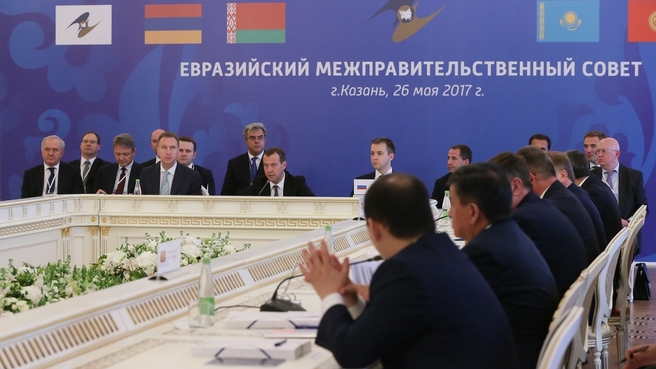 All our nations benefit from participating in the Eurasian Economic Union regardless of any current fluctuations or difficulties. The more areas that are integrated in reality, not merely on paper, the better it will be, the more opportunities there will be for each participant to feel the effect of the common market, of joint projects, and ultimately of the union in general.

Even at a time when the world economic situation is not entirely favourable, the major socioeconomic indicators of our countries are improving. This is in part the result of our joint efforts. From January to March, mutual trade rose by about one third compared to the same period last year. Exports to third countries grew at about the same rate. This represents a $30 billion increase in absolute terms. Each of our five countries has positive trends.

A regulation took effect in May, which regulates the circulation of medicines and medical products in accordance with the common principles for all five countries.

We have managed to lift the major barriers to the flow of goods, yet the flow of services, capital and labour still faces barriers. In the coming years we have to end approximately two dozen restrictions in industry, agriculture, energy, and technical regulation.

We are interested in creating the best possible conditions for our entrepreneurs to work on the union’s unified market, in setting up administrative procedures in such a way that they do not pressurise business, so as to help our companies successfully compete with colleagues from third countries. We have to complete as soon as possible the creation within our union of the so-called “single window” for dealing with foreign trade transactions so as to gradually move on to transborder paperless trade.

All the documents that we adopt should not make conditions for business worse. This is why we launched a procedure for assessing regulatory impact, which has been fairly effective in our country and in some other countries of the inion. And last year it was used for the first time in the Eurasian Commission format.

Transitioning away from paperwork and toward electronic documents, online technologies in education, medicine, big data systems, the emergence of driverless transport and the so-called internet of things – these are all elements of the digital economy.

We are already taking advantage of some of these opportunities within our integrated information system in the Eurasian Economic Union. The Digital Economy national programme is currently being developed in Russia by experts and business representatives. We could organise work in the same format in our union as well in order to fill the digital agenda.

In the near term, we have to form a regulatory environment and create a technological foundation in the union for the development of digital technologies. Today we are signing corresponding documents.

Last year agricultural production across the union grew by 4 percent, in our country it is close to 5 percent. We must make more productive use of our advantages, coordinate our national agricultural policies, and use various modern technologies and innovative practices.

A well-developed competitive environment creates powerful incentives for innovations. I think it’s really important that the measures we are taking to support competitive principles in national markets be accompanied by supranational mechanisms. In fact, we have already agreed on unified rules for rendering industrial subsidies and on the voluntary coordination of such support measures for producers with partners.

- Eurasian Intergovernmental Council Directive on the Action Plan (Roadmap) to Eliminate Exemptions and Restrictions on the Domestic Market of the Eurasian Economic Union.

- Eurasian Intergovernmental Council Directive on Ensuring the Holding of National Population Censuses during the 2020 Round in the Eurasian Economic Union Member States.