The Prime Minister answered questions from the Russian media on the results of his visit to China. 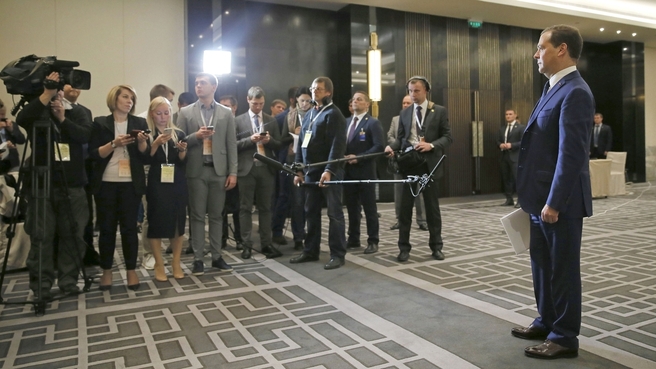 Question: Your visit to China is coming to an end. You attended China’s first International Import Expo in Shanghai, where Russia received the status of a partner country. You also took part in a regular meeting of the heads of government of Russia and China and signed a number of bilateral documents. Which areas of continued cooperation with China would you highlight? Which industries hold the best cooperation prospects? For example, have you reached an agreement on a substantial increase of Russian agricultural exports to China?

Dmitry Medvedev: All of you saw what happened in Shanghai and Beijing. Let’s begin with Shanghai. It is a really interesting idea of our Chinese partners to hold an annual imports exhibition. It is especially interesting that it has been proposed by China, which is famous for its exports capability. It has huge revenues from exporting its products around the world. At the same time, it is also a very large market, which, as our partners say, is open to products from many countries. Russian companies have come to the expo. I looked at what they brought and saw that they offer goods of the biggest interest to the Chinese market, including agricultural products and foods. China has a very large population, as you know, which is why it is a major food importer. Russia as an agriculture leader must use this opportunity to enhance its positions.

This brings me to the second part of your question. Indeed, I discussed agricultural deliveries with President Xi Jinping, during restricted format talks with Premier of the State Council of China Li Keqiang and the intergovernmental consultations, that is, during the 23rd  meeting of the heads of government. There were certain restrictions until recently; they concerned the import of poultry meat and dairy products. We are working with our Chinese partners to gradually lift these restrictions. Today we signed two protocols on this subject. The document was signed for Russia by Rosselkhoznadzor (the Federal Service for Veterinary and Phytosanitary Surveillance). This will allow our agricultural producers to enter the Chinese market. The Chinese are consuming a lot of dairy products, unlike in the past. They also eat a lot of meat. This is why the opening up of these segments is very important. I would like to emphasise that this concerns regional suppliers, who must operate with due regard for the sanitary and epidemiological requirements and the regionalisation principle we have chosen in order to increase the delivery of our agricultural products to the Chinese market.

Another major sphere of cooperation all Chinese officials highlighted today is soybeans delivery. The demand for soybeans is huge in China, which has a vast soybean market. China imports some 95 million tonnes of soybeans a year, including more than 30 million tonnes from the United States. Considering the current trade problems in US-China relations or, more precisely, the protectionist US policies towards China and several other countries, European countries as well as Russia, a part of the soybean segment on the Chinese market has become available. We have agreed with our Chinese partners that we will reinforce our positions in this segment, which is quite good for us. On the one hand, this offers an opportunity to bring our products, including soybeans, to the Chinese market. On the other hand, we can increase soybean production in Russia, primarily in the Far East. This is where we grow soybeans, and now we must prepare new fields for cultivating more soybeans.

Therefore, we can report very good results. We have also signed documents in other spheres. These concern high technology and high-tech cooperation, including space exploration, energy and several other sectors where we are cooperating. As usual, we signed the final protocol following these consultations. Traditionally signed by the prime ministers of Russia and China, this protocol reflects the outcome of the talks and, ultimately, includes instructions on the further operation of our agencies. The outcome is very positive. We hope that it will take the form of new achievements in our partnership with China.

Question: Two weeks ago, you instructed the supervising Deputy Prime Minister and the Minister of Energy to take additional measures to stabilise fuel prices in the domestic market. Are you satisfied with the results, or do they need to do something else?

Dmitry Medvedev: This issue is quite pressing. We hear all sorts of comments about prices going up and back down. I have just signed a government resolution on agreements between federal executive authorities and business entities. Under this resolution, the Ministry of Energy and the Anti-monopoly Service are required to conclude agreements with economic operators on measures to stabilise and develop the domestic market for petroleum products.

Indeed, they reached an agreement as I instructed, because the alternative was simple: either these agreements will be worked out or prohibitive duties will be imposed, that is, restrictive measures for export operations. Oil companies accepted this reasoning and agreed on the former option. Based on this document – which comes into force at the moment of signing – agreements with these companies will be concluded. There is a list of companies. I will not name every company, but the largest ones on the list are Gazpromneft, Lukoil, Rosneft, Russneft, Surgutneftegaz, Tatneft and others. I think this arrangement will put these relations on a legal basis.

The government will oversee how these agreements are enforced. If I see that the agreements are not being executed or executed loosely (no matter which company does this, in the end it will be obvious from the seller and buyer prices, and most importantly – at filling stations, because this is what consumers are concerned about), then we will have to make the other decision, as I said, and sign a resolution imposing prohibitive export duties. I hope the situation will not come to that and these agreements will be implemented properly. Deputy Prime Minister Dmitry Kozak and Minister Alexander Novak will have to oversee the implementation of these agreements.

Dmitry Medvedev: One has the impression that the fiercer the political infighting in the United States, the more frantically they slap sanctions on various sovereign members of the international community. Today, they held elections, and the outcome can be viewed differently, but this is their internal affair. It is clear that all sorts of sanctions, the talk of sanctions against Iran and the Russian Federation, restrictions on deliveries and imposing duties and quotas on the European Union and the People’s Republic of China – that all of this is being done in order to solve domestic political problems related to the [midterm] elections to Congress, that is, to the Senate and the House of Representatives, and lay the groundwork for the future. I don’t even mean any concrete participants in the political infighting, but this is very bad because it is shattering the international order. We spoke about this here, in the People’s Republic of China, as did President Xi Jinping. I also said as much while speaking from the rostrum. I noted that at this moment, a time bomb had actually been planted under the WTO regimes. Heads of the WTO, World Bank and IMF were also speaking about this. Because it is very bad!

Now let me focus on concrete measures. If we speak about Iran, there was no proof that Iran violated the nuclear deal, nor is there now.  President Vladimir Putin spoke about this, as did other players in international relations in this area as well as Europeans. Nevertheless, they took this decision. What will this lead to? It’s quite clear. What has been done with so much difficulty could be derailed. As I understand, Iran’s patience is not endless.  These decisions are causing popular protests over there. What we have striven for during a very long period could be ruined by the stroke of a pen. Moreover, let me emphasise this once again, no one – neither the United States, nor our partners in Israel, has provided evidence that Iran violated the nuclear deal.

I repeatedly commented on sanctions against Russia. At this point, there is nothing to add. We have adapted to various restrictions, and they even give us a certain scope for streamlining our economy and creating new economic mechanisms. This is why nothing critical is going to happen; I am confident in this. But all of this is unpleasant and will certainly force us to take certain decisions, if need be, including decisions to shore up certain major companies if they face sanctions. Of course, we will hold out, but it is too bad we have to waste time and effort on this.