The meeting took place as part of Dmitry Medvedev’s official visit to China. 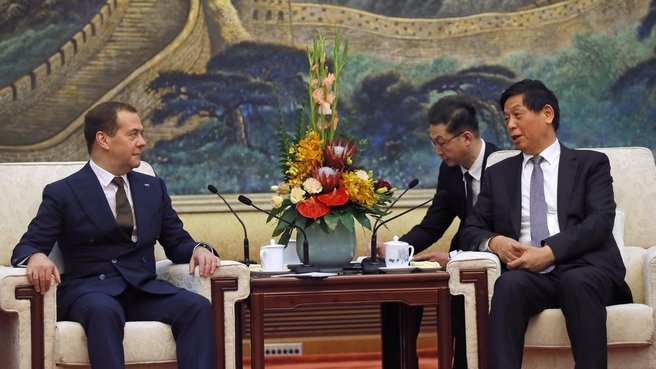 Li Zhanshu (via interpreter): Mr Medvedev, I warmly welcome you on behalf of the NPC. You participated in the first China International Import Expo, as well as the 23rd regular meeting of Russian and Chinese heads of government. The day before yesterday in Shanghai, you were received by President Xi Jinping. During the meeting, you exchanged views on a number of current issues in bilateral relations. This is evidence of the high importance that President Xi Jinping attaches to your visit, as well as to the overall development of Chinese-Russian relations.

This morning, you and Premier Li Keqiang had very detailed, substantive talks. This indicates the high level and special character of Chinese-Russian relations. In recent years, under the strategic leadership and thanks to the personal efforts of our leaders, President Xi Jinping and President Vladimir Putin, Chinese-Russian relations have entered a new era. Our interaction is a model for building relationships of friendship, harmony and amity between great powers and neighbours. Together we have made a strong contribution to the creation of a new type of international relations and human community.

The international situation is very complicated and alarming, with worrying trends such as the use of force, hegemony, unilateral actions and protectionism on the rise. At the same time, we believe that the modern world is like a global village, where the interests of different states are closely intertwined. Today, in fact, we live in a community that has a common destiny; this can be figuratively described as “I am with you, you are with me.” We believe that no single country alone can cope with challenges today, and no single country can live on a separate island of self-isolation.

However, there are forces that reject peace. On the contrary, they continue to brandish the sanctions stick and to impose sanctions on other countries. We believe that these forces are moving against the humankind’s common development trend. In this situation, I believe it is particularly important for China and Russia to strengthen their cooperation based on the back-to-back principle. I think that this form of cooperation is important and what we need today. We are ready to work together with Russia to implement the agreements reached by our leaders so as to advance our relationship to a higher level.

Mr Prime Minister, you and I are old friends. It is our first formal meeting, but we have met five times before, including when I accompanied President Xi Jinping on his visits. So I am ready for a detailed exchange of opinions with you today. I would like to use this occasion to ask you to convey my best regards to my colleagues Ms Matviyenko and Mr Volodin, the speakers of the two houses of Russia’s parliament.

Dmitry Medvedev: Mr Li Zhanshu, I would like to begin by saying that I fully agree with your assessment of Russian-Chinese relations, which have reached the highest level in our history, as well as with your views on the international situation, the economy and inter-state relations.

Indeed, our relations have reached a remarkably high level. We continue to develop them, as President Xi Jinping and President Vladimir Putin have agreed and in accordance with the decisions taken at the top and high level, including at the talks in Beijing and during my meeting with the President of China in Shanghai.

There are many contradictions in the modern world. However, instead of working together on many economic and other subjects, we often have to spend our time on combating negative trends and decisions taken in some countries for their own, and actually mercenary ends.

A great deal in this world depends on our two countries. We are not just neighbours, friends and major economies. We are also permanent members of the UN Security Council, whose voice must be heard at the international level. In general, any attempts to replace international organisations with surrogate decisions taken by individual countries or a group of countries against the interests of other countries are misguided.