Dmitry Medvedev’s visit to the Socialist Republic of Vietnam

Dmitry Medvedev’s address at the talks 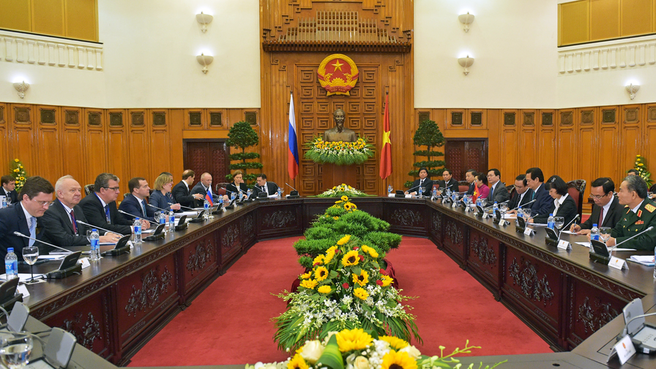 Our delegation is very happy to visit your country, all the more so as this year is quite special. This is why our delegation is visiting the capital of Vietnam and also Ho Chi Minh City in southern Vietnam in order to get a better idea of the events that took place there 40 years ago.

We will also be happy to welcome the Vietnamese delegation in Moscow during the celebrations of the 70th anniversary of victory in the Great Patriotic War.

Comrade Prime Minister, as you and I have noted, this year is quite eventful.

You and I have already exchanged impressions on specific aspects of our cooperation during the restricted meeting. I’m counting on productive extended talks. 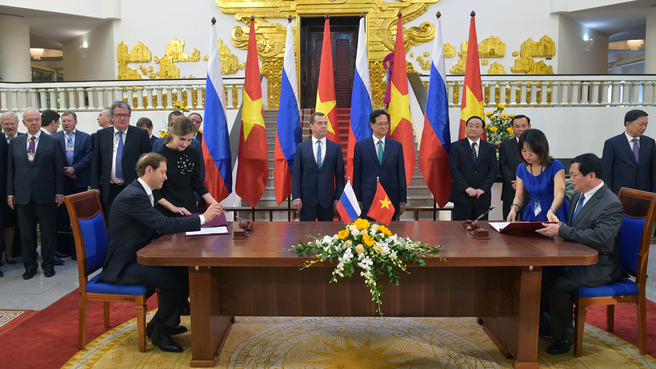 -         Roadmap of the High Level Russian-Vietnamese Working Group for Priority Investment Projects for 2015;

-         2015-2017 Action Plan to Implement the Cooperation Programme Between the Federal Service for Supervision of Consumer Rights Protection and Welfare (Rospotrebnadzor) and the Ministry of Healthcare of the Socialist Republic of Vietnam in Assisting the Socialist Republic of Vietnam Ensure the Sanitary-Epidemiological Wellbeing of the Population;

-         Basic Terms for Acquiring a 49 Percent Stake in the Statutory Capital of Binh Son Refining and Petrochemical Company Ltd.;

-         Joint Memorandum of Understanding Between Gazprom Neft PLC and the Vietnam Oil and Gas Corporation;

Following the talks, Dmitry Medvedev and Nguyen Tan Dung spoke before the media 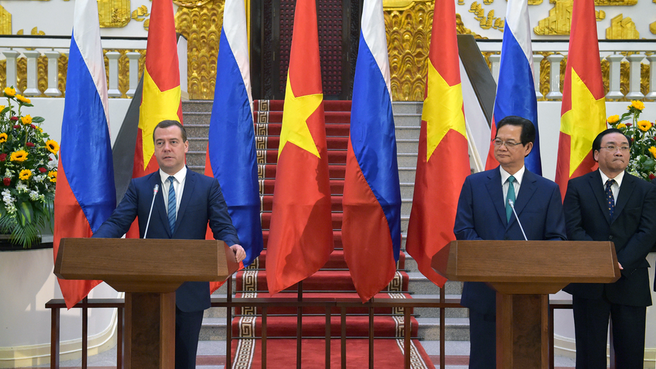 Nguyen Tan Dung (Via translator): Mr  Medvedev, dear Russian and Vietnamese friends. On behalf of the Government and people of Vietnam, I would like to once again warmly greet Prime Minister Dmitry Medvedev.

The Prime Minister and I have summed up the results of implementing key projects, we have focused on the results and the current issues in such areas as the economy, investment, trade, oil and gas, the nuclear power industry and military equipment. We believe that bilateral trade has decreased somewhat lately. In an effort to improve the situation, we have decided to instruct ministries, departments and national entrepreneurs to make an effort and to sign an agreement on establishing a free trade zone between Vietnam and the Eurasian Economic Union in the first six months of 2015, so that bilateral trade turnover can reach $10 billion up to 2020 …

Dmitry Medvedev: Mr Prime Minister, ladies and gentlemen, media representatives. My colleague and I have just completed our talks and I agree that they were held in a warm atmosphere, and that they fully highlight our relations as those of a strategic partnership.

We have reviewed virtually all aspects of our cooperation in great detail. We have discussed them, including economic and cultural cooperation, during the restricted and the extended meetings. We have also assessed the implementation of existing agreements and charted subsequent steps.

I would like to mention several issues that we discussed. First, I’d also like to say a few words about trade. Over the past five years, our trade turnover swelled by about 20 percent annually, and goods with high VAT content make up over half of it which is good in itself. Although the trade turnover dropped somewhat last year, we are confident that this is temporary. And we have charted measures for rectifying the situation. We plan not only to achieve our current goals but expand mutual trade turnover to $10 billion in the next five years.

The creation of a free trade zone between the Eurasian Economic Union and Vietnam is one way to accomplish this objective. We have reached agreements on virtually every parameter, we are finalising this document, and all major issues have been coordinated. I hope that we will be able to sign this document soon.

Investment and industrial co-production arrangements are another issue. We have just signed a plan listing priority projects for this year. In all, 17 such projects have been selected, and each project has its own “roadmap.” I hope that all of them will be implemented, including equipment and aircraft deliveries, the assembly of Russian cars and increased railway rolling stock manufacturing. These are the main items, and there are others too. I’m planning to discuss these issues in greater detail with representatives of our business community in Ho Chi Minh City tomorrow.

We continue to cooperate in the nuclear power industry, and we have discussed the current situation. We are expecting to conclude a general framework agreement soon and to stipulate a step-by-step project implementation deadline. My colleague has just noted that we have also discussed co-production arrangements for the oil and gas sector. We have discussed projects on the Vietnamese shelf and the performance of our joint oil and gas companies in Russia. We have agreed to continue providing favourable conditions for our companies in Russia and Vietnam.

We have also discussed cultural cooperation, including  science and education. I’d like to note that we regularly increase the quota for Vietnamese students in Russia. Currently, about 6,000 Vietnamese citizens, including some from state organisations, are studying in Russia. The number of state stipends has also been increased, and this is a good foundation for cooperation over the next few years and even decades.

As my colleague, Prime Minister Nguyen Tan Dung, has just said, we are holding these talks in the run-up to our respective historical anniversaries. This year, Vietnam is marking the 40th anniversary of liberating its southern regions and the 70th anniversary of proclaiming national independence. And Russia will celebrate the 70th anniversary of victory in the Great Patriotic War. Of course, we will celebrate these events in a special way, and we’ll be happy to welcome the President of Vietnam during the 9 May festivities in Moscow. And I’m planning to visit the Cu Chi Partisan Tunnels military-history complex, a symbol of the Vietnamese nation’s fortitude in its struggle against colonialists and aggressors, in Ho Chi Minh City tomorrow.

In conclusion, I would like to once again thank my colleague, the Prime Minister of Vietnam, for his warm-hearted reception, for the wonderful working conditions and for the useful talks. I’m confident that the results of our meeting will serve to strengthen our cooperation for the benefit of the people of Russia and Vietnam. Thank you for your attention.