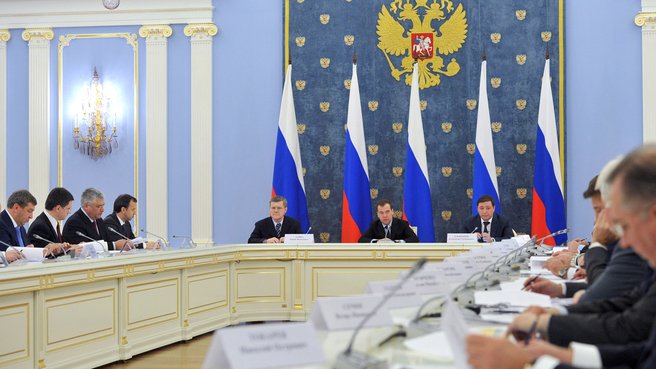 We will continue our focus on the North Caucasus today. We have a number of issues to attend to, including those that need to be addressed at the federal level.

We looked at the situation in the region’s healthcare and education at the most recent meeting of the Government Commission in Makhachkala on October 2. Today we will concentrate on the situation in the fuel and energy industry. This focus was proposed by Deputy Prime Minister Alexander Khloponin, because fuel and energy is indeed a problem in the North Caucasus. At our next meeting, we will look at the draft federal programme Development of the North Caucasus Federal District to 2025.

Dmitry Medvedev: "The number of facilities in the region already connected to gas mains has reached 90% on average. This is actually better than anywhere else in Russia." 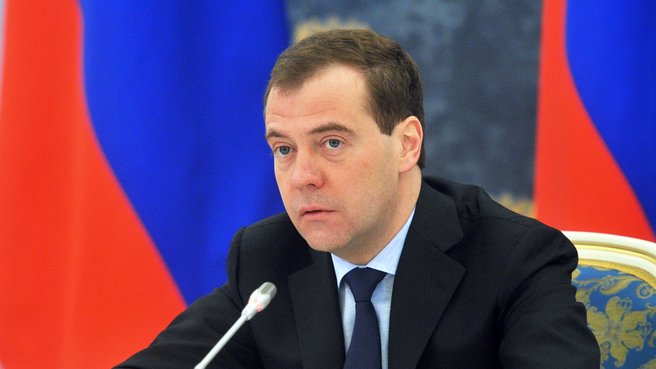 Historically, this region has been one of the oil production centres in our country. However, in the past few years, crude production volumes there have declined due to depletion of the main local oilfields. The region is also being crossed by several important oil pipelines, some of them transnational, including the CPC or Baku-Makhachkala-Novorossiysk pipelines. Please note that Gazprom has invested over 11 billion roubles in local gas grid development as part of its programme to connect Russian regions to gas supply mains. The number of facilities in the region already connected to gas mains has reached 90% on average. This is actually better than anywhere else in Russia. No other region has as such encouraging statistics on gas connection. This is a major advantage with regard to resolving social problems, and also good for the development of manufacturing. The North Caucasus has well-developed power infrastructure. Renewable energy sources have great potential here, especially hydropower generation. Investment in this sector will total about 100 billion roubles under the projects planned for 2012-2014, including 35 billion this year. It is certainly important to maintain a balance between building new generating facilities and distribution grids. Projects to build the energy infrastructure for the local tourist facilities should be the subject of special oversight.

Dmitry Medvedev: "The North Caucasus has well-developed power infrastructure. Renewable energy sources have great potential here, especially hydropower generation. Investment in this sector will total about 100 billion roubles under the projects planned for 2012-2014, including 35 billion this year."

What is the purpose of today’s meeting? It is not just about discussing the current fuel and energy situation in the North Caucasus. This alone could have been discussed some other time. Today I would like us to discuss as frankly as possible what we are going to do about the accumulated debt for the energy resources already supplied. That is why our colleagues who head various agencies, including legal authorities, are present; the situation is actually critical. The total debt owed by the region’s distributors to wholesale power suppliers stood at 20 billion roubles as of November 1. Payments from end users are significantly delayed and the court decisions with regard to back payments are not being properly enforced either. Intermediary companies involved are filing for bankruptcy to avoid paying. As a result, the system is malfunctioning and consumers are not receiving the required amount of electricity. The most outrageous cases should obviously be handled by law-enforcement agencies. We must make every effort to restore payment discipline in the sector. Modern technologies have to be introduced to keep records more effectively and transparently. As for companies which take the bad debts upon themselves and then file for bankruptcy, they should be dealt with separately. We are going to hear some reports on this today. This is what we are going to discuss today.

After the meeting, Deputy Prime Minister and Presidential Plenipotentiary Envoy in the North Caucasus Federal District Alexander Khloponin answered questions from the press. 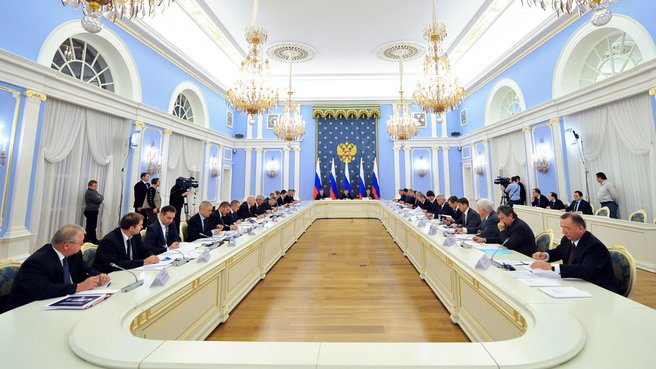 Question: What were the main topics of discussion for the meeting?

Alexander Khloponin: I believe that there are two main aspects of our work. One is the development of the fuel and energy sector in the North Caucasus. This is a highly important and significant strategic issue. We have charted specific guidelines, including the creation and development of vertically integrated companies. There are no vertically integrated companies in the Republic of Dagestan today. This explains all the problems facing us now, including the development of refineries, etc.

The second key aspect of the meeting was the horrendous system of non-payments. The figures are critical, and in various sectors they reach… For instance, these non-payments total about 20 billion [roubles] in the power industry and 40 billion in the gas industry. There is complete confusion in the structure of these debts. It is unclear where the debts come from, and how they are developing. It appears that private individuals are the main debtors. On the other hand, the facts show that private individuals are repaying virtually 80% of their debts, and this is quite a high figure, even compared to average nationwide statistics. Consequently, it is unclear where excessive losses come from. We call this a network imbalance, which totals 30%. In effect, we don’t have a gas-pipeline network, we have a sieve. And this is rather strange, because all these losses are subsequently written off. In this connection, we see the same thing happening in the oil sector, where substantial volumes of crude oil, about 20,000-25,000 tonnes a year, are siphoned off. And this is virtually uncontrollable. And then we are really surprised when we try to find out where all those numerous tiny refineries get their supplies from. Their upkeep, licensing and quality of work leave a lot to be desired.

I believe that Mr Medvedev has chaired an extremely in-depth meeting today. We discussed all these issues once again, including basic legislation, the issue of licenses, the work of law-enforcement agencies, as well as the objectives of our regions and territories. We have set fairly tough objectives in every area. I think that we will hold another preliminary meeting in the first quarter, at the end of the first quarter, and that there we will look at the outcome and deal with various pinpoint issues. I believe that the situation will start changing drastically in the near future.

Question: What will influence these changes?

Alexander Khloponin: First of all, we will establish law and order in the licensing system and we will reduce debts. We will also open several major criminal cases over the deliberate bankruptcy of companies, particularly in housing and municipal utilities. In addition, we will liquidate these incomprehensible and unlicensed tiny refineries and reduce surplus losses. All these tasks have been set, and they are stipulated in the protocol.

Question: Will you cut off power to debtors?

Alexander Khloponin: No. You know, we have been discussing this issue for a long time. There are different kinds of debtors. Unfortunately, in the republics, state and budget organisations owe money for power consumption. We have already managed to improve the situation here before the year is out, at any rate, as far as municipal agencies and state agencies are concerned. Many officials did not pay for power and gas consumption. A joke, really. We have also improved the situation in this area. By the way, the Chechen Republic is quite a good example. We stopped paying wages pending the submission of proof that they had paid all electricity bills. That’s how far we had to go. You laugh, but, in reality, if officials don’t pay, what can we ask from people and from top executives of companies and enterprises who do this? As a result, we have drastically improved the situation here. Over the past few months, 500 million roubles have been paid from the Chechen Republic alone. Can you imagine how all this works?

So our tasks are quite ambitious and the meeting was of great importance. I would like to stress once again that this is really a crucial meeting. In his conclusion, Mr Medvedev said that this was virtually the last chance for everyone to change their ways, to pull their socks up and to rectify the entire situation. We have a lot of work to do.