The meeting took place on the sidelines of the Eurasian Intergovernmental Council meeting. 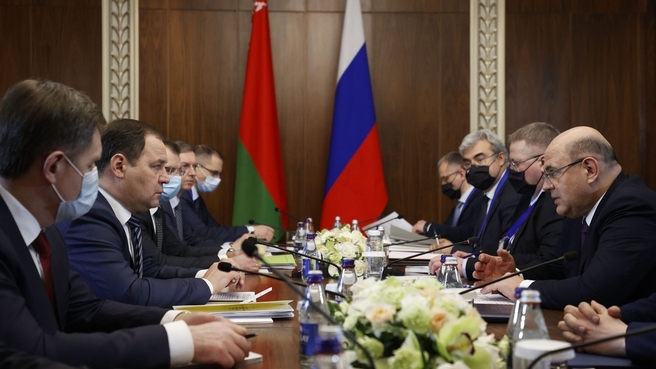 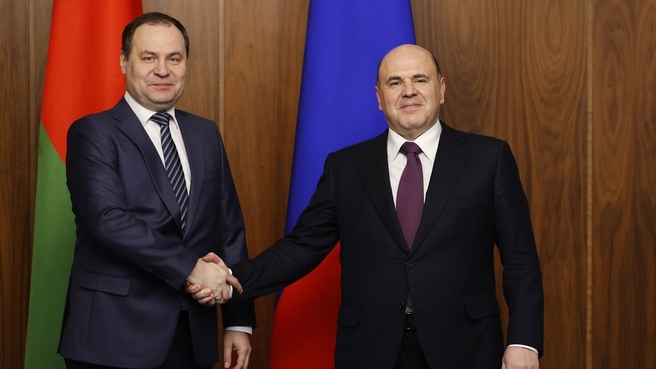 I want to heartily greet you and ask you to say hello and convey our best wishes to President of Belarus Alexander Lukashenko on behalf of President of Russia Vladimir Putin and from me personally.

Our meeting today in Nur-Sultan aims to strengthen our integration ties within the Eurasian Economic Union and to ensure the growth of trade and economic cooperation in the interests of our peoples. And, of course, not everyone is happy about it; the Western countries are trying to divide us and hinder our efforts. But being here during these difficult times, we show everyone that we stand together. President of Russia Vladimir Putin has spoken in detail about the current developments and outlined the objectives of our country and described the situation.

We sincerely value neighbourly, allied and brotherly relations with our Belarusian friends. Our peoples are united by a common culture, historical and spiritual values. This year, we mark the 30th anniversary of diplomatic relations and are interested in bringing our cooperation to a new, higher level, in strengthening integration in the Union State and launching new projects. It will allow for the creation of a common economic and social space, primarily in the interests of the citizens of our countries. And it will probably become the best response to the illegal sanctions of the West against Russia and Belarus.

Last year, we made considerable progress in terms of integration within the Union State. The main guidelines for the implementation of the Union Treaty and 28 union programmes, guidelines approved by the presidents of the Russian Federation and Belarus on 4 November 2021, are being put into practice on a systemic basis.

During the upcoming period, we need to focus on implementing the integration agreements and controlling the implementation of regulations and international agreements.

The Government of the Russian Federation has been coordinating the effort in this area with its Belarusian colleagues.

As for trade and economic cooperation, we note that it is developing successfully even despite the unfavourable international situation and the Covid-19 pandemic. In 2021, our trade grew to $38.5 billion, a rise of more than 34 percent on 2020. We have exceeded the pre-pandemic 2019 level by $35.5 billion.

Russia is number one in terms of accumulated investment in Belarus. There are nearly 2,400 companies with Russian participation operating in your country and this number is growing.  Major joint projects in the automobile industry, farm machinery making, and timber are being implemented.  It is quite important to create maximally comfortable conditions for bilateral business and launch new cooperation projects.

The construction of the Belarusian nuclear power plant is making good headway. New potential is being created in other areas geared to the peaceful uses of nuclear power.  Primarily, I am referring to the creation of a nuclear research and technology centre based on a Russian research reactor.

Last year, we restored air communications in full. Citizens of Russia and Belarus travel without restrictions to all airports open to international flights, among other things. We are seeking to promote person-to-person contacts to the maximum degree and strengthen interaction in education, science, and culture.

On Sunday, 27 February, Belarus will hold a referendum on the draft new constitution. And, of course, we wish our Belarusian friends success with this.

Quite recently, on 18 February, in Moscow, President Putin and President Lukashenko discussed the most important matters pertaining to our cooperation. I suggest that our governments focus on implementing the decisions adopted by the heads of our two states.

The floor goes to you, Mr Golovchenko.

Roman Golovchenko: Thank you, Mr Mishustin, delegation members. I am happy to see you again. It is our first meeting this year, but we talk regularly, and so do our presidents. We, government members, are in regular contact and our joint work shows great results. We have a permanent working group that considers current areas of interaction at the level of deputy prime ministers. Such issues appear regularly, and most of them due to complications that are forced on us from the outside. With most of them, we find acceptable and beneficial solutions. You mentioned trade, and you were correct. According to our statistics, it is even slightly higher, and it is the best result in nine years.

And all of this, as you said correctly, is happening despite the never-ceasing illegitimate sanctions and other attacks both on Belarus and Russia from the so-called collective West.

Therefore, our response to all this is an example of a successful partnership and allied relations that are tested in practice and are improving in this difficult environment. Our President said today at a meeting with security agencies that within the allied obligations between the Russian Federation and the Republic of Belarus, given that NATO is building up forces and equipment near our borders, the Belarusian armed forces and other military units provide security on the western borders of the Union State. As the President said, no bullet and no missile will hit the backs of the Russian soldiers from that direction.

So I think that we, while implementing the agreements reached last year and that are validated by the decree of the Supreme State Council, will definitely reach new objectives, and work is already underway. As we agreed, the implementation is being monitored and we regularly check the progress of the realisation of our agreements.

Let me remind you that by the middle of this year, by 1 July, we will sign one of the most important agreements in the package related to the principles of levying excise taxes. We have agreed upon a very important element, an agreement on customs affairs. All issues have been dealt with in a constructive way. I believe that this is a good sign, showing that the work has been organised efficiently and the principles that we agreed upon are working.

Naturally, there are numerous complications, especially for the Republic of Belarus that has long been under pressure from the outside. Nevertheless, I want to express appreciation for the constructive and brotherly approach to dealing with these complicated issues. Especially now, a time which will be difficult for the Union State in general, as well as for the Russian and Belarusian economies, so I think that it would be helpful to coordinate our approaches towards counter-sanction measures. I suggest we talk about this today, and of course, make use of this opportunity to discuss the current issues that were touched upon by the heads of state. So let us get down to business.