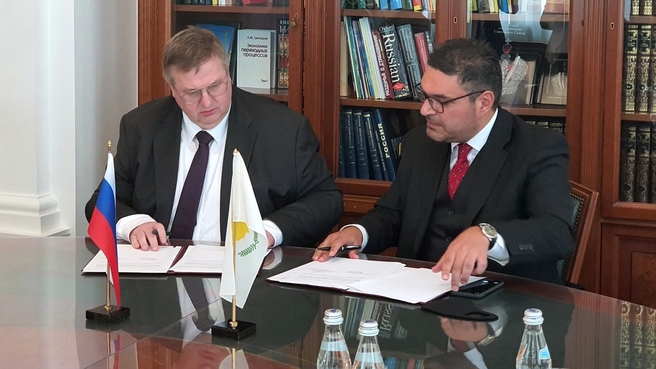 As part of the talks, the Republic of Cyprus agreed to the terms of the Russian Federation on amending the Russian-Cypriot Double Taxation Treaty in terms of increasing the withholding tax to 15 percent on dividends and interest.

“The talks were constructive in nature, which corresponds to the level of relations between our countries. The Cypriot delegation fully agreed with the terms of the Russian side. We have initialed the draft protocol to be signed in September 2020,” Alexei Overchuk said.

The Prime Minister visited the bridge, a temporary automobile border crossing and spoke with construction workers.
14 August 2020 Alexei Overchuk takes part in a meeting of co-chairs of the Russian-Tajikistani Intergovernmental Commission on Economic Cooperation
13 August 2020 Meeting on the construction of Baimsky Mining and Processing Complex

Mikhail Mishustin: “The Baimskaya range ranks among the world’s five largest undeveloped sites with rich deposits of copper, as well as gold, silver and molybdenum. Developing this area will support the entire Chukotka Autonomous Area, and will have a positive effect on reaching our federal goals, including increasing cargo volume on the Northern Sea Route and developing the Arctic zone in general.”
10 August 2020 Alexei Overchuk holds Russian-Cypriot talks