Dmitry Medvedev: “Cybercrime is among the top five global risks identified by the World Economic Forum. All the pros of digitalisation will be cancelled out unless we adopt effective measures to combat cybercrime and take control of the situation.” 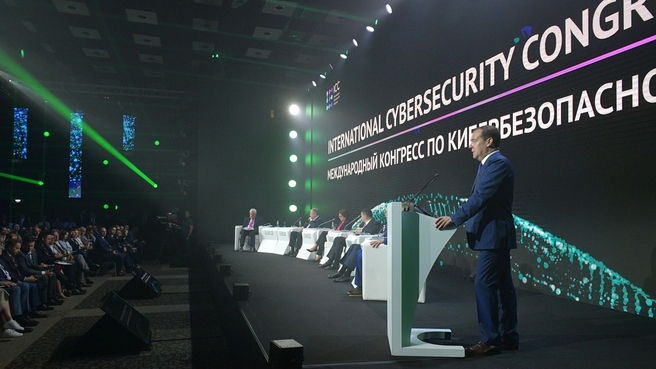 Dmitry Medvedev’s remarks at a plenary session of the International Cybersecurity Congress:

Good afternoon, Ladies and gentlemen, Colleagues,  I cordially welcome you in Moscow at the International Cybersecurity Congress. For the second year in a row, this congress has brought together government officials, representatives of international organisations, business people and security experts from all over the world. Interest in this event has only been growing. Importantly, the list of its participants includes not only experts in the relevant field, but also business people and government officials, because if the government fails to participate, all the efforts made by businesses and experts will be in vain. That is why several years ago, back in 2016, I hosted an interdepartmental meeting at Sberbank, where we started formulating our suggestions and measures to combat cybercrime and made the decision to strengthen the legislative framework, which was very weak then, and develop standards for protecting digital industries and all industries in general from cyber threats.

Just several years ago, we were only preparing for the onset of the digital era, failing to notice that we were already living in a digital world. This is the new reality, where progress is impossible without digital technology and the free exchange of data on the global network. Everyone knows that, regardless of various politicians’ and business people’s positions and platforms. Without digital development, regardless of the field in question, progress is unachievable.

As is known, digital services changed everything – from government and educational services to medical possibilities.

Over four billion people on the planet use the internet today, while five billion use mobile phones. This is more than half of the Earth’s population. There is no doubt that eventually this number will coincide with the world population rate.

Russia shows good performance in this regard. We are implementing our own digital economy programme. We have one of the highest levels of mobile communication and internet penetration as well as digital services development. Our internet access is among the cheapest in the world. Any country would dream of having the economic growth rates of the Russian internet segment called Runet. We really are rapidly moving forward there, with up to 15 percent growth per year. All this is good.

But digitalisation, rapid growth of technology and innovative developments also create risks and threats. Take cyberattacks, for instance. Analysts estimate that this year, the global economy will lose up to $2.5 trillion to them. Let that sink in. I just attended the shareholders’ meeting of the African Export–Import Bank, where I spoke about a different number: by 2020, Africa’s aggregate GDP will reach $2.6 trillion. This is an entire huge continent’s GDP. A developing one, true, but the scale is enormous.

Cybercrime is among the top five global risks identified by the World Economic Forum. The international expert community often prioritises this threat over any other, even such dangerous and horrific ones like terrorism and global environmental issues.

Like other countries, Russia is detecting tens of millions of cyberattacks on our public and private websites. I will give no examples as they are well-known; they concern various government websites and certain government officials.

All the pros of digitalisation will be cancelled out unless we adopt effective measures to combat cybercrime and take control of the situation. We have decided to formulate rules to protect digital and financial industries from cyber threats. We will also stimulate the development of Russian software; it is a necessity for us. Within the framework of the digital programme that I have mentioned, there is a section devoted to information security, where we are planning to establish mechanisms for supporting the development of Russian software and increasing its market share. 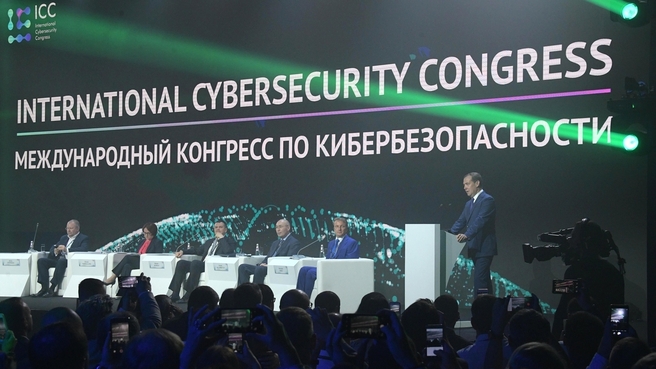 Dmitry Medvedev’s remarks at a plenary session of the International Cybersecurity Congress:

But what we need – this is a no less important task, and in this area, we still have done almost nothing – we need to develop common international security standards. Sometimes we hear from our partners: we have no confidence now, our contacts are not always successful, and we sometimes have disagreements, so we would rather not cooperate at all on this matter. This is a strange, if not dangerous, position that pushes all of us to the margins of international relations, back to how it was, perhaps, at the end of the 19th century. We need to develop global standards for security, especially because online crimes have no borders. I hope that this understanding will eventually come to all countries, to our colleagues in different countries.

Nevertheless, the first steps have already been taken. At the end of last year, the UN General Assembly adopted Russia’s resolution on countering the use of information and communications technology for criminal purposes and creating a working group on international information security.

This was the right decision. All the UN member states will be able to join the working group; almost 100 countries have already joined it.

We are open to cooperation, are ready to share our knowledge and experience in cybersecurity and, of course, we support an equal and fair world order in the digital sphere.

But, let’s face it: government efforts alone will not tackle cyber threats. Everyone should get involved in this process, including business representatives. And I am especially pleased to note that Russian businesses were among the first to support the creation of a centre for public-private partnership to fight cybercrime – the Centre for Cybersecurity at the World Economic Forum.

This is just the beginning. Today’s open dialogue shows that together we can really move forward in the fight against cybercrime and cyber threats.

I sincerely wish you success in your work. I am sure that this event, which is becoming a tradition, will be another step towards our secure digital future.

Dmitry Medvedev held talks with Prime Minister of Mongolia Ukhnaagiin Khurelsukh.
1 December 2019 Dmitry Medvedev congratulated Charles Michel on assuming the office of President of the European Council
27 November 2019 On 5 December, Dmitry Medvedev will speak about the Government’s performance in 2019 in an interview with 20 television channels of the first and second multiplexes
25 November 2019 Russian-Finnish talks