Mikhail Mishustin: “Our objective is to increase the share of Russian made aircraft to at least 30 percent of the fleets of the country’s major air carriers over the next nine years. Importantly, promising Russian developments have high potential.” 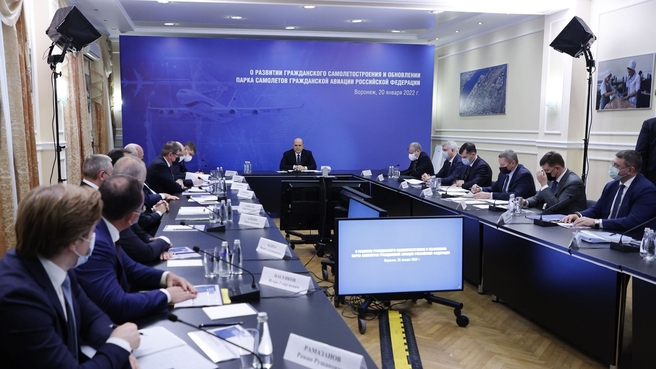 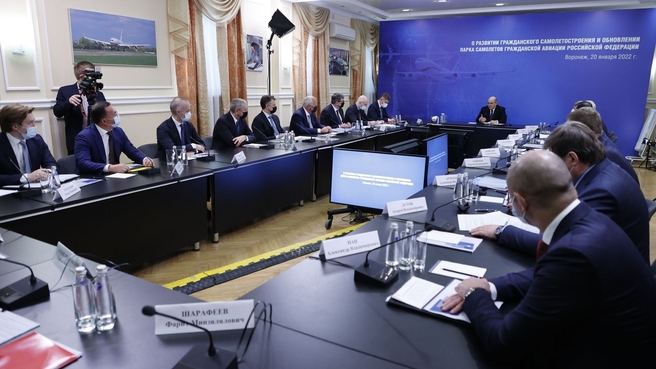 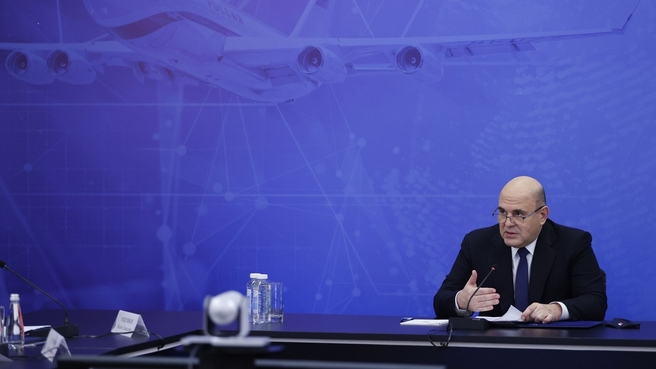 Welcome to everyone. Today we are at the Voronezh Aircraft Plant. At my invitation, the heads of the country’s major aircraft corporations and holding companies, who are involved in cooperation programmes on building new aircraft, are present here today. This is a good opportunity for all of us to talk in depth about the current situation and the plans for aircraft manufacturing development. We have instructions from the President, who has held a number of sectoral meetings on the implementation of key projects in this area. He has talked on many occasions about the need to develop the network of domestic air routes to reach the most outlying regions of Russia and to provide our people with high quality air service using domestically made aircraft.

During our travels around the country we often visit aircraft companies. I myself have visited a number of backbone aircraft manufacturing plants to get first-hand knowledge of the situation. Last year we visited the industry’s leading plants in Komsomolsk-on-Amur, Irkutsk, Ulyanovsk and Yekaterinburg. In Kursk we saw the latest in avionics. Today I met with the director of the Kursk plant; he reported on their progress at the exhibition. In December, we were in Perm, where we discussed some aspects of developing gas turbine engine building. We have allotted all the necessary resources to complete a range of engines, including heavy duty engines for wide-body planes. And today we are completing this stage of the work. Our task here is to outline a complete picture of the industry and also to determine the short- and long-term plans in this sector.

We have just seen the latest achievements by the domestic industry, including a number of innovative solutions in supersonic civil aviation technology. These are breakthrough technologies, which, I believe, will radically change people’s perception of the quality of flying very soon.

Russian aircraft developers and producers have been engaged in a large-scale effort to develop cutting-edge on-board systems and equipment. They have made substantial progress in this direction. Today, we saw several innovative solutions that we could not even imagine just five years ago.

We need to achieve full technological independence and ensure that we do not depend or rely on imported technology, foreign materials, or components that are not yet made in Russia. By delivering on this objective, we will remove the risks in terms of developing this sector, which matters so much for our country, and we will avoid any delays in bringing new-generation aircraft to the market. In addition, this will prevent any future manufacturing disruptions caused by unfair competition from foreign companies. This happened, for example, a few years ago with the enactment of trade restrictions against our receiving composite materials used in the wings of MC-21, Russia’s newest medium-range airliner which we have just seen. We learned to produce these materials on our own, and we can say today that what we are doing is in many ways better than the similar foreign components we used before we achieved full import substitution.

The President views the steady development of civil aviation as one of the core national priorities. In keeping with his instructions, we approved a state order programme until 2030 for civil aircraft made in Russia. This is an important mechanism for supporting this sector. The programme provides for supplying 583 modern aircraft, including for serving local destinations. More than 45.5 billion roubles have been earmarked in the three-year budget for building them. Of course, state corporations and airlines will also invest their own funds and use loan financing to expand their fleets, as well as borrow from the National Wealth Fund.

They can borrow up to 297 billion roubles from the National Wealth Fund over the next three years with a subsidised interest rate of just 1.5 percent per annum with a payback term of up to 20 years. These long-term loans provide an essential mechanism for state orders.

The primary purpose of these state orders is to ensure that, in this unstable and highly volatile market, companies can operate at at least 50 percent of their capacity. Higher production volumes will drive down production costs by a significant margin.

We do hope that in five years Russia will be making more than 100 civilian aircraft a year. This will enable United Aircraft Corporation to increase the share of high-technology products to 50 percent by 2030. This was the President’s instruction, as you probably remember.

Of course, it is fundamental that Russian aircraft are reliable and competitive. This is another strategic objective set by the President. We have been allocating funding to this effect. More than 122 billion roubles will be invested from the three-year budget as part of the Aviation Industry Development state programme. Another 112 billion roubles or so will go towards research and development from the state programme Development of Science and Technology.

Our objective is to increase the share of Russian made aircraft to at least 30 percent of the fleets of the country’s major air carriers over the next nine years. Importantly, promising Russian developments have high potential. We talked today with engineers at the exhibition. Much progress has been achieved. Of course, we expect these solutions to compete in the global market.

In order to add momentum to these development efforts, we will rely on priority funding mechanisms in the civilian aircraft manufacturing sector.

In December, the Government allocated more than 60 billion roubles for the MC-21 programme and creating after-sale service support for it. This is very important since it covers aircraft maintenance and repairs. In addition, more than 44 billion roubles have been allocated for developing the PD-35 high-thrust engine. We took this decision in December, in Perm. The Government will allocate an additional sum of about 2 billion roubles for carrying out another two major projects. One is to develop a wide-body long-range airliner, and the second one deals with the Il-114-300 regional airliner, which is being developed at the President’s instruction. This will replace the obsolete An-24 aircraft on local air routes in Russia.

It is very important to preserve Russia’s status as a world aviation power. Modern aircraft are a necessary transport link between all the regions of our large country, as the President has said on many occasions. In addition, aircraft manufacturing is a knowledge-intensive industry with rather high added value. It creates growth drivers, stimulates the development of related industries and helps create thousands of new jobs in the regions. I will quote just one example. By implementing the MC-21 programme alone, we are supposed to employ an additional – note – over 25,000 highly qualified specialists in Irkutsk, Ulyanovsk, Kazan and, of course, in Voronezh.

My suggestion is to discuss in detail the progress made on key aviation projects, consider the main difficulties facing the industry, including possible risks that may stand in the way of aircraft design and manufacturing programmes.

I say it again, please pay special attention to import replacement issues. I know – we are talking to engineers and management: this is complicated, expensive work. We will need the joint efforts of enterprises, of industry, and governmental support. And, of course, we will have to discuss what needs to be done to reduce the cost of import-substituting parts and to increase their reliability.