The Deputy Prime Minister met with Co-Chair of the Russia-Iran Intergovernmental Commission on the eve of bilateral summit talks. 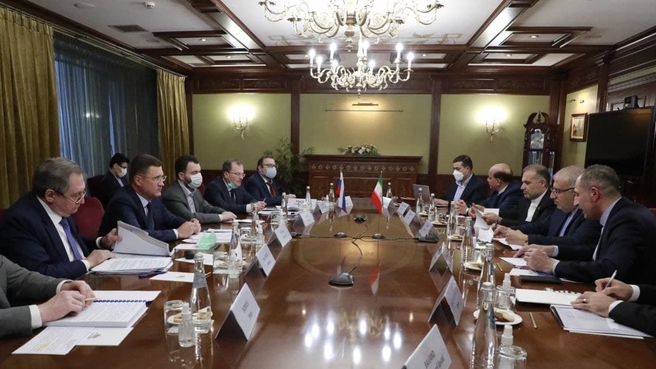 Deputy Prime Minister of the Russian Federation Alexander Novak met with Javad Owji, Minister of Petroleum of the Islamic Republic of Iran and Co-Chair of the Russia-Iran Intergovernmental Commission on Trade and Economic Cooperation.

The officials discussed prospects for bilateral cooperation in various areas of the economy. Over the decades of steady cooperation, Russia-Iran business relations have become versatile, especially in energy, noted Alexander Novak. “We are now implementing a number of major projects in energy engineering and other branches of the economy and plan to work on several advanced projects. We are also successfully cooperating in multilateral formats in the framework of the OPEC+ agreement and on the sidelines of the Gas Exporting Countries Forum,” the Deputy Prime Minister emphasised.

According to Mr Novak, the two countries need to continue facilitating bilateral business cooperation. “We must continue to lower administrative barriers and create conditions to increase trade,” he said.

Mr Novak noted that in 2021 Russia and Iran set a new record in trade that exceeded $3.3 billion. The two countries are developing cooperation in combatting the coronavirus as well. They have developed supplies and production of the Russian Sputnik V vaccine in Iran, he noted.

The Iranian minister also mentioned the leading role of energy in developing bilateral cooperation. “We are interested in promoting multilateral relations with Russia in energy and using all emerging opportunities in general. We hope our leader’s visit to Russia will play a major role in further developing cooperation between our countries,” Mr Owji emphasised.