The heads of government discussed topical matters related to the expansion of trade, economic, scientific and technological cooperation within the CIS. They focused on implementing joint agro-industrial projects, including those in the livestock breeding sector, and on efforts to consolidate the common scientific space of the CIS member states.

List of heads of delegations of the CIS member states

The heads of delegations of the CIS member states:

Prime Minister of the Republic of Kazakhstan, Chairman of the CIS Council of Heads of Government Alikhan Smailov;

Prime Minister and Chief of Staff of the Presidential Executive Office of the Republic of Kyrgyzstan Akylbek Japarov;

Deputy Prime Minister of the Republic of Turkmenistan Muhammetguly Muhammedov;

Prime Minister of the Republic of Uzbekistan Abdulla Aripov. 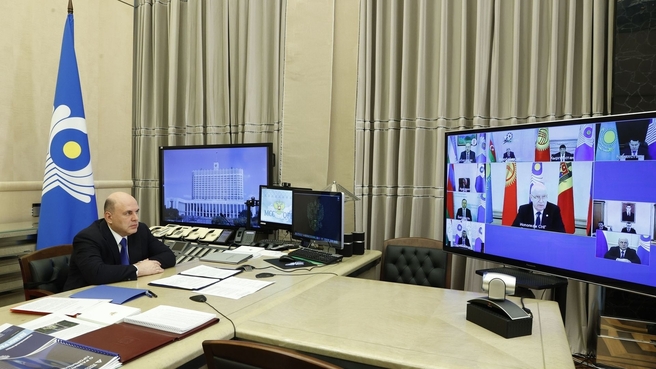 First of all, I would like to thank Mr Golovchenko and our Belarusian colleagues for this fruitful year and to wish Mr Smailov good luck and effective decisions as Chairman of the CIS Council of Heads of Government.

Once again, I would like to use this opportunity to cordially congratulate all the participants on the 77th anniversary of Victory in the Great Patriotic War. This sacred holiday and the memory of the feat of war veterans and home front workers unite our peoples.

I would like to emphasise that the Russian Federation attaches great importance to further developing the Commonwealth of Independent States. Our integration association has proved its effectiveness as an optimal venue for adopting joint decisions to strengthen trade, economic, scientific, technological, social, cultural and humanitarian cooperation in the interests of the population of the CIS member states.

Importantly, trade ties within the CIS got stronger at the end of last year despite the challenges facing the global economy. Russia's trade with its CIS neighbours grew by more than 30 percent to $96 billion. The CIS countries’ overall trade with other states and regional integration associations has also grown.

Our joint coronavirus response and relief efforts have been a vivid example of our constructive interaction. We expect to work in the same coordinated manner in other priority areas.

Of particular relevance are the coordinated actions of the CIS member states in the context of the unprecedented sanctions imposed on Russia and Belarus. The unfriendly states, which have unleashed a full-scale economic war against us, are pursuing their own opportunistic interests. Their goal is to cripple our national sovereignty, destroy the foundations of our statehood, and at any cost keep up the illusion of the dominance of the United States and the collective West in global politics and the economy. They are striving to gain non-competitive advantages and resolutely preclude the development of a system of fair and equitable interstate relations. And their most coveted objective is to bend to their will those who disagree with their claims to hegemony.

These unfriendly countries are not hiding their intentions to paralyse foreign trade with Russia, and inflict maximum damage to its economic and social development. However, given the globalised nature of the economy and trade, their sanctions – countered by our retaliatory measures – are boomeranging at the West.

These sanctions are also completely illegitimate under international law. They are disrupting trade and investment ties, and damaging the environment for doing business; they have brought the world to the brink of a major economic crisis fraught with dire consequences for all states.

It is obvious that the sanctions confrontation requires us to make certain adjustments to our cooperation. We will need to place greater emphasis on internal strength, opportunities and resources, find new areas for joint growth, boost the production of goods and services, strengthen technology and food security, raise our citizens’ living standards and stimulate business activity.

I would like to cite an example from the positive experience of the EAEU. In March, the Eurasian Economic Commission approved a list of measures to improve the resilience of its member economies, including their macroeconomic stability. They are being successfully implemented. Since the five EAEU members are also part of the CIS, I propose using this anti-crisis programme to strengthen trade and economic cooperation in the CIS.

A working group for monitoring the economic situation met at the end of April; it included representatives of governments, industry-specific CIS bodies and the interstate bank. They worked out specific proposals on responding to emerging challenges. This substantive work must continue.

At the national level, in turn, Russia has concentrated on increasing its economic stability. In keeping with President Vladimir Putin’s instructions, the Government is taking measures to ensure the smooth operation of Russian businesses, help the most vulnerable sectors, expand entrepreneurial freedom, and support Russian citizens, primarily families with children.

There are decisions intended to fill markets with goods, including with the help of import substitution, and to create a green corridor for equipment, raw materials and components supplies.

Easy-term loans are issued to investors in backbone companies. The profit tax and insurance payments have been reduced for a number of companies. The cap on transactions processed via the faster payments system has been increased to 1 million roubles.

We have retained favourable mortgage programmes and extended special investment contracts for companies that have come under sanctions. We have lifted the Covid-19 restrictions for chartered flights and resumed air services with more than 50 countries.

The set of measures to strengthen the economy amid greater sanctions pressure is designed to support the construction industry, the industrial sector, transport, as well as the housing and utilities infrastructure.

The decisions we take are helping the industries to adapt to the new conditions more rapidly and readjust their logistics chains. We will continue to react promptly to changes in the situation and strengthen our objective competitive advantages. The focus is still on efforts to get rid of the dollar in the economy and strengthen Russia’s economic and technological sovereignty.

In a period of turbulence, we think it is important to do all we can to prevent the actions taken by unfriendly countries from affecting economic cooperation within the CIS.

Russia suggests that we pool efforts within the CIS and be more proactive in using the multilateral mechanisms that have proved their worth. I am referring to the Free Trade Area Agreements, cooperation in the area of transport and logistics infrastructure, and the expanded use of national currencies in mutual payments, which is particularly urgent, because the dollar and the euro are increasingly often used as a tool of political pressure and economic blackmail.

Further stable growth requires that we establish cooperation in new spheres, including investment and services. It is necessary to finalise the negotiations on the draft Agreement on Free Trade in Services and sign it.

We are in favour of forming new multimodal transport corridors based on the huge transport potential of the Eurasian region.

In the area of financial markets, our priority is to encourage banks from the CIS member countries to join the financial messaging system of the Bank of Russia, organise an intersystem coupling of the Mir payment system with national payment systems, and secure the opening of bank card acceptance infrastructure.

As for sector-specific cooperation in the CIS, we will have to establish new collaboration, for which additional opportunities are opening today.

Global economic relations are going through a period of system-wide transformation. It is important, therefore, that we focus both on tactical objectives and joint actions with a strategic perspective.

We suggest focusing our efforts on creating a favourable business environment in the entire CIS space and improving the business and investment climate, taking into account the most effective international and national practices.

The West is trying to isolate us from the world economy. But it will fail to do so. We will adjust to the new realities and ensure the progressive development of the economy. Russia is used to working in the face of sanctions. They will not prevent us from strengthening constructive interaction with friends and partners.

We set great store by the trust-based and open relations with the CIS countries. We strictly implement all agreements and respect the interests of each other. I am confident that this is a good basis for achieving new large-scale goals for the benefit of our countries and peoples.