Mikhail Mishustin: “Over the first six months of this year, our mutual trade grew by almost 27 percent and foreign trade by more than 25 percent. The agreement on the free trade of services will expand opportunities for economic cooperation even further. We have made serious progress this year towards approving this important document. Now we need to finish the negotiations and enter the signing stage.” 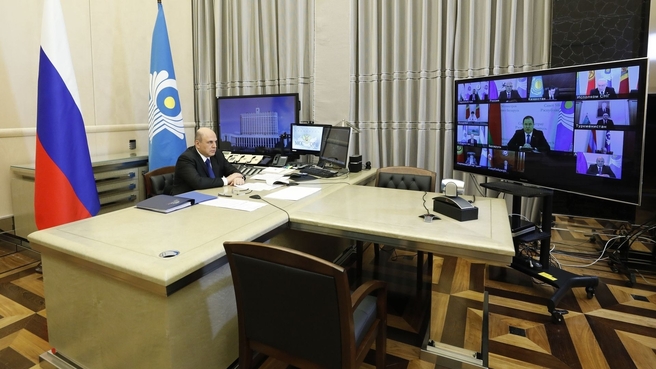 First of all, I would like to welcome Prime Minister of Kyrgyzstan Akylbek Japarov and congratulate him on his appointment. Prime Minister of Moldova Natalia Gavrilita is also participating for the first time. We hope that Moldova will continue to be active in the Commonwealth and make a constructive contribution to our joint efforts to strengthen trade and economic cooperation within the CIS.

This year, the Commonwealth marks its 30th anniversary. Over this relatively small lifespan, it has become an effective cooperation platform that has repeatedly proved its relevance in the international context. Our leaders also affirmed this at the meeting of the CIS Heads of State Council last month. The presidents specifically stressed the importance of continuing to strengthen cooperation in trade and the economy.

The pandemic has been a serious test for our countries and the rest of the world, causing a decline in business activity. Nevertheless, the CIS economies are gradually recovering. Over the first six months of this year, our mutual trade grew by almost 27 percent and foreign trade by more than 25 percent. The GDP across the Commonwealth has grown by nearly 4.5 percent. The amount of cargo shipments is growing as is the scope of industrial production.

The prompt action we took to ensure the stability of our common market has made these results possible.

The agreement on the free trade of services will expand opportunities for economic cooperation even further. Services account for more than a half of the CIS countries’ GDP. We have made serious progress this year towards approving this important document. Now we need to finish the negotiations and enter the signing stage. We hope the agreement will be joined by as many countries as possible.

In addition to boosting economic cooperation, our priority is countering COVID-19. We need to take measures to break transmission chains, with vaccination playing the essential part in this. Russia pays utmost attention to these matters.

We also continue to assist our friends in the CIS. We have sent over one million free test kits for diagnosing the infection to CIS countries. Russian vaccines are delivered to all states in the Commonwealth.

We are honouring agreements to set up licensed production facilities at local sites. We are ready to provide scientific and methodological support to medical specialists.

In late May, the CIS Cooperation Agreement on Sanitary Protection of the Territories and the Medium-Term Plan of Joint Actions to Counter the Spread of Infectious Diseases were signed at a meeting of the CIS Heads of Government Council. Russia has already completed intra-state procedures, so that the agreement can enter into force. I am urging the partners to complete this work in the near future. It is necessary to act jointly, so as to shield people from new waves of COVID-19.

The situation with the COVID-19 pandemic has also affected intra-CIS migration flows. In October, the presidents of our countries agreed to expand migration cooperation. A statement containing common approaches in the context of pandemic-related challenges was passed.

This implies the need to update the legal framework and to upgrade digital platforms for streamlining employment processes, including the Work Without Borders electronic service.

Colleagues, I would like to dwell on the climate agenda. Today, everyone is aware of the importance of converting to low-carbon and low-emission development and reducing greenhouse gas emissions.

The global conversion to green economy and efforts to reduce demand for traditional hydrocarbon fuel are picking up momentum, while the alternative power industry continues to develop.

Work in this field will prove more effective if all the concerned countries start cooperating. The climate’s preservation is a task facing the entire human race. We will have to conduct large-scale and intensive work involving a wide range of specialists, public associations and states. President of Russia Vladimir Putin noted this while speaking at Russian Energy Week.

The Eurasian Economic Union has already adopted a number of decisions. The five member countries have agreed to deepen their climate-related cooperation. Participants in the CIS Heads of State Council Meeting also devoted substantial attention to this matter.

The CIS now serves as a promising venue for cooperating on the climate agenda and for exchanging best practices on reducing toxic emissions.

It is necessary to establish a system of domestic climate regulation in the CIS region. The restructuring and modernisation of basic industries and the creation of a new technological mode is another important task. We will have to work hard in order to make the transition from raw-materials development patterns to an innovation development concept.

Furthermore, it is important to avoid using the climate agenda as a lever of political pressure or an instrument of unfair competition in the markets for goods and energy resources. Therefore, our actions should be aimed at maintaining an open and non-discriminatory trade regime, and compliance with the rules of the World Trade Organisation and the principle of voluntariness of climate efforts. Only in this way will green trends positively affect the development of our states.

In conclusion, I would like to raise one more question. Russia has nominated Moscow as a candidate city to host the World Expo 2030. Russia has been a constant participant in the exhibition movement since the first event, which took place in London in 1851. However, Russia has never hosted World Expo. We believe that the time has come.

Modern Moscow is one of the most dynamic megacities, with a developed infrastructure and up-to-date transport. Over the past few years, the Russian capital has repeatedly confirmed its competence in hosting big events, and that it can provide comfort and safety for participants during events of a global scale. All these factors mean Moscow can be entitled to host World Expo.

The theme of the Russian exhibition is Human Progress: A Shared Vision for a World of Harmony. It is our way of calling on the international community to direct efforts towards creating a more equitable and sustainable world order, in which human comfort would be inextricably linked with living in harmony with the environment.

We are working to promote our bid. We are grateful to some of the Commonwealth countries that have already officially supported it. Every vote counts.

I am sure that holding the Expo in the CIS would provide an additional incentive for our region’s comprehensive development and integration.

Colleagues, I would like to circulate a letter in connection with this and ask you to consider it and give the necessary instructions to those responsible for the issue.

In conclusion, I would also like to thank Belarus for the work carried out during its chairmanship of the Commonwealth of Independent States, and personally, Mr Roman Golovchenko. And of course, I wish success to Kazakhstan, and Mr Askar Mamin, who is taking over the chairmanship of the CIS next year.

Mikhail Mishustin: “The January holiday season is an opportunity to relax, to care for one’s health, to get vaccinated and revaccinated if six months or more have passed since the first jab. We can help doctors fight the virus.”
1
Show More