Meeting of CIS Council of Heads of Government

The agenda of the meeting includes economic cooperation, overcoming the consequences of the COVID-19 pandemic, restoring the economic growth rate in the CIS member states, elaborating an action plan to implement the first phase of the Strategy of the CIS Economic Development, as well as boosting cooperation in innovation, transport security, interregional and border cooperation, and the peaceful use of nuclear energy.

Delegation heads present at the meeting

Delegation heads present at the meeting:

Deputy Prime Minister of the Republic of Armenia Mher Grigoryan;

Prime Minister of the Republic of Kazakhstan Askar Mamin;

Prime Minister of the Republic of Moldova Ion Chicu;

Prime Minister of the Republic of Uzbekistan and Chair of the CIS Council of Heads of Government Abdulla Aripov;

Chairman of the Executive Committee and Executive Secretary of the Commonwealth of Independent States Sergei Lebedev. 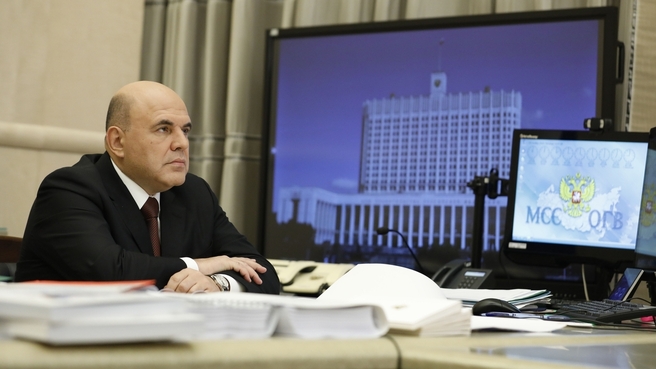 Meeting of CIS Council of Heads of Government

I would like to offer a special welcome to the prime ministers of Belarus and the Kyrgyz Republic, Roman Golovchenko and Sadyr Japarov, who are taking part in the meeting for the first time. I also would like to thank Mr Aripov and all our colleagues from Uzbekistan that is presiding in the CIS this year, for hosting the scheduled meetings even during this difficult period of time.

We are meeting today via videoconference. Unfortunately, the coronavirus is not backing down. Our competent agencies are teaming up to stop the spread of the disease. Once again, I would like to confirm Russia’s readiness to help its CIS partners and share its achievements. Russia has already supplied its test kits to all the CIS member states. Experts of the Federal Supervision Service for Consumer Protection and Welfare and the Russian Healthcare Ministry are consulting their colleagues.

Russia has registered coronavirus vaccines by two producers. We are currently creating conditions for Russian citizens to be able to get inoculated. Of course, we will be working on vaccine supplies to our brotherly nations and other countries.

COVID-19 is our common plight. The spread of this dangerous disease has affected all spheres of life, including the adverse impact on our economies. Like in the rest of the world, the economic activities in the CIS countries have gone down substantially. Our mutual trade and trade with third countries over the first six months of 2020 was lower year-on-year.

There are other aggravating factors as well. They include the complicated situation in Belarus, the Kyrgyz Republic and the escalation in the Nagorno-Karabakh conflict. Some members of the international community have made attempts to use the pandemic and the general instability in the world to score economic and often political advantages. They have also been imposing their interpretation of the economic processes. Sanctions and protectionist measures are being widely used to facilitate unfair competition. In these circumstances, the CIS countries must maintain constructive cooperation, coordinate their efforts and remain closest economic partners for each other. This is exactly what Russia intends to do.

In spring, we approved the Strategy for the CIS Economic Development for the next 10 years. Today, we will consider the draft action plan to fulfill its first five-year stage. The document takes the new economic realities into consideration.

The plan measures are intended to reinforce the positions of our countries in the world arena and make the economies of the participating states more competitive. They encompass the entire scope of tasks facing the Commonwealth – from the promotion of mutual trade and improvement of the business environment to more active cooperation in the sphere of innovations, just as our colleagues said.

The need for quicker digitisation of the member states’ economies and public institutions has also been taken into account. The situation created by the coronavirus has reaffirmed the importance of this work.

The agenda also includes a number of other issues, including nuclear power engineering, as well as the framework programme of cooperation in the use of nuclear energy for peaceful purposes for the next 10 years and a roadmap for its implementation. We support their adoption. We are also going to sign an intergovernmental agreement on transborder transportation of radioactive materials.

I want to point out that despite the complex situation caused by the pandemic, the programme of rehabilitating the territory of the states affected by uranium mining is being implemented. Today we will sum up the programme results for the past year.

The CIS is an international organisation with extensive accumulated experience. And this is particularly relevant right now, during the coronavirus pandemic. We need to learn how to support each other during these difficult times, promote multilateral cooperation and make decisions that will bring our countries even closer and strengthen our cooperation.

I would like to finish my remarks by once again saying thank you to Uzbekistan and Mr Aripov personally for performing the presiding country’s duties despite these far from easy circumstances. I also want to wish success to the brotherly country of Belarus that is taking over the presidency next year. I hope that next spring, as tradition goes, we will be able to meet in person in the capital of the presiding state, Minsk.