Prime Minister Dmitry Medvedev laid a wreath at the Tomb of the Unknown Mambi (Cuban independence fighter) and took part in a ceremony to transfer a memorial plaque in honour of Russian specialists that took part in restoring the National Capitol Building and the national flag of the Russian Federation for installation in the Mausoleum. 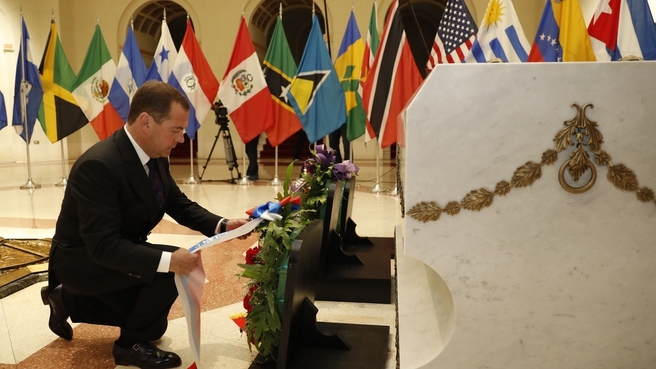 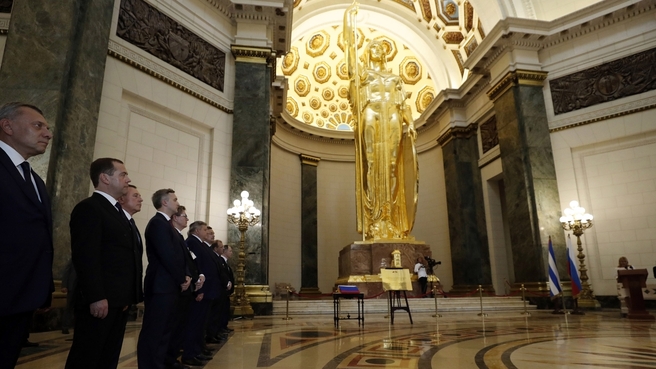 The ceremony of presenting the Russian flag to be installed in the Mausoleum, and a memorial plaque in honour of the Russian specialists who helped gild the Capitol dome 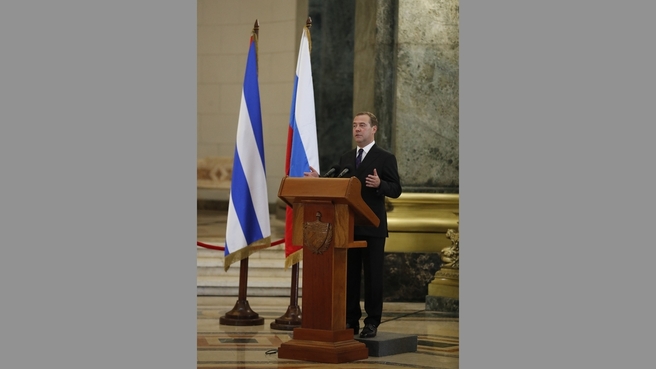 Dmitry Medvedev speaks at the National Capitol Building in Havana 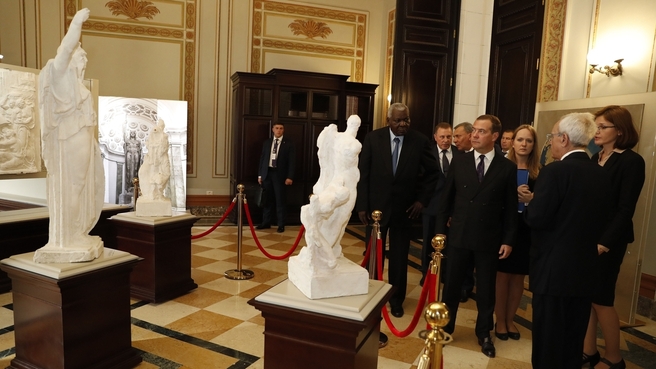 Visit to the National Capitol Building in Havana

The National Capitol Building was built in Havana in 1926-1929 to accommodate the Cuban Parliament.  In 1982, UNESCO included it on its World Heritage List as part of the architectural ensemble of Old Havana. In 2010, the Capitol was proclaimed a monument of national significance. At present, it holds the staff of the parliament – the National Assembly of People's Power of the Republic of Cuba.

A comprehensive restoration of the building was launched in 2010. It is expected to be completed by the 500th anniversary of Havana (November 16, 2019). Russian specialists restored the gilded roof of the building’s cupola and gold plated the Republic statue, a 14 metre high bronze statue in the Hall of Lost Steps.

The flags of the nations that fought in these wars together with the Cubans stand along the perimeter. These are the flags of Latin American and Caribbean countries and the United States, among others.

Dmitry Medvedev speaks at the National Capitol Building in Havana

It is a great pleasure for me to be together with my colleagues in your wonderful country today, which the world knows as a symbol of freedom and independence. And all the way through the development of their statehood, Cubans have felt the support of the people of Russia.

Their heroism and their support was a vivid example of Russians being always ready to come to the aid of Cubans to defend common values ​​together. In memory of Russian volunteers, we now present the Russian flag to Cuba to be installed at the Mausoleum dedicated to the unknown fighters for Cuba’s independence.

We are also giving our Cuban friends a commemorative plaque dedicated to the restoration of the gold coating of the National Capitol dome and the restoration of the Statue of the Republic – major projects implemented by Russian specialists. And this is further evidence of the genuine friendship that binds our peoples.

I am sure that the current and future generations of Cubans, and all foreign guests who come to Havana, will admire the unique architecture of the National Capitol and the beauty of the Statue of the Republic.

Lifting restrictions stage by stage
11 May 2020 Government approves additional payment benefits to families with children Applications for financial assistance can be filed online.
10 May 2020 Measures to support Russia’s backbone companies approved More support for the hardest-hit industries.
10 May 2020 The Government allocates over 81.1 billion roubles to support small and medium-sized businesses in industries sustaining high losses Companies that keep their employees are eligible for government support.
30 April 2020 Government meeting

The agenda includes the approval of lists of backbone enterprises, additional measures to support small and medium-sized businesses, involving private medical organisations in providing assistance to citizens aged over 65, allocation of funds to support developers and defrauded investors, as well as loans to enterprises that produce goods used to counteract the spread of the coronavirus.
1
Show More