The heads of government of Russia and Slovenia spoke at the ceremony to unveil the monument.

Ceremony to unveil the memorial to fallen Slovenians in Moscow 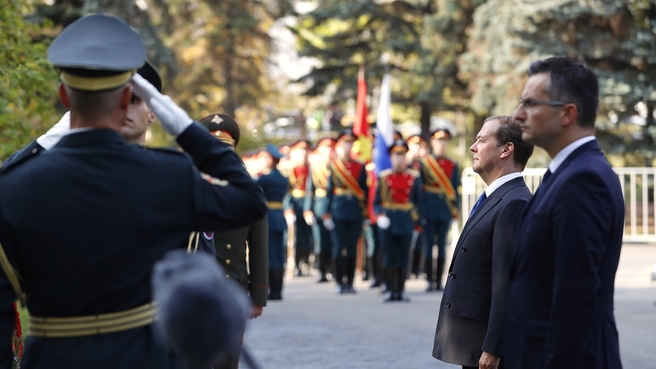 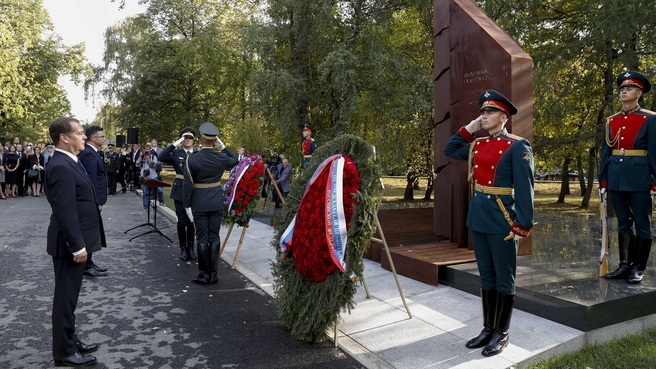 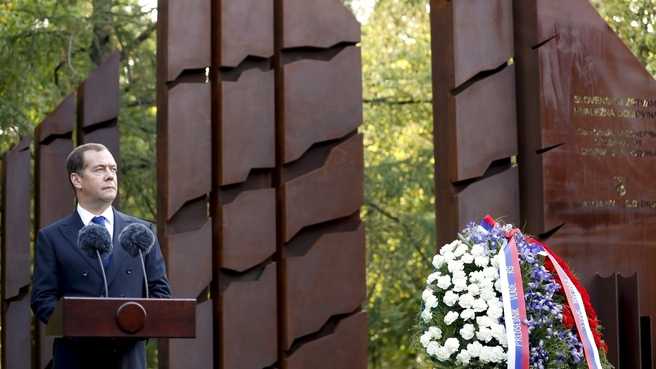 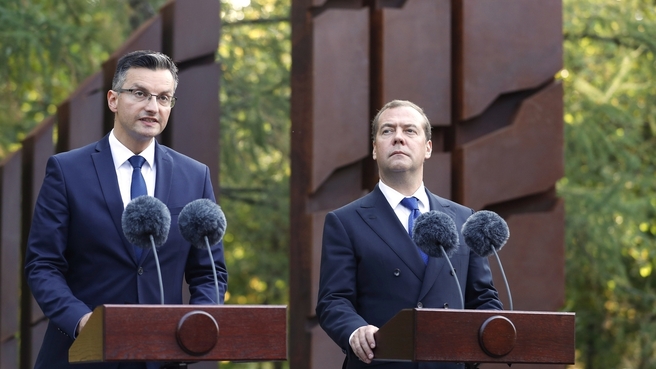 Marjan Sarec (via interpreter): Mr Prime Minister of Russia, ministers and guests, and distinguished architect of the monument, Mr Klanjscek. Allow me to greet all of you today in Moscow, on Poklonnaya Gora.

Today we are at a place where Russians honour the memory of those who gave their lives in the past so that you and I could live in peace and prosperity today.

Today, in this magnificent open-air museum where the stories of people and nations are intertwined, united by their pain, we are unveiling a monument to Slovenians who fell during WWI and WWII.

It is a sign of reconciliation between the different generations and the two European peoples, another step towards expanding mutual trust. I am sincerely grateful to the Russian people, the Government and Moscow for being able today, in the presence of high-ranking officials of both states and all the friends of Slovenia, to unveil this monument and pay tribute to all the fallen Slovenians.

The Slovenians who died in Russia during the first and second world wars, most of them conscripted by the occupying powers against their will, as well as those who voluntarily joined the fight against the Nazis, will be reunited with a piece of their homeland today. With this initiative, we want to clearly tell everyone that we care, and that no one is forgotten, and nothing is forgotten.

The monument’s concept is based on the tallest mountain in Slovenia, Mount Triglav, which has always been our symbol, our conscience, and an integral part of the Slovenian mentality and Slovenian culture.

The monument is shaped like Mount Triglav: three separate elements that are visually similar to each other, and at the same time profoundly different – in character, in interests, and also in philosophy, because we are also different. We are different people.

The sculpture includes a birch tree, which symbolises the aftermath of all the historical turmoil and wars that have left a deep mark and deep pain in every nation, in the families of the fallen whom we commemorate and honour today.

The pain that the people feel can only be relieved through reconciliation, through friendship and friendly symbols. Pain always lingers after major wars, and is always present where people lose their identity. Therefore, we have gathered here today to reflect yet again on the pointlessness of armed conflicts, to deepen and expand friendship between our peoples.

In the past, relations between the Russian and Slovenian peoples developed in the spirit of friendship and affinity for each other. Thanks to this, today, strong cooperation has been established between Slovenia and the Russian Federation based on mutual respect and trust. Our relations rely on mutual understanding of cultural, historical and other factors. We need to foster a sense of shared responsibility, which is the basis for further successful development.

Global challenges in mutual relations require rational thinking and positivism, positive thoughts, from all of us. I would like to quote the great Russian writer Leo Tolstoy, who said thoughts that have important consequences are always simple. I can add that the big steps that life requires of us must be carefully considered. Only strong partnerships and friendships are evidence of maturity in decision-making.

Peaceful development and prosperity require combined efforts. I am sure that good relations between Slovenia and Russia are important in a broader European and international context. In the future, Slovenia and Russia will jointly search for new opportunities to strengthen and expand their friendly relations, respecting each other and working for the benefit of both countries and all their citizens.

Thank you, my friends.

Today is a special day for Russia and Slovenia. We are unveiling a monument to the Slovenians who died on the fronts of Russia during WWI and WWII. Tens of thousands of your compatriots were far from their homeland, participated in the hostilities, and did not return home to their families and friends, everyone who loved them and were waiting for them.

“To the sons and daughters of Slovenia from the grieving Motherland.” This inscription on the monument conveys the feelings that Slovenians have to this day.

The father of the first President of Slovenia, Koloman Kucan, died in battle. Like many other Slovenians, he joined the national liberation brigade, which was formed in our country, and gave his life for peace and freedom in Europe.

Our country, Russia, and Slovenia know the real price of this and have an understanding of the enormous sacrifices, including fathers and grandfathers who did not return from war, orphans, people with disabilities, and destroyed cities, as well as children without a childhood and mothers without children.

Our countries share a common history, and we are grateful to the Slovenians for taking care of the monuments in Slovenia, namely, 84 Russian memorial sites, including a Russian chapel above the Vrsic Pass, where memorial ceremonies are held annually. I fondly remember my participation in this ceremony during a visit to your beautiful country; I told my colleague about this today.

Ten days ago, on 1 September, on the 80th anniversary of the outbreak of World War II, a ceremony to light the Eternal Flame from the flame of the Tomb of the Unknown Soldier here at the Kremlin wall was held at the monument to Russian and Soviet soldiers who died on Slovenian soil during the two world wars. We value the Slovenian people’s contribution to perpetuating the memory of the Soviet army, which, together with the Allies, saved the world and Europe from Nazism.

I am convinced that the monument we are unveiling today will serve as another reminder to everyone living now and, of course, future generations, that any ideology based on hatred ultimately fails.

Such care on behalf of Russia and Slovenia for the history of the 20th century is a foundation on which we are building cooperation in the 21st century, and this monument, which has been rightfully erected here, at the museum and memorial complex on Poklonnaya Hill, will be an important symbol of friendship between our nations.

May we always remember all those who died on the fronts of the two world wars.

The meeting was held via video conference.
1
Show More