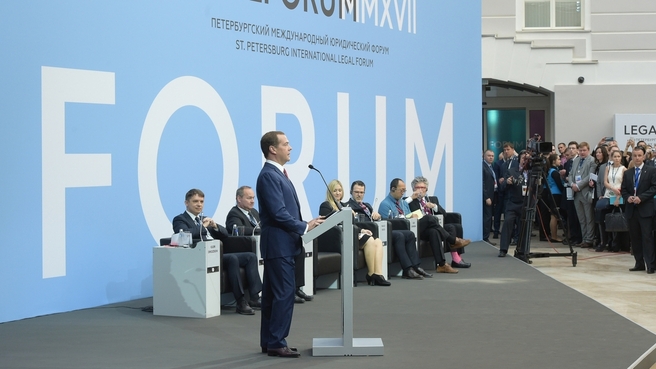 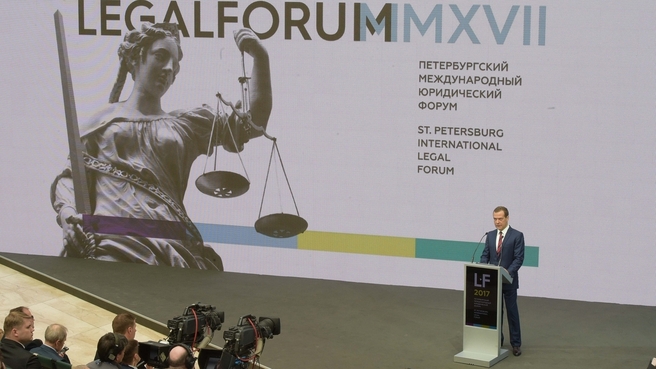 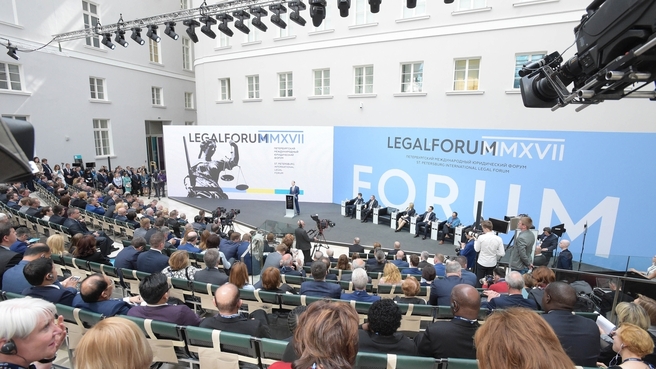 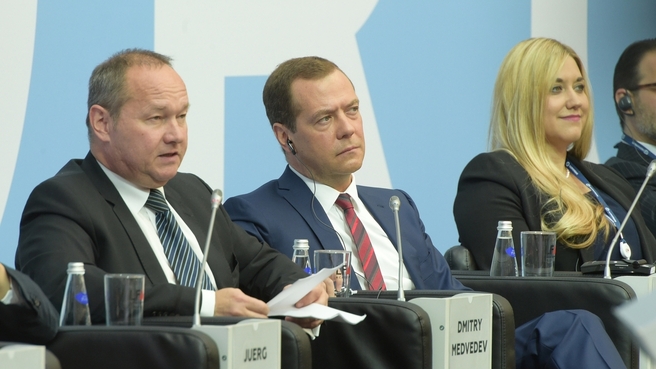 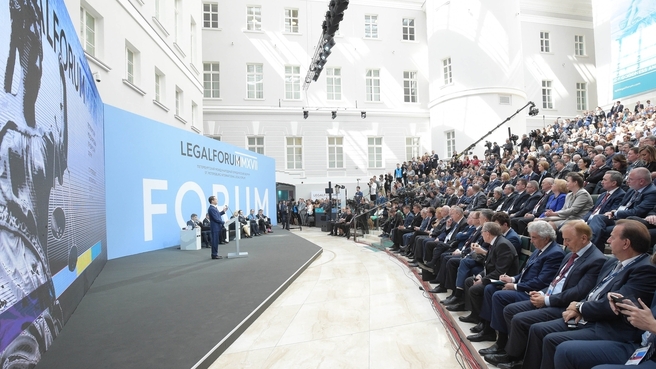 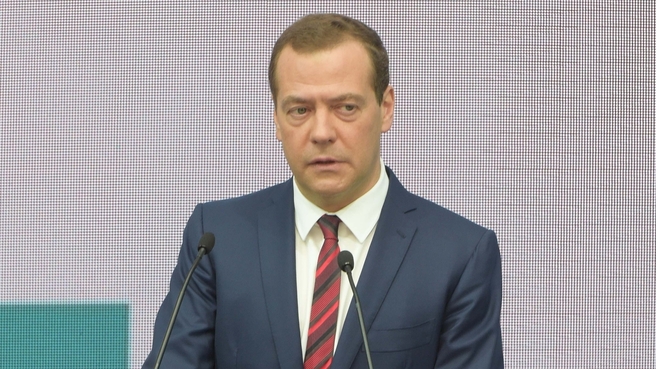 The St Petersburg International Legal Forum was launched in 2011 and is a major platform for dialogue between politicians, lawyers, economists and scientists who represent various economic and legal systems.

The forum seeks to promote ways to modernise the law in the changing global environment, including ways to optimise cooperation between legal systems and work out common approaches to developing new laws in today’s world, to modernise Russian law by using the best foreign practices for drafting and administering laws, and to assist in the development of modern legal sciences and legal education in Russia and throughout the world.

The forum’s agenda this year includes discussions on the regulation of modern technologies and their influence on the legal profession, antimonopoly regulation, financial and investment policies, Russia-Asia cooperation, and the regulation of marketing cultural values. The theme of this plenary session is Law in the Global Context.

Dmitry Medvedev: This forum has met for the seventh time and is the largest venue in the world for different types of lawyers representing different legal systems.

This year, the forum has convened over 3,500 participants from 70 countries.

Like other professionals, lawyers need to determine the place their profession holds in the new global system of coordinates.

On the one hand, we must ensure the supremacy of the law, implement the basic legal principles in practice and maintain public trust in the law and stable legal relations in the economy. On the other hand, the world is not a static organism. New knowledge is accompanied by new challenges, and we need to learn to react to them adequately.

We must learn to interpret the existing legal standards so that the law remains the main method of settling conflicts in our society at all levels. The law is the instrument that can help us balance traditions and modernisation in the globalised world.

This is the age of smart law, which must be flexible yet clearly defined. Legal structures must be compatible with new achievements in research and technology, and people must be reliably protected by the existing legislation.

In this situation, every competent lawyer must not just be a good professional generally but also become a subject matter expert. To be competitive, you must acquire knowledge on related subjects.

The global legal space is changing every day because new legal decisions are made, new laws come into effect and new standards are drafted and adopted. We must take all of this into account, including also because of the ongoing globalisation. This is why the national legal frameworks must simultaneously react to external challenges in two areas.

The first concerns the effect of high technology. The advancement of high technology into the legal sphere has changed the methods for the proliferation of legal material and the system of communication between agencies, clients and courts. We see the rapid proliferation of the so-called distributed database technology or blockchain. We are actually witnessing the formulation of standards for the regulation of the internet, the operation of the law in cloud computing and social media, online trade and the use of unmanned vehicles.

Artificial intelligence is unlikely to replace human lawyers in the near future. We will need balanced, universally recognised and clear rules of behaviour and social interaction even when we create new interaction algorithms. So far, there is no alternative to the law as an instrument of social justice and stability.

The influence of supranational organisations is sometimes described as soft law. A relevant example is the operation of various UN bodies, including the UN Commission on International Trade Law. Over the 50 years since its establishment, the commission has found solutions to current legal issues, such as e-commerce, cloud technology and transnational insolvency.

Hundreds of researchers working at academic centres around the world and self-regulating communities that unite entrepreneurs contribute to modernisation of the global legal infrastructure.

Since global markets have no territorial boundaries, national localisation, or association with a particular regulation, many solutions should actually be more conveniently sought in a soft law format. This also applies to smart society issues.

When we come into direct contact with the so-called blockchain, that is distributed networks, it would be advisable that we at least have an idea of what the basic regulation parameters will look like, and the role of national legislations in this sphere. Even with the understanding that the blockchain per se is an absolutely autonomous system, the value of which lies in the fact that formally nobody can affect it. But things are much more complicated in human society. I just want us to start thinking about legal regulation parameters.

There are many complex issues that cannot be resolved within the framework of national legislation and national practice. However, this does not mean that we should neglect the national legislation provisions. First, we need to conduct an open discussion on all these issues, take into account the risks and challenges that we and our foreign colleagues are faced with, and adopt the best practices. We should not be shy of using international regulation, if we manage to reach proper agreements (creating new conventions in the future).

This approach should also be used in improving regulation in a number of traditional industries, such as subsoil use, environmental protection, energy, and construction, and, of course, in combating new threats, such as cybercrime or the use of the latest technology by terrorists.

Both high tech and the above-mentioned soft law not only create challenges for jurisprudence, but also stimulate the development of traditional law, including also because they allow us to plan the agenda for tomorrow or to determine the things that need to be started right now.

I will name three priority areas which the Russian authorities, including the Government, take into account.

The first is the maintenance of stability of civil law, primarily the right to property as the cornerstone of modern society. The principles of civil law allow the public to feel comfortable and businesspeople to know that their investments are protected by the law.

We must continue to align our legal framework. The Government knows that the Russian economy and business want us not just to formulate adequate rules of behaviour but also to create effective mechanisms for the protection of their interests.

It is believed in some countries that laws are for lawyers. In this sense, we try to steer a middle course, so that even people who have little to do with jurisprudence understand our laws.

Some laws are adjusted in courts. Many cases are taken to the Constitutional Court exactly because a law is misunderstood or misinterpreted.

We have modern codes of law and codified acts for the majority of the types of law, that is, civil law, criminal law, tax law and procedural law. However, we need a cross-systemisation of laws and standards regulating the economy. I am convinced that this will help us improve the quality of legal regulation, especially in the sectors where numerous technical standards are applied. We are working on this within the framework of a reform of the regulatory authorities. The most important thing here is that this systemisation will help us ease the total and overpowering control of our business. As a result, this will make life easier for small and large enterprises, individual sectors in industry and agriculture and the economy as a whole.

And third, we need to enhance public trust in our legal system.

Commercial courts are the most effective method of settling disputes between states and companies. Settling a dispute in a court, either a national or supranational one, is the right way, with the exception of situations when cases are addressed to an international court without the agreement of the defendant state. This is a dangerous tendency that contradicts the essence of international litigation.

We support the development of professional and independent commercial courts in Russia. We have adjusted our legislation in this sphere, but this work is not over yet.

The demand for legal regulation has not decreased in the globalised world. Moreover, the more rapidly the economy and life are changing, the more often people need legal protection.

We must use the best judicial practice and the legal practice in general, learn from each other, certainly respect each other, exchange experience and establish a balance between the national law and international legal regulation.