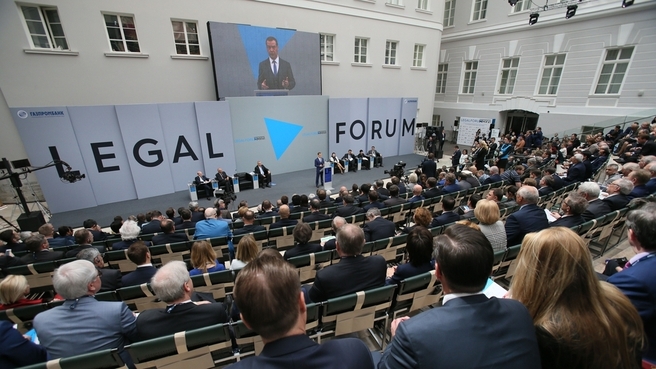 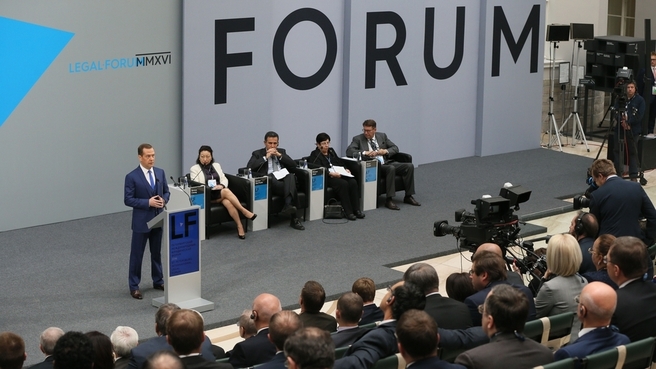 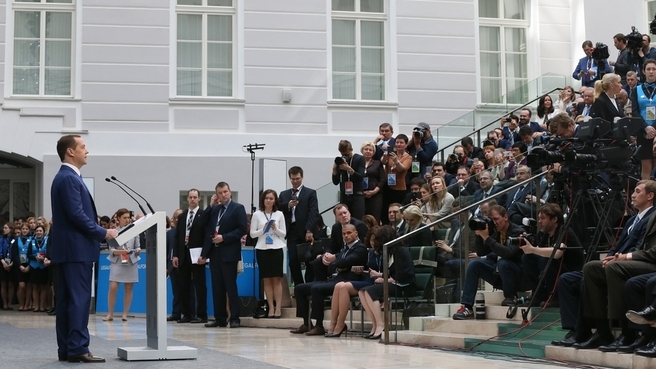 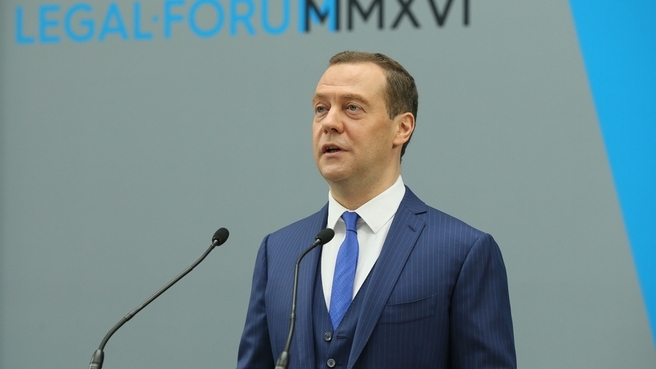 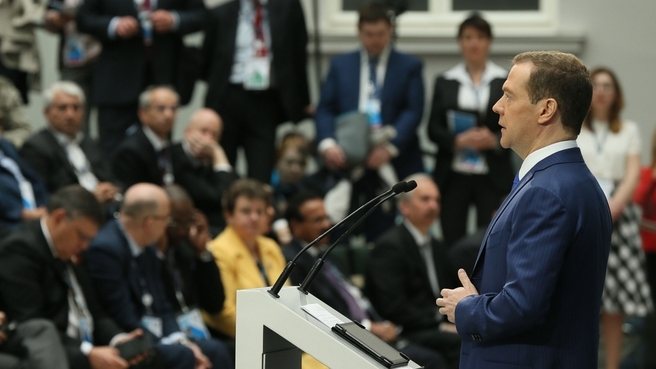 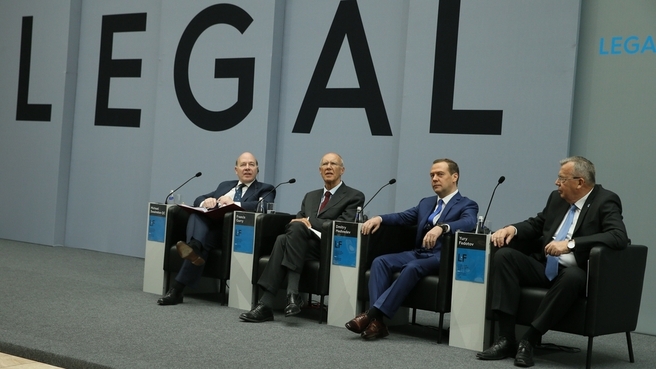 The St Petersburg International Legal Forum was launched in 2011 and is a major platform for dialogue between politicians, lawyers, economists and scientists who represent various economic and legal systems.

The forum seeks to promote ways to modernise the law in the changing global environment, including ways to optimise cooperation between legal systems and work out common approaches to developing new laws in today’s world, to modernise Russian law by using the best foreign practices for drafting and administering laws, and to assist in the development of modern legal sciences and legal education in Russia and throughout the world.

This year the forum will focus on private law, industry and trade, competition protection, judicial and arbitrage practices, smart society, investment and finances, international law and security. The plenary session title is Trust in Law – Mechanism for Global Crisis Resolution.

This year there is a large number of participants: about 3,500 from 80 countries. There is online live-streaming from dozens of countries. This forum is becoming increasingly global in nature due to the quality and professionalism of the discussions. However, the main reason of our forum’s success is, without a doubt, the growing interest in law as a phenomenon.

Our forum also has a special mission: to promote the ideas of change, the modernisation of the law amid global changes, as well as to help lawyers in various countries and various legal systems understand each other better.

Each decision that is taken, each regulatory enactment, each legal position should comply with several key principles.

First, the law should ensure the protection of human rights. On 16 December, it will be 50 years since the UN General Assembly adopted major, fundamental documents: the International Covenant on Civil and Political Rights and the International Covenant on Economic, Social and Cultural Rights. Although these covenants have become part of the universally recognised code of laws, today we are encountering extreme instances of violation. Vast territories effectively end up in the medieval conditions of lawlessness, under the totalitarian rule of fanatics, who defy modern-day law and order. Russia proves with practical deeds that it is committed to protecting the common values of our civilization, but we can only achieve ultimate success in enforcing these covenants if we act together.

Second, it is of the utmost importance that all decisions – economic, social and political – are made only within the legal domain. There is no other way a democratic state based on the rule of law can exist.

Third, it is not possible to imagine law without trust in the law enforcement system. We should learn to apply general regulations and principles in specific situations. The world is developing so rapidly that it is not possible to maintain the accustomed level of particularisation in legislation. The flexibility of legal regulation is ensured not only by the activity of the courts, including arbitration courts, but also by the development of the principle of optionality  in the legal domain.

It is essential to encourage the development of codes of what is known as soft law and apply good-faith practices, including in the corporate and financial spheres and in antimonopoly regulation. Soft law should not necessarily be confined to one country. We can jointly discuss and promote corresponding initiatives at the UN, the Eurasian Union, BRICS, the CIS, and other international organisations.

The fourth principle includes the need to take into account suprastate regulations – naturally, by factoring in state interests as such. The decisions of various international judicial bodies are also very important. These principles should be taken into consideration for trust in the law to become common practice.

There is a demand for private justice proceedings among entrepreneurs. The new legislation was drafted to preserve its priority, including the informal nature of proceedings and the opportunity to resolve a dispute sooner and at a lower cost.

Today we are witnessing drastic changes in investment arbitration prompted by the need to have trust in arbitration proceedings. When an investor comes to work in a foreign legal environment, he/she can expect to receive special protection that would not, however, undermine constitutional norms of the country; otherwise, it would annihilate the ideological and legal base of arbitration and both sides’ trust in its decisions. The state as a participant in the process, above all, upholds the interests of the national economy and peoples’ welfare rather than its commercial interests.

This is not the only problem facing the arbitration of international disputes. In 2014, the UN Commission on International Trade Law drafted the UN Convention on Transparency in Treaty-based Investor-State Arbitration. On the one hand, the document specifies the rules for disclosing information about investor-state arbitration proceedings and thus increases trust in arbitration as a whole. On the other hand, if this instrument is manipulated, all the accumulated authority is destroyed. And this is what happens when applicants make recovery claims against their state through international arbitration using “the corporate veil” of a foreign legal entity.

The adaptability of legal regulation is also ensured by the development of the principles of permissibility and optionality in law, as well as by the maximum possible relegation of regulation to the level of contract between the concerned parties. The use of optional legal constructions today is relevant not only in purely private relations but also in relations with the participation of the state. This is obvious and makes it possible to enhance the effectiveness of economic support measures, especially in a situation where the economy is under the impact of a crisis or under external pressure. Both are factors in our country today.

Even more active efforts should be taken in fighting transborder abuses, since they seriously erode trust in law. One such problem is double tax evasion, where individual companies take advantage of loopholes in intergovernmental agreements, expatriate their profits from the country where they engage in actual economic activity, but as a result, their income is not taxed anywhere. States can only overcome this trend through joint efforts.

We are observing the growing role of unilateral restrictions that some states use for political purposes. Such practice has essentially become a method of arbitrary interference in the affairs of other states. So-called unilateral sanctions are becoming indiscriminate both in their substance and in terms of the scope of persons that they target. There are attempts to make these sanctions exterritorial and ensure their application in any part of the world contrary to all agreements and, of course, to international law.

Our state, our companies and our citizens have been exposed to such pressure for almost two years now.

How our partners in the international community will overcome this situation, which they have created themselves, remains an open question. It is always easier to break than to observe [the law]. However, this always incurs responsibility, not only legal responsibility but in the end also historical responsibility.

Any violation of the legal balance only deepens mutual misunderstanding and breeds mistrust, prevents the establishment of dialogue, and impedes the resolution of crises on any level, from local to global.

We live in a digital era, where it is sometimes very difficult or even not possible to identify the counterparty in legal relations, which leads to the problem of trust in the legal form. This calls for special competence in using legal tools. They should measure up to the rapid changes in communication technology.

The conflict between copyright owners and users continues to deepen. A solid practical basis in this legal domain has been developed in the world.

Considering that in most countries the principle of freedom and equal access to information and knowledge is firmly integrated into national law, this creates in effect an unlimited field for disputes and conflicts. The lack of a balance of interests of copyright holders and users is becoming an impediment to the free exchange of scientific information, hinders the development of high-tech businesses and encourages people to systematically go around the law. So there is a pressing need to look for a balance between new technological conditions and the traditional values of intellectual property rights. In this case, the state should act as an arbiter to determine whose rights are subject to protection to promote economic growth and social development.

There is another virtual-space area that should also become a subject of special attention on the part of legal experts – e-commerce and e-transactions. Often, this is where law reaches its limit. Property transfer and certification deals are made and carried out in an automatic mode.

This situation requires us to take vigorous creative efforts. This is a real challenge for legal experts – searching for new effective solutions that can serve as a foundation for the evolution of what is essentially a new field of law.