Meeting of the Council of SCO Heads of Government

The discussion dealt with the deepening of trade and economic and humanitarian cooperation among SCO countries, as well as progress in the implementation of the Programme of Multilateral Trade and Economic Cooperation of the SCO States and the List of Measures to Promote Project Activities within the SCO in the period from 2012 to 2016.

Restricted attendance meeting of the SCO Council of Heads of State 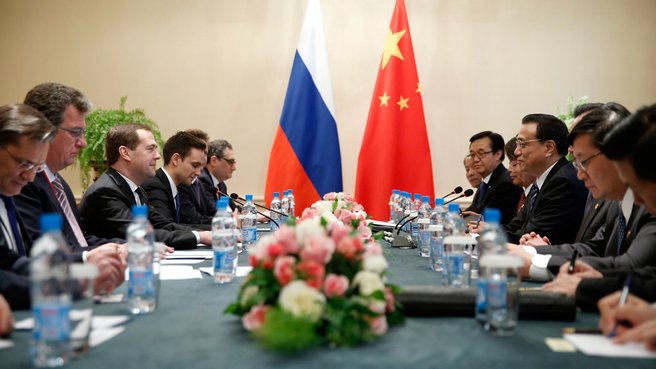 Dmitry Medvedev meets with Premier of the People's Republic of China Li Keqiang before Meeting of the Council of SCO Heads of Government. 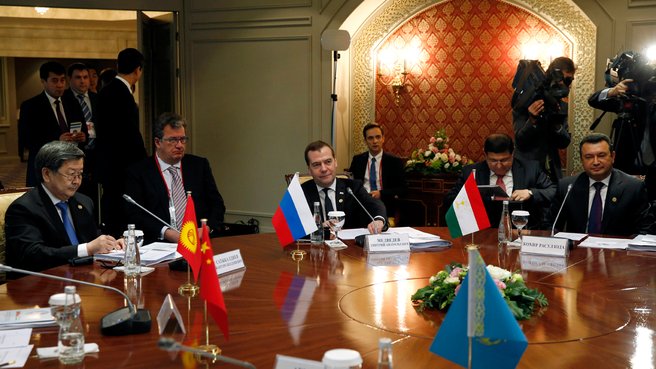 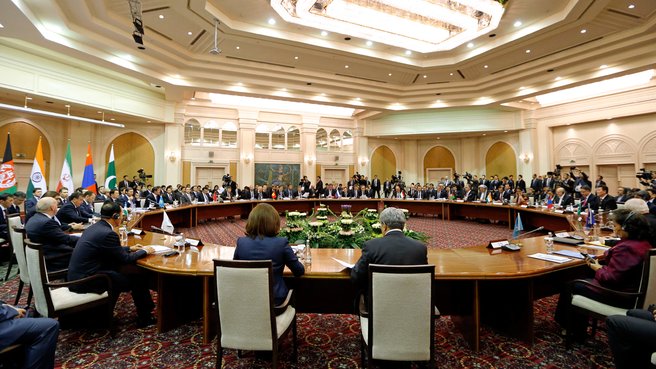 Expanded meeting of the SCO Council of Heads of Government, Heads of the Delegations of SCO Observer States and Honoured Guests 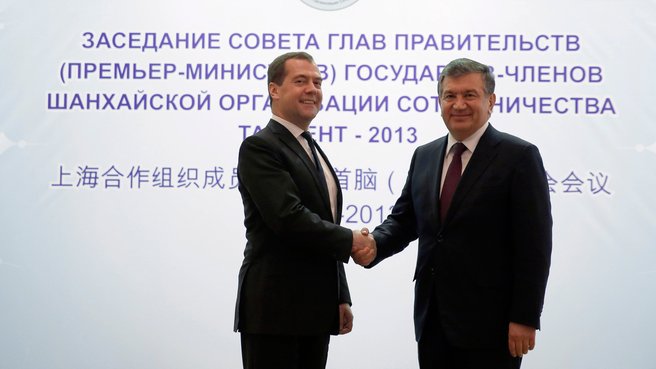 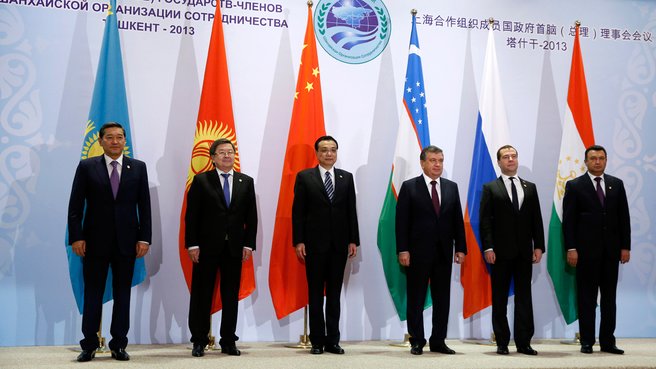 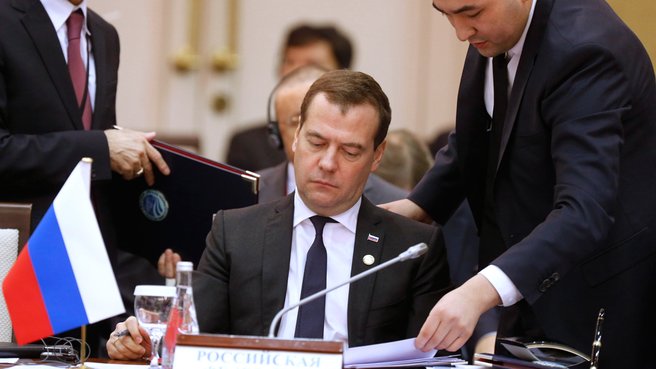 The Shanghai Cooperation Organisation Council of Heads of Government has met in a restricted format.

Еxpanded Meeting of the SCO Council of Heads of Government

Expanded meeting of the SCO Council of Heads of Government, Heads of the Delegations of SCO Observer States and Honoured Guests

Dmitry Medvedev: Mr. Chairman, members of the Council, meeting participants. The SCO has been working for 10 years and has achieved some success, becoming a real factor in regional politics and indeed, global politics. During the course of our consultations we take into account all ongoing global processes, and keep a close eye on the world, which is of course developing and changing. We observe the emergence of new centres of economic growth and the formation of centres of political influence. The efforts of all those who work at this organisation, those who work as part of the SCO, are aimed at making our world calmer and safer. In this context I agree that there are problems, which our Chinese partners traditionally call the problems of three evils. We should bend our efforts to addressing these problems together.

Dmitry Medvedev: "We seek, through joint diplomatic efforts, to diminish the threat of military interference in Syria. The initiative put forward by Russia on bringing Syrian chemical weapons under international control was stated in the final declaration of the Bishkek summit of the Shanghai Cooperation Organisation in September."

Speaking about the current international situation, of course, it remains very complicated in the regional context. At the same time there have been certain achievements. I have to note the recent decisions taken in Geneva during the consultations of the Six on issues connected with the Iranian nuclear programme. That, without any doubt, is movement in the right direction.

We seek, through joint diplomatic efforts, to diminish the threat of military interference in Syria. The initiative put forward by Russia on bringing Syrian chemical weapons under international control was stated in the final declaration of the Bishkek summit of the Shanghai Cooperation Organisation in September, and today we are exerting vigorous political and diplomatic efforts toward coping with this problem.

Traditionally, restoring stability in Afghanistan has been high on the agenda of the Shanghai Cooperation Organisation. We are concerned about the existing threats to the country and of course to the space of the Shanghai Cooperation Organisation. We will of course contribute to national reconciliation in Afghanistan to ensure security in that state, and to revive our neighbour’s economy and social sphere.

Dmitry Medvedev: "We will of course contribute to national reconciliation in Afghanistan to ensure security in that state, and to revive our neighbour’s economy and social sphere."

The priority of the Shanghai Cooperation Organisation is economic interaction. The Shanghai Organisation is developing projects, has agreed on substantial measures in such areas as trade, investments, technological exchanges, agriculture, science and environmental protection. It is important to pursue all these activities consistently. We are passing decisions, and they must be put into practice.

We have just been discussing various projects at our restricted meeting. Incidentally, it is important that our observers and dialogue partners become involved in this work. We are talking, among other things, about the development of transport arteries. The agreement on creating favourable conditions for international haulage by road opens up fresh opportunities. Hopefully this will be finalised soon, and will become a working document. We also believe that it is important for the development of the Shanghai Cooperation Organisation that various financial institutions should start working. Consultations on establishing a development bank and a special account are underway. Russia will take a most active part in these consultations and, of course, in the decision making.

Another promising area of cooperation is the launching of the Shanghai Cooperation Organisation Energy Club. This could provide a forum for dialogue on energy saving and for the preparation of new projects. We are ready, before this year is out, to sign a memorandum on its creation and to begin work, and of course we invite all the countries that are still wavering or have not made up their minds as to their place in this process to join this initiative.

Educational cooperation is undoubtedly an important area. The Network University of the Shanghai Cooperation Organisation is an ongoing pilot project. It brings together almost 70 universities. We are preparing an agreement that will lay down the terms of its activities. Various events, including international conferences and forums of university rectors, are being held. I hope that in this way we will contribute to the development of the educational potential of the Shanghai Cooperation Organisation.

We also expect considerable returns on the scientific-technical cooperation agreement. Both the creation of research centres involving SCO countries and the use of existing research can infuse new momentum into this work. We have the Russian-Kyrgyz and Russian-Tajik international research centres. Of course we are ready to establish similar centres with other partners.

Dmitry Medvedev: "Another promising area of cooperation is the launching of the Shanghai Cooperation Organisation Energy Club. This could provide a forum for dialogue on energy saving and for the preparation of new projects."

The Russian-Chinese initiative on creating a system of personal mobile satellite communications appears to be promising. It is a serious initiative that calls for sizable investments, almost $1 billion in fact, but the Shanghai Cooperation Organisation has yet to discuss it in a hands-on manner. However, I would like to note that this area of activity has immense potential, this is indeed what our partners would like us to do so that our activities lead to concrete projects and not just conversations within a circle of dignitaries, and there is no lack of such conversations.

Тhe Shanghai Cooperation Organisation Council of Heads of Government posed for group photos before the meeting. 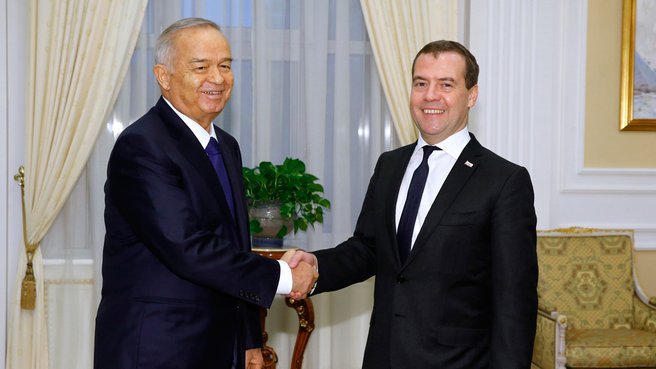 Transcript of the beginning of the meeting:

Islam Karimov: Mr Medvedev, let me welcome you to Tashkent and express my deep respect. I would also like to use this occasion to express my deep personal respect for President Vladimir Putin and the Russian people. I am glad to see you in Tashkent, but I know that, first of all, you are here for the forum of the Shanghai Cooperation Organisation, which will bring together the heads of Governments of member countries. Still, I think that this forum and other similar events are a good opportunity to meet and exchange our views on important issues of our bilateral agenda. It is also an opportunity to discuss relations impacting the international situation. These relations acquire new importance every day. We can discuss this separately.

In my opinion, the international situation is changing rapidly, which is especially true about our region, and it is giving rise to new situations that we cannot allow ourselves to overlook in our practical work. In this respect, my personal view is that Russia has been and will be our partner and ally. This status has been sealed in our documents and treaties. Uzbekistan will work on the basis of such documents to open up new horizons and will ensure that their provisions are fulfilled. I would like to welcome you to Tashkent once again. I would now gladly listen to what you have to say.

Dmitry Medvedev: Mr Karimov, I am myself very glad to be here in Tashkent. Even though this is, as you have said, an international event, it is a good occasion to meet each other and to exchange views on the strategic partnership of Russia and Uzbekistan. We are, in fact, close partners and friendly nations, and our complex and ever-changing world makes it crucial to coordinate our stances on the issues of the international agenda and, of course, bilateral and economic cooperation. This meeting presents us with exactly such opportunity. Mr Putin sends you his greeting and best wishes.