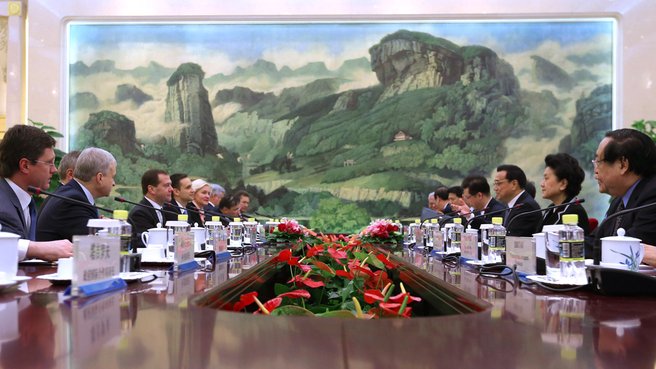 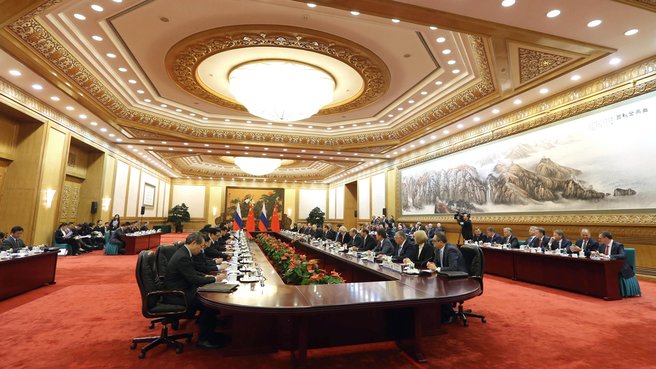 Prior to the meeting, Prime Minister Dmitry Medvedev and Premier of the State Council of the People's Republic of China Li Keqiang held talks.

The Prime Ministers of Russia and China meet as part of the 18th regular meeting between the heads of the Russian and Chinese governments.

Following the 18th regular meeting between the heads of the Russian and Chinese governments, the parties signed a number of documents

Prime Minister Dmitry Medvedev and Premier Li Keqiang have signed a Joint Communique on the results of the 18th regular meeting between the heads of the Russian and Chinese governments.

Dmitry Medvedev and Li Keqiang also presided over the signing of the following documents:

– Minutes of the 14th meeting of the Russian-Chinese Commission on Cultural Cooperation;

– Minutes of the 17th meeting of the Russian-Chinese Commission for Preparing Regular Meetings between Prime Ministers;

– Memorandum of Understanding on Reducing the Roaming Rates for International Telecommunication Services between the Russian Federation and the People’s Republic of China;

– Memorandum of Cooperation in Disaster Medicine between the Ministry of Healthcare of the Russian Federation and the PRC National Health and Family Planning Commission;

– Protocol between the Federal Customs Service of Russia and the PRC General Administration of Customs on Mutual Recognition of the Results of Customs Control of Certain Goods;

– Memorandum of Understanding between the Federal Customs Service of Russia and the PRC General Administration of Customs on Preventing Customs Violations in Air Transport;

– Joint Statement of the Federal Agency for Tourism of Russia and the PRC National Tourism Administration on the Results of the Year of Russian Tourism in China in 2012 and the Year of Chinese Tourism in Russia in 2013;

– Basic Terms of the Agreement on the Purchase and Sale of Liquefied Natural Gas between Yamal LNG and PetroChina International;

– Loan Agreement between the State Corporation Bank for Development and Foreign Economic Affairs (Vnesheconombank) and the China Development Bank (to extend an $800 million loan to fund the construction of a multifunctional complex on the territory of the Slava open-end joint stock company in Moscow);

– Loan Agreement between the State Corporation Bank for Development and Foreign Economic Affairs (Vnesheconombank) and the China Development Bank (to extend a $400 million loan to fund the construction of the third unit of the Ekibastuz GRES-2 Power Station in Kazakhstan);

– Contract on Design, Acquisitions, and Construction of the Ozerny Ore-dressing and Processing Enterprise in the Republic of Buryatia;

– Framework Agreement between the State Corporation Bank for Development and Foreign Economic Affairs (Vnesheconombank) and the Export-Import Bank of China (to open a credit line for $700 million).

– Contract to Build a Cement Plant with a Production Capacity of Three Tonnes Per Day;

– Basic Principles of the Schedule to Launch the Oil Refinery in Tianjin and the Crude Oil Supply for Processing at the Refinery;

Dmitry Medvedev: Ladies and gentlemen of the media. The 18th meeting between the heads of the Russian and Chinese governments is over. I’d like to say that our talks with Chinese Premier Mr Li Keqiang were very fruitful and concerned. 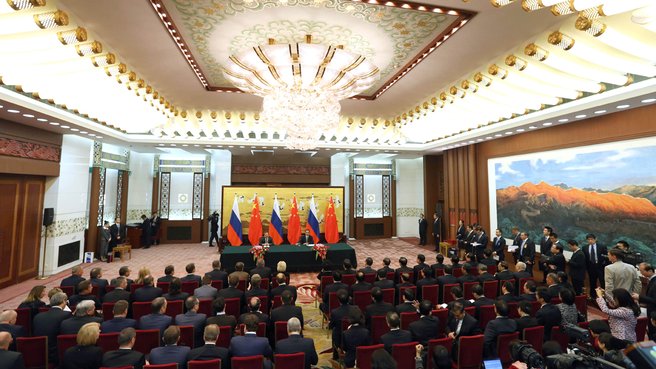 I didn’t want to repeat myself, especially since we quoted from Lao Tzu during our meeting with Mr Li Keqiang, in particular his words that silence is a source of great strength. But I will say a few words nevertheless.

We have confirmed that relations between our countries are special relations of a strategic partnership. What is the evidence of this? In fact, the very signing ceremony which you have witnessed and which we are all so positive about. It is likely that Premier Li Keqiang and I understand better than others (as we both have a legal background) how important it was to sign these documents and then to monitor their implementation. The global economic situation is complicated, and we both acknowledged that our bilateral trade had slumped at the beginning of this year. But we managed to reverse this trend, and our trade has bounced back. This means that our relations have a great potential, that we are up to the task of increasing bilateral trade if we make the effort and involve not only our governments, but also the commercial sector in this work.

What did we discuss? I believe that we can increase bilateral trade to $100 billion and even to $200 billion, even in these extremely complicated global economic conditions.

Another important issue, apart from volume, is the quality of cooperation. Today we discussed various issues which are traditionally discussed at regular meetings of the heads of government, including cooperation in technology intensive projects and joint innovations. I have invited my Chinese colleague to attend the Open Innovations forum, which we will incorporate in our regular meeting. I hope that it will be interesting for him and that we will do this next year.

Li Keqiang (via interpreter): I have accepted the invitation with gratitude.

Dmitry Medvedev: Yes, and so I hope that we will give a new meaning to our cooperation. Mr Li Keqiang rightly said that we have tried and tested several forms of cooperation, but we should also make use of new mechanisms because we have to deal with new economic challenges. We should also focus on investment, because not everything is simple and straightforward in this sphere. It is true that we need to build up investment, both Chinese investment in the Russian economy and Russian investment in China. In this regard, we proposed strengthening investment cooperation, primarily direct investment in each other’s economies.

Of course, there are flagship industries such as energy, and it is logical that today we discussed oil and gas cooperation. I hope that the documents we have signed today will be implemented and the arrangements which we are considering, in particular gas arrangements, will soon take the form of formal documents.

There are other important industries besides energy, such as civil aircraft manufacturing, nuclear generation (we discussed this today), electricity exchange (the creation of generating facilities in our countries), and a positive outlook in agriculture and the light industry. All these issues should be and will be in the focus of our attention.

I remember how we held the Year of Russia in China in 2007 and next the Year of China in Russia, and after that, the Years of Russian and Chinese Languages. We are now holding the Years of Russian and Chinese Tourism and are planning a no less important international project, the Years of Youth Exchanges. In short, our cultural cooperation is becoming increasingly multifaceted. The range of our cultural relations with China is larger than with any other country. As for youth exchanges, this project is a spearhead into the future.

I am sure that these events will come off very well. But we should promote contacts in education as well. It is for this reason that I will be meeting with students tomorrow. I think it is also very important for us to have a better understanding of how our education systems develop. Tomorrow I will travel to the birthplace of my respected counterpart.

Li Keqiang (via interpreter): Thank you for visiting my native land. I would very much like to go there too, for it calls to me in my heart, but nevertheless I will be unable to accompany you, as I am scheduled to meet with the Indian Prime Minister here tomorrow, as I have explained.

I have an idea, however. When meeting our students tomorrow, please tell them about our joint efforts to fight the floods last summer. Please tell them about the difficulties that our governments and our peoples faced in their joint fight against the floods. Please tell our students that in this difficult situation it was owing to the help of our Russian colleagues and people and the help of two Russian hydropower stations in the upper reaches of the Amur that we managed to prevent a great deal of trouble for the Chinese part of the Amur river basin. Please tell them about this. We believe this is the true embodiment of our friendship and our fraternity. Our young people should know as much before it becomes history.

Dmitry Medvedev: I will make a point of speaking about it when I am in your native Anhui Province. I will be meeting with students and I will tell them how we cooperated over this. If you have no objections, I will even tell them in brief about our telephone conversations in that period and the joint action on the part of our rescue and safety services. I really do think that this is an example of our strategic partnership and a fine example of the friendship between our two countries.

Dmitry Medvedev: As we bring our joint news conference to a close, which is joint even in spirit, I would like to express my sincere gratitude to my counterpart Mr Li Keqiang, to all our Chinese comrades and, naturally, to the Russian delegation for their joint productive work. I am sure that this work will strengthen our strategic partnership and that we will continue to work in the same vein. Thank you very much indeed! (Says “thank you” in Chinese.)

Li Keqiang (via interpreter): Thank you!

The meeting was held via videoconference.
1
Show More