Agenda: the main results of 2022 in the fuel-and-energy sector, support for families in the Primorye Territory, creation of a digital eco-system for the Northern Sea Route and construction of the Bukhta Sever (North Bay) port in the Yenisey River Estuary.

The Government continues to support the regions. 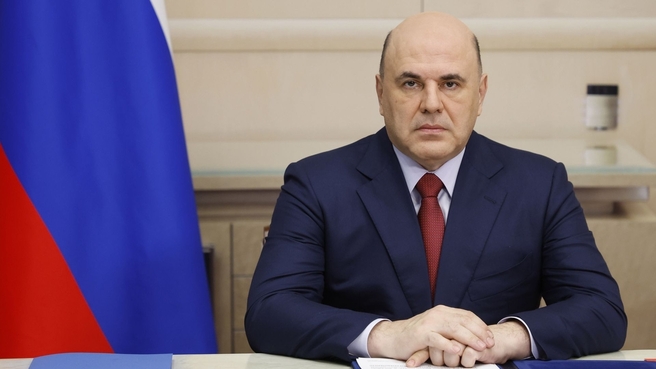 The National Programme for the Socio-Economic Development of the Far East, adopted under the President’s Executive Order, has been carried out for over two years now. The goal is to improve the living standards in the regions of this macro territory. The President emphasised the need to implement all of its provisions in full while providing the necessary financial and organizational resources for this purpose.

Today, the Government has made a decision to increase state support for families in the Primorye Territory where a third or subsequent child is born. This support will start this year and run through the end of 2025. Now this lump sum payment will more than double (from 450,000 roubles) to 1 million roubles. This money can be spent on a full or complete repayment of a mortgage loan. We will allocate over 450 million roubles to the Primorye Territory for this purpose.

The loan programmes for improving a housing situation by buying a flat in a new residential building or to build a new house, have earned a good reputation. Many people, including residents in the Far East, have used them. This support was helpful to families with many children.

It is important for them to receive this financial support immediately. Mr Trutnev, I would like to ask you to monitor this personally.

The Government will continue the comprehensive development of the Northern Sea Route (NSR), an important transport corridor that runs completely along Russian shores. The President emphasised that this would allow Russia to more fully realise its export potential and to develop more efficient logistics routes, including to Southeast Asia. This is important for strengthening national sovereignty and security.

Following the President’s instruction, the Government made additional decisions to ensure year-round navigation in the Arctic.

The Government has endorsed the rules for granting subsidies to create a digital ecosystem for the Northern Sea Route. The federal budget for this and next year provides almost 4 billion roubles for this purpose. The system will consist of a uniform platform of electronic services to be rendered to participants in the logistics market. It will include ship-based automated measuring systems and aircraft-based equipment for monitoring the ice situation. This will make it possible to collect more information on weather conditions, monitor the ice situation in real time and enhance navigation safety on the NSR, which is vital for the timely delivery of cargoes to northern destinations and for export shipping.

The Government has approved the parameters of budget support for the construction of the Port of Bukhta Sever in the Yenisey River estuary. We will allocate over 3.5 billion roubles to dredge the harbourage area within the next two years. Part of the funding will be used to create navigation safety systems. This will make it possible to use ice-class sea vessels carrying a useful load of over 120,000 tonnes.

We hope that these measures will promote economic activity in the Arctic, improve transport accessibility and the availability of necessary products for the local people, and that it will generally expedite development in the region.

Now let’s turn to the next issue. The Government has updated the general layout of electricity generating facilities for the long-term, which is especially important for the sustainable growth of the economy and public wellbeing. The main strategic goal is to ensure the reliable operation of Russia’s power grid while steadily reducing its impact on the environment. With this in mind, we will be developing efficient, low-carbon power generating facilities.

The adopted document provides for putting into service new units at nuclear power plants starting this year, with an aggregate capacity of over 12,000 megawatts, and the construction of additional hydroelectric facilities for another 7,000 megawatts. It is also important to replace obsolete equipment at current power plants of all types with modern high-tech units and lay new power transmission lines. All these measures will fully meet the energy needs of our industrial sector and of the public.

Mr Novak, please tell us about the main results of the power industry and of other branches of the Russian fuel-and-energy sector in 2022.

Despite sanctions restrictions, external challenges and actions by unfriendly countries, in 2022 the Russian fuel -and -energy sector ensured reliable sustainable work onand stable supplies of the required energy resources supplying to both industrial customers and the populationhouseholds with the required energy resources. Moreover, a growth of indicators was recorded in the electric power industry and the oil and coal branches.

During the entire year 2022, the country’s regions were steadily supplied with energy. Priority was given to the restoringation of the energy infrastructure in the new regions of the Russian Federation. Our specialists have restored about 3,500 power grid facilities, 4 powerenergy units at the Lugansk thermal power station, as well as 163 kilometres of mains and 1,365 kilometres of gas distribution pipeline networks.

In 2022, the aggregate capacity of electric power stations in Russia amounted to 253.5 GW while the share of low-carbon energy sources increased to 34.2 percent. Some 1,.600 megawatts of new capacities were put into operation, including over more than a quarter of renewable energy sources built under the Clean Energy initiative of socio-economic development. These are 10 facilities in ten regions of the Russian Federation.

In the past year, electricity generation went up by 0.7 percent. I would like to note that its generation by renewable energy sources – sun and wind – increased by 38 percent.

The growth of eElectricity consumption went up by 1.5 percent. The main growth took place in oil pumping and production,. rRailway shipments and the aluminium industry.

During the past year, 423,000 new consumers were connected to electricity. This number includes about 390,000 households and 30,000 small and medium-sized businesses. Some 34,000 kilometres of electric power lines were put into service.

At present, we are focusing on the operation during the autumn and winter season. No mass disruptions were recorded during days off and holidays.

There are some disconnected consumers in the Republic of Dagestan who have no electricity due to difficult weather conditions. Power engineers are now working to restore energy supplies to consumers. This issue is under special control of the Government.

The oil industry also achieved positive results in the past year. Despite actions by unfriendly countries and sanctions restrictions, oil production amounted to 535 million tonnes in 2022, which is 10 million tonnes more than in 2021. This is a 2 percent increase. Oil exports also grew by 7 percent. I would like to note that the budget revenues from the oil -and -gas sector went up by 28 percent, or by 2.5 trillion roubles.

The production of motor petroleum increased by 4.3 percent and that of diesel fuel by 6 percent.

The modernisation of oil refineries and implementation of key petrochemical projects were continued. Mr Mishustin, iIn line with your instruction on price control, Mr Mishustin, we continuously monitored emerging risks and took measures to remove them. In 2022, the growth of retail prices was much below lower than the level of inflation – prices for petroleum prices increased by a mere 0.7 percent and on diesel fuel went up by 10 percent. We will continue doing this in 2023 as well.

The exports of pipeline gas were reduced due to sanctions restrictions and sabotage attacks subversive acts on Nord Stream -1 and Nord Stream-2 gas pipelines. That said, the production of LNG was increased and its exports grew by 8 percent to reach 46 billion cubic metres a year.

The Sila Sibiri (Power of Siberia) pipeline increased its gas supplies to the People’s Republic of China. They reached a record 15.5 billion cubic metres.

A very important task was the expansion of the social gas infrastructure in line with the President’s instruction. Thus, gas was brought to the borders of households at no charge and 504,000 households were supplied connected to with the gas network, which is 2.5 times more than in the past. The general nationwide share of localities connected to the gas network level of gas supplies amounted to 73 percent by the end of the past year.

The coal industry also did well despite the embargo on supplies to Europe, which was introduced in August. Domestic coal companies increased gas production by 0.3 percent over the past year. They produced 442 million tonnes of coal, which is actually a record level equal to that in 2020. It is important to remember that although exports dropped slightly, by no more than 7.6 percent, supplies to the domestic market went up by 6.8 percent. They fully met the requirements of energy facilities and housing and utility structures, as well as the citizens of our country.

Mr Mishustin, summing up the results for 2022to sum up, I would like to note again that despite all the difficulties, the fuel -and -energy sector demonstrated stable operation, resilience to external challenges and an ability to ensure the energy safety security of our country and the use of its export potential, in part, for creating a big part of the budget of the Russian Federation.

The fuel -and -energy sector remains one of the key industries in the Russian economy. Of course, it is important to understand how energy branches respond to current challenges and to plan the further development of the sector proceeding from this premise.