Agenda: Expanding the list of therapeutic food for children with disabilities, purchasing Oncaspar, extending the Far Eastern Mortgage programme, implementing a programme for building a network of world-class university campuses, ratifying the treaty with Belarus required for the introduction of an integrated system for administering indirect taxes, and automatically informing citizens about pension accounts in non-government funds. 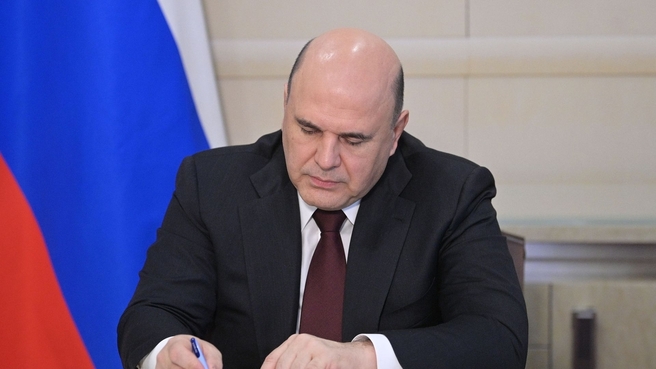 Excerpts from the transcript

Mikhail Mishustin: Good afternoon, colleagues. Before discussing the agenda, I would like to say a few words about the adopted decisions.

During the opening of social facilities last week, the President emphasised that healthcare is a priority area. We are paying special attention to critically ill children. They are entitled to free clinical nutrition on a prescription. The Government has extended its list for the next year. There already will be 103 items on this list starting 1 January. All these specialised products are needed for the growth, development and treatment of young patients with very complicated diagnoses. I would like to ask you to make sure all regions provide children with this nutrition efficiently. It is an important part of their therapy.

The Government will also pay for the purchase of Oncaspar. This is an expensive medication for treating children with acute leukaemia. It does not yet have domestic equivalents. We will allocate over 122.5 million roubles for its purchase. At least 1,000 packs of Oncaspar will be purchased with government support this year. I would like to ask the Healthcare Ministry to oversee the transfer of these supplies to medical facilities.

A few words about yet another decision.

The Government has extended the Far Eastern mortgage until the end of 2030. The President gave this instruction during his speech at the Eastern Economic Forum plenary session. He emphasised that this programme is efficient and in high demand. It has been in effect for three years, during which applicants received over 55,000 loans for the purchase of housing at a discounted rate of 2 percent.

Furthermore, we expanded this programme in summer. Earlier, it was accessible only to young families and participants in the Far Eastern Hectare and regional labour mobility programmes. Now it is open to medical workers and teachers regardless of their age and family status if they have worked for at least five years in their profession in any region of the federal district. The budget for the next three years has allocated about 70 billion roubles for this programme, including 20 billion roubles for next year.

The Government is implementing a wide range of measures to create comfortable living conditions in the Far East. The provision of high-quality housing, of course, is the most important thing for people. The programme provides this opportunity, without limiting choice. Mortgages make it possible to build or buy homes or flats in new residential buildings.

Let us discuss another issue.

As per the President’s instruction, we have been implementing a programme to build a nationwide network of world-class university campuses since last year.

The President discussed this idea with university students on Russian Students Day. It was noted that such campuses should become a convenient residential area and a place for studies. Undergraduate and postgraduate students living there will be able to work and study at laboratories under the guidance of professors, implement creative concepts, hold discussions, and have a good time.

In all, 27 applications were submitted during the 2021 contest, and the jury selected eight of them.

Mockups of these campuses were unveiled during working trips to Tomsk, Kaliningrad, Nizhny Novgorod and Yekaterinburg. We are now implementing these projects, plus four more in Chelyabinsk, Moscow, Novosibirsk and Ufa.

We held another contest earlier this year and selected nine of the nearly 40 applications.

Minister of Science and Higher Education Valery Falkov will report on the programme’s results and implementation in greater detail. Go ahead, Mr Falkov, you have the floor.

President of Russia Vladimir Putin set the task to create 25 campuses by 2030 using the mechanism of public-private partnership. In 2021, we selected first-stage projects, and then, as you indicated, Mr Mishustin, eight projects were chosen for implementation out of 27 applications submitted.

On 17 February, the selection for the second stage of campuses was announced and continued until 1 August. As a result, 39 applications from 34 regions were submitted for consideration. Let me remind you that the first selection involved 27 applications from 25 regions. The total cost of all projects submitted to the second stage of selection is 933 billion roubles. At the same time, the volume of private investment is almost 45 percent, or 416 billion roubles. The share of private investment in the applications increased by 11 percent compared to the previous selection.

Every application for project selection was signed directly by the governor of the region. At the same time, co-financing from the regional budget was a prerequisite. As a result, the total amount of regional co-financing amounted to 51 billion roubles for all projects of the second selection.

Applications were selected according to the requirements of Governmental Resolution No. 1268, and in addition to the criteria specified there, the participation of universities in the largest national programme, Priority 2030, was also considered, as well as the plans to create a technology park in the application; the relationship of the campus with territories that have a special legal status, such as special economic zones; the impact of the campus on the quality of the urban environment; a unique concept of architectural and urban planning solutions, and much more.

Each project underwent four expert reviews: a sector-specific review by our ministry, a construction one by the Ministry of Construction, and legal, financial and economic ones by VEB.RF. That is, all projects have undergone a comprehensive review for a wide range of different parameters.

The issue of financing new projects until 2030 was worked out separately with the Russian Ministry of Finance.

Considering the President’s instructions that projects to create campuses should be based on the mechanism of public-private partnership, nine projects with the highest results were selected out of 39 applications. These are projects in the Sirius federal territory, as well as in the cities of Samara, Perm, Yuzhno-Sakhalinsk, Ivanovo, Arkhangelsk, Tyumen, Khabarovsk and Veliky Novgorod. All nine projects will be implemented in the format of public-private partnership.

Preparation of the project documentation for some is already underway, and it will be done for the rest immediately once the relevant decision is adopted.

There are plans to create more than 37,000 new places for students and teachers to live in, more than 130 research laboratories and over 1 million square meters of new comfortable space for education, research, accommodation, leisure and sports.

In the near future, a new federal project on the creation of campuses, which we are developing together with the Government administration, will be approved, and the development of the corresponding information and analytical supervision board is nearing completion.

At the end of my speech, I would like to stress that creating campuses is one of the most important projects for developing Russia’s scientific and technological potential as a whole, attracting talented youth to the regions and, in a broad sense, ensuring technological sovereignty.

In this regard, I would like to express special gratitude to you, Mr Mishustin, for your comprehensive support of this important project.

Mikhail Mishustin: Mr Falkov, it is important to involve businesses in building campuses – you said they are interested in these projects. I talked to business people practically at all the universities we visited. After all, they are points of growth not only for a specific university and the city where it is located, but also for the entire region.

I would like to remind you that the President instructed us to establish a network of 25 world-class campuses by 2030. There is a lot of work ahead. I would like to ask you to monitor each stage of the construction schedule because you are personally responsible for this project, Mr Falkov.

Now let’s turn to the agenda.

The Russian Federation and the Republic of Belarus continue bringing their economic systems closer with a view to further developing the Union State.

Today, we will discuss the ratification of the treaty required for the introduction of general principles of administering indirect taxes. These are customs and excise duties and some other fees. A supra-national tax committee will be set up to coordinate positions in this area. It will set minimal tax duties and lists of exemptions, and, hence, benefits. As a result, both countries will have common terms on their entire territory. This will lead to the formation of an integrated system for administering indirect taxes. Owing to this, we will be able to create a common information space for expanding cooperation and mutual assistance in countering the evasion of fiscal payments, including during cross-border trade.

In general, ratification of the treaty will remove many barriers and ease the terms for launching new projects and attracting investment to the economies of Russia and Belarus.

We will also review amendments to legislation that concerns citizens who accumulate their pensions in non-government funds. Today, they have to make an in-person visit to an office of their fund in order to get information about their accounts – how much they have in their accounts and when they can receive pension payments. Owing to the amendments, people who keep part of their pensions in non-government pension funds will receive such information automatically, in the same way as the pensioners insured in the Pension Fund of Russia. This is much more convenient. They will not have to spend time visiting the offices of their funds.