The Deputy Prime Minister spoke at a plenary session of the 18th Russia-Kazakhstan Interregional Cooperation Forum in Orenburg. 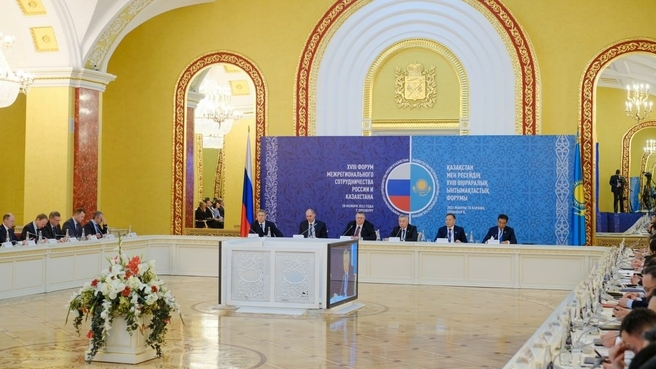 The Russia-Kazakhstan Interregional Cooperation Forum is held annually to maintain and expand economic, cultural and humanitarian ties between the two countries. Lifting Infrastructural Limitations on International Trade is the theme for 2022. The delegations of Russia and Kazakhstan were led by Deputy Prime Minister of the Russian Federation Alexei Overchuk and Deputy Prime Minister, Minister of Trade and Integration of the Republic of Kazakhstan Serik Zhumangarin, respectively.

I would like to once again welcome the participants of the 18th Russia-Kazakhstan Interregional Cooperation Forum and start by expressing my gratitude to the hosts and the host city of Orenburg for the warm welcome. 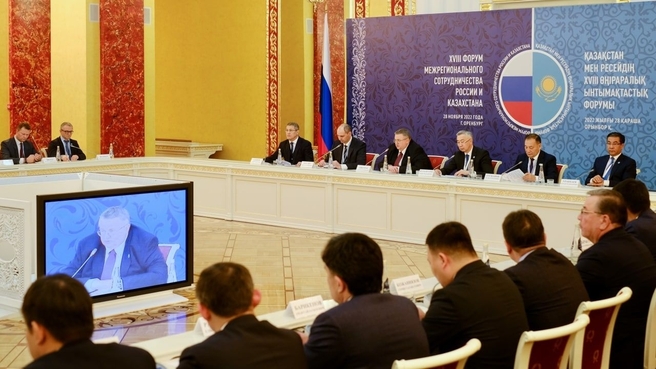 In the current situation, it is hard to overestimate the importance of the forum’s theme - Lifting Infrastructural Limitations on International Trade - which was outlined by our respective presidents.

The heads of 11 Russian regions and representatives of the business and expert community have come to Orenburg. As you are aware, business events were held in the first half of the day. Based on the interregional aspect, the participants discussed matters of transport infrastructure development and integration, tools to support economic cooperation in the context of the project, including small- and medium-sized businesses, reviewed matters of digital transformation and the intellectual urban environment, and looked into youth policy which is a critically important aspect for forming friendly relations in the future.

Also today, in the run-up to the plenary session, Deputy Prime Minister and Minister of Trade and Integration of the Republic of Kazakhstan Serik Zhumangarin and I convened a meeting with the co-chairs of the Intergovernmental Commission for Cooperation between the Russian Federation and the Republic of Kazakhstan. We discussed specific steps to promote cooperation in transport and the financial and banking sectors.

In cooperation with our Kazakh colleagues, we make regular efforts to improve the contractual framework underlying our cooperation. A major package of interregional and commercial documents designed to promote interregional and trade and economic ties between our countries will be signed on the sidelines of the forum today.

Amid the new realities, promoting interregional cooperation and deepening integration ties are critically important and help open broad opportunities for stepping up contacts in the areas which, until recently, were off-limits to companies from our countries due to Western competitors’ dominance.

In turn, we call on all our partners to step up and get involved in the import substitution efforts that are ongoing in the Russian Federation. We see excellent prospects in terms of creating new cooperation ties and logistics projects, and for introducing the latest information technology.

This year, we managed to maintain last year’s dynamics in bilateral cargo transport unchanged at 51.5 million tonnes for the first 10 months of 2022.

This is a good example of cooperation in areas of mutual interest. Our Kazakhstani partners were granted exclusive tariff terms. We welcome Kazakhstan’s participation in the Eurasian Agroexpress project.

Expanding road freight volumes is an important area of ​​cooperation. The volume of bilateral traffic is estimated at 4-5 million tonnes per year. Road transport is most important for small- and medium-sized businesses, as well as for regions that are far from a railway line.

I believe that the signing of a new agreement on international road transport, which is being worked on by our respective transport agencies, will boost this work significantly.

Lifting limitations on existing routes is of key importance if we want to expand road transport. Primarily, this concerns building more checkpoints and expanding the transport infrastructure and supply chain capacity.

Last year, a joint action plan to improve roadside checkpoints across the Russian-Kazakh state border was signed. It is planned to upgrade 30 of the 50 existing checkpoints on the Russia-Kazakhstan state border. This year, design and survey, and construction work began at ten checkpoints, including major checkpoints such as Sagarchin and Mashtakovo.

Interregional interconnectivity is being effectively addressed as part of the work to form the Greater Eurasian Partnership. This concept was put forward by President Vladimir Putin in 2015 and provides for harmonising integration processes throughout continental, Greater Eurasia.

Of course, this interaction will be impossible unless the approaches practiced by the states or their associations in trade, transport, logistics, infrastructure construction, and energy are standardised, which, in turn, will help lift the restrictions that we are discussing today.

In line with the Development Strategy for Eurasian Economic Integration up to 2025, the European Economic Union is seen as one of the centres for shaping Greater Eurasian Partnership. I would like to note the high effectiveness of the joint efforts by Russia and Kazakhstan at the EAEU.  As the EAEU digital transport corridor ecosystem is shaped, we have reached a new level, which is developing international transport routes as a single customer-friendly logistics service. As you know, one such example is the container service offered by the UTLC [the United Transport Logistics Company].

The project to upgrade the section of the Samara-Orenburg highway, which is about 100 kilometres long, is nearing completion and it has already become a contributing factor in boosting export and creating new competitive products.

Passenger services, in particular flights, are important for neighbouring countries. In the first nine months of 2022, passenger traffic has topped 350,000.

Since last April, we have been working to allow railway and road passenger transport services to resume. So far, four railway passenger routes have been launched. Also, since June 2022, some long-distance trains and through trailers assembled in Russia and going in transit through the Republic of Kazakhstan stop at the Petropavlovsk Station to allow passengers to board and get off.

The Iletsk 1 railway check point is up and running in the Orenburg Region. This railway station accounts for as much as 10 percent of the country’s eastbound container shipments, including, those passing in transit, whereas its potential allows it to increase its capacity threefold.

Cooperation with Kazakhstan, including the implementation of joint projects with that country, is gaining momentum in aviation, and the chemical, pharmaceutical and other industries.

The assembly facilities for trucks have been put into operation and ambulances and other vehicles are being delivered.

Dear colleagues, I believe the agreements reached at the forum will help us achieve an essentially new level of cooperation between our countries on the entire spectrum of issues highlighted in our dialogue, including at the regional level.