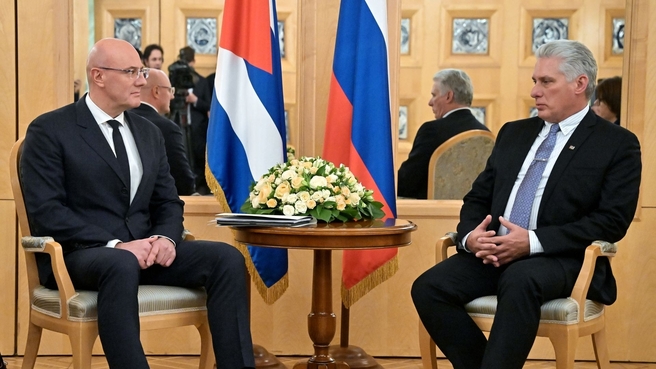 President of the Republic of Cuba Miguel Díaz-Canel Bermúdez met with Russian Deputy Prime Minister Dmitry Chernyshenko, who is also co-chair of the Intergovernmental Russian-Cuban Commission on Cooperation in Trade, Economy, Science and Technology. The meeting took place ahead of a meeting between the Cuban leader and President of Russia Vladimir Putin.

The two officials discussed key issues of cooperation in trade, the economy, lending and finance, and between sectors of the economy.

“During all those hard moments, we always felt the support of the Russian Federation, in particular, of President Putin,” Miguel Díaz-Canel Bermúdez said. “Once, when the pandemic was at its peak level, a major accident occurred at a plant producing medical oxygen. Russia sent us a plane with oxygen tanks and also sent us two extra oxygen producing units. We used the plane to fly across the Latin American region twice a day to deliver oxygen. I am saying this to you as a person who is fully acquainted with this matter: had we not received support from the Russian Federation we would have ended up in a much more precarious situation. Thanks to Russia’s support, no one died in our country because of a shortage of oxygen.”

Dmitry Chernyshenko replied by thanking the Cuban President for his decision to visit Russia in these complicated geopolitical times.

“I am very thankful to you for your assessment of the current situation and your kind words,” Dmitry Chernyshenko said. “I want to assure you that we regard Cuba as our key ally and reliable partner in the Latin American region, and our relations with Cuba do not depend on short-term considerations and have strategic nature. I want to avail myself of this opportunity and thank you for the efforts of your colleague Ricardo Cabrisas, with whom we chair the Russia-Cuban Intergovernmental Commission. Ahead of your visit, we, especially for the purpose, had held meetings of 14 working groups and made significant progress in implementing our roadmaps. Guided by the priority project list approved by the two parties, we discussed progress on the projects in industry, energy, transport and digitalisation.”

In conclusion, Dmitry Chernyshenko said that the outcomes of this Intergovernmental Commission meeting formulated in the final act would contribute to stepping up and expanding sectoral cooperation between Russia and Cuba.

In turn, Miguel Díaz-Canel Bermúdez added that Russia and Cuba would continue improving their bilateral economic ties, moving forward and strengthening their relations.

Dmitry Chernyshenko was appointed co-chair of the Russian-Cuban Intergovernmental Commission by a resolution of Russian Prime Minister Mikhail Mishustin in August, 2022.