The meeting was held on the sidelines of the 2nd Caspian Economic Forum. 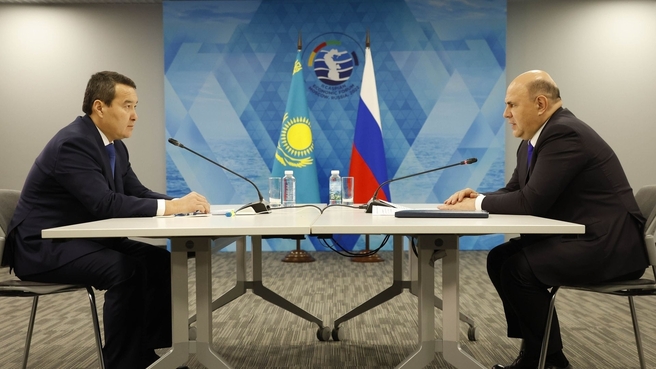 Mikhail Mishustin: Mr Smailov, I am happy to welcome you in Moscow within the framework of the 2nd Caspian Economic Forum. I would like to use this occasion to convey best regards to President of Kazakhstan Kassym-Jomart Tokayev on behalf of President of the Russian Federation Vladimir Putin and from me personally.

The reason for this dynamic pattern of our contacts at the government level is our sincere interest in strengthening friendship, partnership and allied relations with fraternal Kazakhstan. We prioritise the implementation of the important decisions that were adopted by the presidents of Russia and Kazakhstan during their talks in Sochi, Russia, on 19 August.

They have to do primarily with building up trade and economic cooperation. From January to August this year, our mutual trade increased by nearly 9 percent to $17.5 billion. If this trend persists, we will reach a new historic high by the end of the year. We have recently noted its record-high level, but it will grow even more.

With the impressive industrial potentials of Russia and Kazakhstan, we have good prospects for the implementation of joint programmes to manufacture priority industrial products that are in demand in our markets. We propose to launch more strategic projects in the energy sector, in mechanical engineering, transport infrastructure, the peaceful use of nuclear energy, and the digital economy. There are a lot of options. We place great emphasis on transport cooperation, including the International North–South Transport Corridor project. This new route should facilitate the supply of raw materials, components and finished products, strengthen connectivity between our countries and with neighbours in the region and, of course, should further promote trade. We also need to ensure that our trade and economic cooperation is reliably protected from the influence of illegitimate economic sanctions imposed by unfriendly states.

Our intergovernmental commission on economic cooperation and trade and its Russian co-chair Alexei Overchuk are keeping all these issues under review.

Russia and Kazakhstan are also successfully cooperating in education, science and culture. Under the February 24 intergovernmental agreement, higher education institutions are opening branches in each other’s countries, and scientific and academic exchanges are expanding.

This year, we have planned a series of events to mark the 30th anniversary of the establishment of diplomatic relations between Russia and Kazakhstan, including the Days of Kazakh Culture in Russia.

We also closely cooperate in regional formats such as the Eurasian Economic Union, the Commonwealth of Independent States, the Shanghai Cooperation Organisation and the Caspian Five.

I am confident that our vigorous joint efforts will further enhance the role of these multilateral associations, including in the global economy.

Esteemed Mr Smailov, I am ready to discuss all issues on our bilateral agenda with you today. Now I give the floor to you.

Alikhan Smailov: Mr Mishustin, I am happy to welcome you again on the sidelines of the second Caspian Economic Forum.

Relations between our countries are progressing in full accordance with the spirit and principles enshrined in the Treaty of Neighbourliness and Alliance in the 21st century.

As you rightly noted, the 30th anniversary of the establishment of diplomatic relations between our countries is only a week away. Over the past three decades, our countries have fostered a stable and trusting constructive dialogue, and achieved a high level of interaction.

The ongoing political dialogue between our leaders is critically important. It is gratifying that our meetings are also regular and constructive.

The Russian Federation is Kazakhstan’s top trade and economic partner. As you said, last year, we achieved record indicators in bilateral trade, which grew almost by a third. We are seeing this positive trend continue this year. I am confident that we will be able to continue building up trade. We have all the tools required, which we must actively use and promote.

Mr Mishustin, the government of Kazakhstan reaffirms its readiness to further build up cooperation across the board of our bilateral relations.