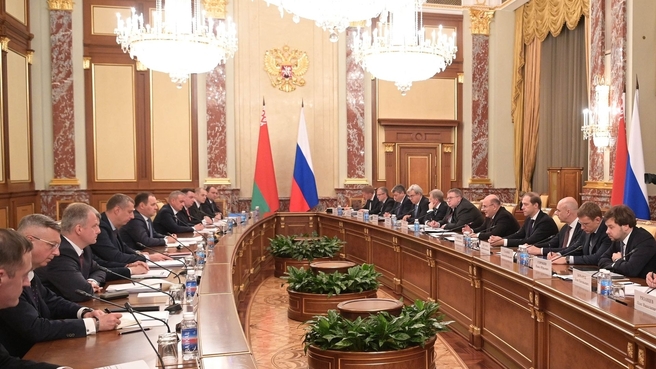 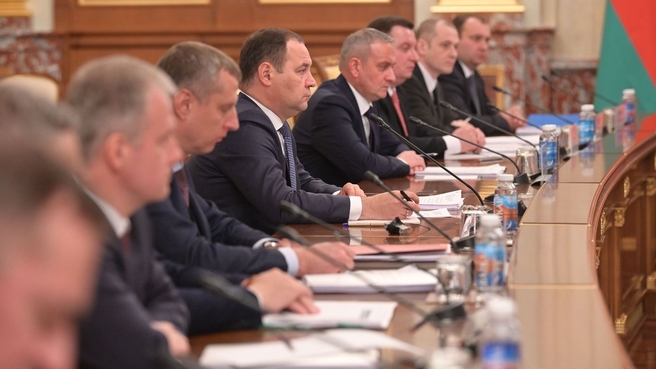 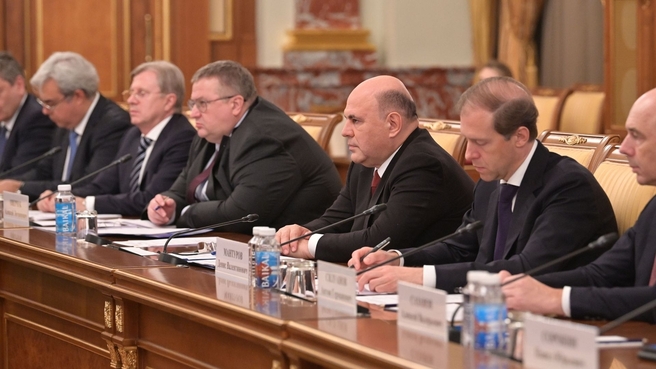 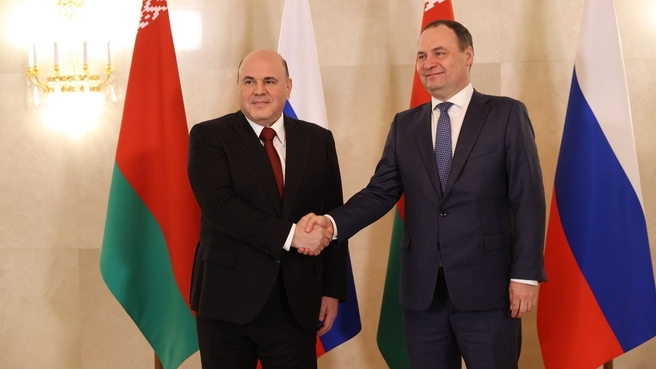 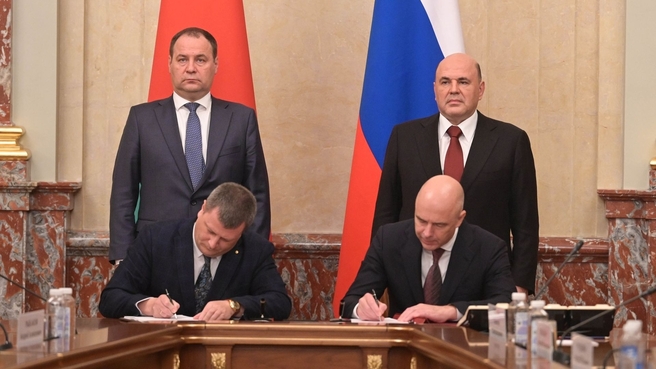 Documents signed after the talks

We are happy to welcome you to the Government House of the Russian Federation. Before we start discussing Russian-Belarusian cooperation, I would like to mention the momentous decision made by President of the Russian Federation Vladimir Putin last week. There was a historical ceremony for the signing of treaties on the accession to Russia of the Donetsk and Lugansk people’s republics and the Zaporozhye and Kherson regions. This decision was a result of the choice made by the people in these areas, millions of people.

President Vladimir Putin emphasised specifically that this was their inalienable right as fixed in the UN Charter. They made a choice – to be with their own people and their homeland. It is important to do everything necessary for their security and early return to normal life. Much serious work on restoring infrastructure, the economy and the social sphere is lying ahead. Now they are part of our country.

Mr Golovchenko, your visit to Moscow is taking place as an extension of the September 26 Sochi talks between President of Russia Vladimir Putin and President of Belarus Alexander Lukashenko. The task of our governments is to ensure the implementation of the top-level decisions on further development of bilateral relations in all major areas.

Using this opportunity, I would like to ask you to convey my best regards and wishes to President of Belarus Alexander Lukashenko from Vladimir Putin and from me personally.

The Government is focusing particularly on strengthening friendly, partner-like and allied relations with fraternal Belarus. I am convinced that promoting integration within the Union State will provide an effective response to new challenges stemming from the sanctions pressure put on us by unfriendly states that can be compared to an all-out economic war.

Given these circumstances, we are taking coordinated steps to protect Russia and Belarus’ economic security and technological sovereignty. We are expediting the implementation of 28 union programmes that were approved by the presidents at the Supreme State Council meeting in November 2021. The ministries and departments of the Russian Federation and Belarus are systematically working towards this. To date, more than half of the planned 989 activities have been completed.

Despite the difficult external economic situation and the global economic crisis, Russian-Belarusian trade is growing steadily. Last year, it reached a record high of $38.5 billion and increased by 5 percent to $22 billion in January-July 2022 compared to the same period last year.

Belarusian exports to Russia are growing fast, up by a quarter to over $10 billion compared to the same period last year.

We are successfully implementing joint strategic economic projects. On September 29, in Moscow, the ministers of transport of Russia and Belarus signed an intergovernmental agreement on Belarusian cargo transit through Russia. This will increase Russia’s transport volumes and open up new opportunities for Belarusian exports to reach international markets amid the trade restrictions imposed by the EU and other unfriendly states.

It is important to spur the launch of new initiatives. We will pay special attention to industrial cooperation and import substitution projects.

Another important document, an agreement on common principles of taxation with regard to indirect taxes will be signed at the end of the talks (we discussed this today, Mr Golovchenko).

This is a big step towards deeper integration in the Union State. We will continue to build new interaction mechanisms in the customs and tax spheres and create a level working field for our businesses and a common economic space in the interests of the people of the Russian Federation and Belarus.

I suggest that we discuss the ways to expand trade and economic cooperation set by the presidents of Russia and Belarus. The floor is yours, Mr Golovchenko.

Roman Golovchenko: Thank you. Mr Mishustin, colleagues, members of the governments of the two countries.

I am excited to have this meeting which is an opportunity for us to once again discuss our relations in a constructive and friendly manner.

The intensity of ongoing contacts at all levels confirms our mutual interest in maintaining the necessary dynamics, stepping up bilateral relations, and quickly developing coordinated approaches to counter the unbridled external pressure.

During our meetings, we have repeatedly made it clear that joint efforts are the way forward for us if we want to withstand the insane sanctions designed to destroy our countries.

As we see, these are not just words.

Not only are we resisting, but we are successfully expanding mutual trade under these complicated conditions; we are strengthening manufacturing cooperation and creating new transport and logistic chains.

Indeed, mutual trade volumes (in dollars) have increased by over 12 percent from January through August over the same period last year. If this trend continues, I believe that our 2022 trade volumes will hit an all-time high of about $45 billion or more.

Certainly, these results show that we have chosen the correct strategy for substituting foreign manufacturers’ items with our goods, over companies that have stopped exporting to our countries.

Collaboration in joint production facilities makes it possible to eliminate dependence on foreign-made items, equipment and components. This also creates jobs and a reliable and solid foundation for further innovation development in our countries. We have already accomplished a lot in this respect, but a lot remains to be done.

I recently went to the republics of Bashkortostan and Tatarstan in the Russian Federation where I had a good opportunity to see the results of this policy.

We are expanding joint production of farming equipment, transport systems and other special-purpose equipment. For example, an important investment project, a new harvest-processing machinery plant, has been launched in Bashkortostan.

Co-production arrangements between automotive plants are another outstanding example of cooperation. Today, Belarusian auto components manufacturers and KAMAZ PLC are creating a comprehensive and solid co-production arrangement. They have set up a clear interaction system, and they are also implementing programmes to make automotive components, units, systems and microelectronics.

Mr Mishustin, I would like to add that intergovernmental agreements were signed last week on recognising technical operations carried out within the Union State and on cooperation in developing microelectronic technology, designing and manufacturing the electronic components base and electronic engineering as part of carrying out the union programme for drafting a single industrial policy.

That is, we are moving forward quite quickly, creating the necessary legal framework and developing the necessary algorithms for the successful and practical implementation of these projects. The most important goal here is, no doubt, to strengthen the Union State’s technological sovereignty in particularly sensitive areas and to form a level, competitive environment for Belarusian and Russian companies.

Scientific and technical cooperation is moving forward. A draft intergovernmental agreement on implementing integration import-substitution projects is now ready for signing. Just last Friday, our respective finance ministers agreed in full on the text of this document. We look forward to it passing domestic procedures very quickly.

Mr Mishustin, you mentioned the transport and logistics aspect of our cooperation. Indeed, we have accomplished much during the period under review. In fact, we have put together new supply routes for Belarusian products using the Russian ports in the Northwestern District, the Black Sea, the Sea of ​​Azov, China-bound overland routes using the North-South corridor, as well as Caspian Sea ports. This was a major effort. Back in February 2021, we signed an intergovernmental agreement on the transshipment of Belarusian cargo through Russian seaports. The success of this interaction and the established routes made it possible to sign, just a few days ago, a new intergovernmental agreement on transporting certain types of goods via these transport corridors. This is a system-wide document that lays out the volumes of cargo shipments to all destinations and sets out the tariffs for these services which Belarusian shippers and forwarders can be guided by in their work.

I would also like to note that in January through August we shipped 105 percent of the cargo under the previously signed agreement by rail. That is to say that it is working quite well. I am confident that the flow of goods through Russian territory and Russian logistics centres will increase going forward.

We have stabilised the transport situation and jointly reoriented Belarusian export flows and maybe more, for which we are grateful to our colleagues for their constructive work.

Allied programmes are being implemented successfully. I will not spend too much time on them, since we often discuss them.

You mentioned a seminal document on the general principles of levying indirect taxes which we are about to sign today and which probably also shows that we and our negotiating teams are working quite effectively.

Amid the ongoing and unprecedented political and economic pressure, our integration efforts have passed a test of strength and have proven their effectiveness and readiness to withstand any challenges or threats that may come our way.

Last week, as you noted, the presidents reviewed bilateral priorities. Specific instructions have been issued. It is up to us to ensure their unconditional practical implementation, so, we thank you for the opportunity to discuss in detail, here and now, the crucial ongoing interaction issues in order to make the necessary decisions at the government level of the two countries.

The below document was signed following the talks: