On 19 September, a Russian-Armenian business dialogue was held in Yerevan within the framework of the Russian-Armenian Interregional Forum. Its main event was the plenary session, Eurasian Partnership: New Economic Growth Points. 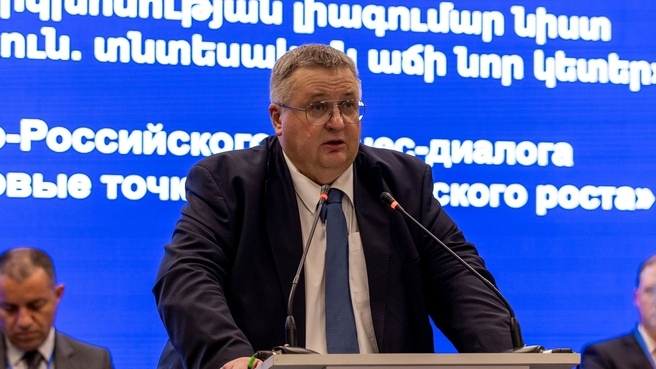 I would like to again express our sincere condolences over the clashes that took place on the border between the Republic of Armenia and the Republic of Azerbaijan on 13-14 September. We understand your anguish and share it with you.

We understand how difficult it was to organise this event in the current conditions, and we are especially grateful to you for not postponing or cancelling it. This is evidence of your appreciation of ties between our business communities and our countries.

This dialogue has become a traditional event, indicating the level of our economic relations and provides an impetus to the development of new joint projects.

I would like to note that a project to build a strategic development centre has been launched since the previous business mission a year ago, during which we discussed that initiative. It is being supervised by our countries’ economic ministries, and today we will talk about it again.

Our meeting today is a wonderful opportunity for business leaders not only to communicate with each other, but also to direct their questions to the representatives of Russian and Armenian executive authorities attending our event.

Due to its location, Armenia has always been a crossroads of trade and economic routes in Eurasia. Our nations have always been connected by a common history, cultural ties, mutual assistance and support in times of trouble.

This year we will mark the 30th anniversary of diplomatic relations between the Russian Federation and the Republic of Armenia. Our contractual framework includes over 200 treaties in various areas, but our communication is not limited to bilateral ties.

The Republic of Armenia is an important strategic partner within the framework of the Eurasian Economic Union, whose main objective is to ensure the stable development of trade and economic ties based on four freedoms: the free movement of goods, services, capital and workforce.

At the same time, the foreign policy and foreign economic events of 2022 have had a major impact on the current state of affairs. Apart from challenges, new opportunities for development, including intra-EAEU development, have emerged.

In the current complicated conditions, we are able to keep the main macroeconomic indicators at the level of previous years and to boost them considerably. At the end of the first quarter of 2022, the total EAEU GDP increased by 3.6 percent in physical terms. Preliminary national GDP growth statistics for the first six months highlight much more positive results than those predicted by various international financial institutions.

For these purposes, we have set up a high-level working group with the Eurasian Economic Commission. Its members will create favourable conditions for enhancing the domestic resilience of EAEU member states’ economies, including efforts to ensure macroeconomic stability.

A directive of the Commission’s Council approved a list of measures to enhance the resilience of EAEU member states’ economies, including efforts to ensure macroeconomic stability. The implementation of this list makes it possible to overhaul supply chains, support domestic demand, formulate capital flight prevention measures and maintain the stability of national currencies.

According to analysts’ estimates, the full implementation of the list of measures will provide a cumulative economic effect that we will see in the total GDP of the EAEU member states with an increase of up to 2.5 percent, or $49 billion.

It is especially important to ensure support for the development of cooperation within the EAEU.

In this context, the heads of the Eurasian "five" governments discussed the need to identify sources and mechanisms to finance integration projects, which includes considering new sources of funding from the union’s budget. This was discussed at the meeting of the Intergovernmental Council in Cholpon-Ata in late August 2022. So far, this is not covered under the current obligations of the EAEU treaty, but in the near future we will determine a number of industrial cooperation pilot projects to test new support mechanisms for these kinds of projects.

The development of transactions in national currencies using an independent payment infrastructure is another important subject that the prime ministers discussed at the meeting. As is obvious today, an independent payment infrastructure is becoming a critical factor for successful economic interaction between countries. We have all the mechanisms to implement this interaction, and they are working. The union has already achieved a lot in this area. About 75 percent of transactions are being carried out in national currencies today, which indicates the deepening integration interaction between our countries. We will continue this transition, and we expect that the share of settlements in national currencies will continue to increase.

Our regional countries’ efforts to create new opportunities for unblocking economic and transport connections is key to increasing the transport, logistics and export potential for all of them.

Today, a number of transport projects are being implemented to increase the volume of traffic in the East-West and North-South corridors, including those being aligned with China's Belt and Road Initiative.

We cannot avoid talking about the global economic trends that are being dictated by the need to build the Greater Eurasian Partnership. This initiative was proposed by President of Russia Vladimir Putin in 2015 as a comprehensive geopolitical effort to streamline the already existing multi-level, multi-speed integration processes in Eurasia.

The Eurasian Partnership concept implies the active participation of companies in the CIS countries, East Asia, the Middle East and the Persian Gulf in trade and economic cooperation in mutually beneficial formats. I would like to urge you all to pay attention to the results of the meeting of the heads of state of the Shanghai Cooperation Organisation, which ended just last Friday in Samarkand. I am sure that the Eurasian Partnership has broad development prospects for the future.

The change in political and economic architecture that is taking place today offers hope for a more just world order. We must use the strengths of Greater Eurasia to improve the lives of our people, as well as to strengthen Eurasian cooperation.

2 December 2022 Dmitry Chernyshenko: Bilateral trade between Russia and China grew by 30 percent in the nine months of 2022

The meeting took place during the President of Kazakhstan’s official visit to Russia.
28 November 2022 Meeting on current issues with deputy prime ministers

Mikhail Mishustin: Our economy continues to adapt to current challenges and has demonstrated resistance to a number of risks. This is largely the result of implementing the President’s instructions and the measures we have coordinated and included in the plan of priority actions to ensure the development of the Russian economy under external sanctions pressure.
22 November 2022 Meeting of High-Level Group of the Union State Council of Ministers The participants analysed joint efforts to strengthen Russian-Belarusian trade and economic cooperation.
22 November 2022 Mikhail Mishustin’s telephone conversation with Prime Minister of Azerbaijan Ali Asadov
1
Show More