Dmitry Chernyshenko had a meeting with President of the Republic of Abkhazia Aslan Bzhania. 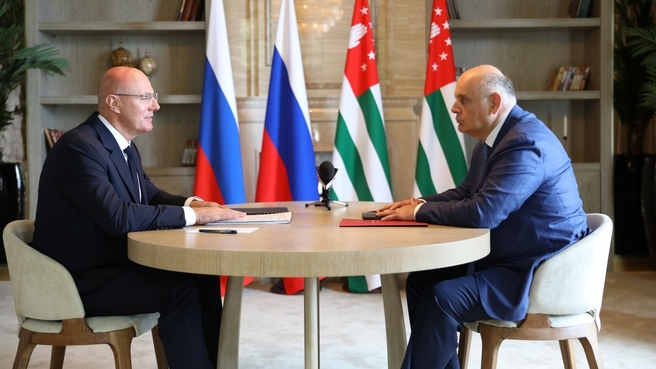 Russian Deputy Prime Minister Dmitry Chernyshenko had a meeting with President of the Republic of Abkhazia Aslan Bzhania. They focused on the development of the tourism industry and bilateral trade.    The Deputy Prime Minister noted that Russian-Abkhazian cooperation was developing dynamically. Under the guidance of the head of the republic, important investment projects continue to be implemented in the republic; mutual trade and tourist traffic are also expanding. In 2021, Russian citizens took over 5 million trips to Abkhazia. The number of tourist trips totalled two million in January-June 2022. “In late 2021, Russian-Abkhazian trade totalled 27 billion roubles, a 37-percent increase on 2020. The tourist traffic also continues to increase. We are confident that the arrival of Russian tour operators and companies on the Abkhazian market will positively influence the republic’s well-being and the local employment situation. Of course, it is necessary to increase the number of local companies that should take up vacant niches. Logistics are a key issue in expanding bilateral tourism. We see two bottlenecks, and a vehicle checkpoint is the first of them. The plan is to expand its daily capacity to 100,000 people and 20,000 cars. This work is underway. Air traffic is the second aspect. There are plans to overhaul the Sukhum Airport. I believe that regular air traffic will facilitate the republic’s economic growth and prosperity, and that it will attract numerous businesspersons and tourists from the Krasnodar Territory and neighbouring Sochi, as well as from all other Russian regions. The right conditions are in place for this,” Dmitry Chernyshenko said. “We see the tourism industry as a leading sector. We would like Russian investors to maintain their presence in the republic. Abkhazia, eastern Abkhazia in particular, has impressive potential. We hope that the pace of life in these areas will become completely different once the airport starts operating. The Psou checkpoint is our gateway to the world. We need to expedite efforts to resolve issues linked with expanding the checkpoint’s capacity,” Aslan Bzhania noted. The Deputy Prime Minister added that the reconstruction of the Adler multilateral vehicle checkpoint is included in the state programme Development of the Transport System. There are plans to complete the project in 2025.