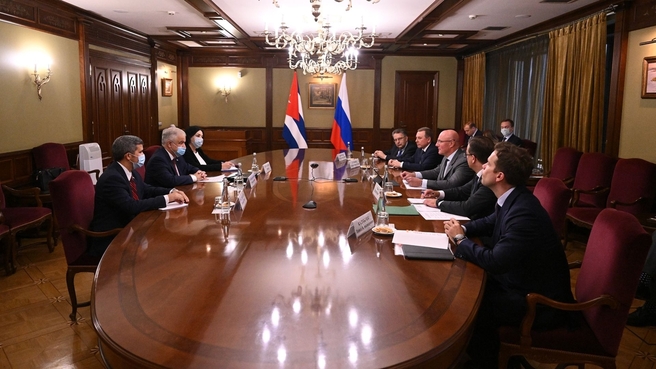 The meeting took place ahead of the 19th session of the Russian-Cuban Intergovernmental Commission scheduled to take place in Moscow in October.

In August 2022, in accordance with the directive of Prime Minister Mikhail Mishustin, Dmitry Chernyshenko was appointed Co-Chair of the Russian-Cuban Commission for Trade, Economic, Scientific and Technological Cooperation. Deputy Prime Minister Ricardo Cabrisas chairs the commission on behalf of the Republic of Cuba.

The meeting was dedicated to trade and economic cooperation, priority Russian-Cuban projects, and coordinating work in monetary issues, higher education and tourism.

The Deputy Prime Minister opened the meeting by congratulating the ambassador on receiving the Order of Friendship and expressing condolences on the fire at the oil storage facility in the Cuban province of Matanzas.

Dmitry Chernyshenko noted that the Russian Government is discussing necessary assistance for Cuba, including with improving fire and rescue services in the republic. Russian producers are also ready to supply medication and medical devices to the people of Cuba.

The Deputy Prime Minister noted that Russia and Cuba have significant trade and economic potential that should be developed further. The meeting participants specifically focused on cooperation in finances, banking and joint projects.

“One of the key topics of our cooperation is building independent systems for mutual payments. By re-routing payments, we can work around intermediary financial organisations from unfriendly countries and reduce the pressure of sanctions on our trade. We welcome the approval of a list of priority Russian-Cuban projects to be finished by 2030. Subsequently, we can concentrate our efforts and start working on them stage by stage,” Dmitry Chernyshenko said.

He added that at his instruction, Russian ministries and agencies are working to develop new ways to increase the effectiveness of joint projects in transport and energy, restoring the Cuban air fleet, military and technical cooperation, and other areas.

The Cuban Ambassador congratulated the Deputy Prime Minister on his appointment as Co-Chair of the Russian-Cuban Commission for Trade, Economic, Scientific and Technological Cooperation.

“Deputy Prime Minister of Cuba Ricardo Cabrisas offers his best wishes and hopes to meet with you soon. Cuba is interested in developing bilateral relations in many areas, including in energy and agriculture. As concerns tourism, Russia is one of Cuba’s biggest sources of tourist traffic. We believe it is possible to increase this traffic by arranging additional flights. We also want to thank Russia for cooperation in higher education,” Julio Antonio Garmendia Pena said.