Alexander Novak meets with Ali Salehabadi, Governor of the Central Bank of the Islamic Republic of Iran

The meeting was focused on cooperation in finance, banking and investment. 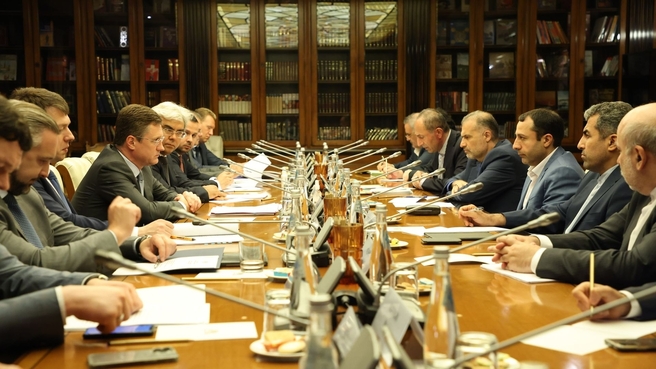 Deputy Prime Minister of Russia Alexander Novak met with Governor of the Central Bank of the Islamic Republic of Iran Ali Salehabadi.

During the meeting, the officials discussed development of cooperation in the financial and banking spheres, specifically, the increased use of national currencies in mutual settlements, joint work on financial messaging systems, as well as financing promising investment projects in transport infrastructure and the oil and gas sectors, including petrochemicals and refining.

“We see significant growth in trade: 81 percent last year and 31 percent this year. Our countries’ leaders have set a goal to further promote cooperation. Our companies are interested in intensifying trade, so the development of cooperation in the financial and banking sector is among our priorities,” the Deputy Prime Minister emphasised.

Iran also considers Russia a strategic partner, Ali Salehabadi said. He added that an increase in the use of national currencies in mutual transactions can become a key tool in stepping up investment cooperation.

“The use of global currencies like the US dollar is not only an economic tool but also a political tool. Those who oppose the US’s unilateral actions end up being sanctioned,” Ali Salehabadi said.

The meeting was held on the sidelines of the 2nd Caspian Economic Forum.
6 October 2022 Mikhail Mishustin’s meeting with Prime Minister of Azerbaijan Ali Asadov

The oil-producing countries made a common decision to reduce production by two million barrels per day.
5 October 2022 Mikhail Mishustin at the Russian agro-industrial exhibition Golden Autumn 2022

The Prime Minister spoke at the strategic session, Food Security in Russia and the World, and presented state awards to agricultural workers for their great contribution to the development of agriculture.
3 October 2022 Russia-Belarus talks

The agenda: the draft federal budget and draft budgets of state extra-budgetary funds, the socioeconomic development forecast, the guidelines for the unified state credit and fiscal policy for 2023 and the 2024-2025 planning period.
1
Show More