Various aspects of cooperation between the Government and the Federation Council in the law-marking process were discussed. 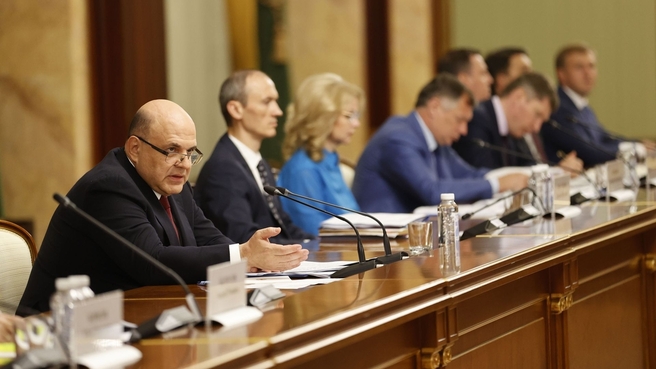 Today’s meeting helps us maintain the positive traditions of the Government and the Federation Council. We hold our meetings to review our approaches to law-making, which includes drafting new initiatives for the development of Russia’s regions.

This systematic work is being carried out under goals set by the President. When delivering his speech at the Council of Legislators, the head of state talked about the need for joint action to develop anti-crisis measures, strengthen parliamentary control over the implementation of decisions, and most importantly, about providing support for people.

These are the priorities we follow in our cooperation. We believe that effective interaction has been established between the senators and the Government through this Federation Council platform and its committees, as well as in the Government commissions, many of which include senators.

We also see the activity on promoting new initiatives that have been co-developed by members of the Federation Council.

The most significant activities, which I would like to mention, include the extension of dacha amnesty for nine years (until 2031). The same document has simplified the procedure for granting ownership of land plots with residential buildings. I know how long and effectively the senators worked to resolve all these problems.

In addition, the senators took part in adopting a package of measures to support families with children. A new regulation has been introduced, which simplifies receiving state assistance for those who have lost their breadwinner. In addition, the age of children who can travel free on suburban trains has been raised from 5 to 7.

At the senators’ initiative, the right to additional leave was given to people who care for the disabled, primarily category one. We are talking about an additional unpaid leave each year for up to two weeks.

Another important law, co-drafted by members of the upper chamber of the parliament, protects the social payments of citizens from being written off to pay off debt, which is also a long-term problem that we have been discussing for some time, including benefits received by pregnant women, low-income people, as well as people who have entered into the social contract.

During the spring session, the senators put forward a number of other important initiatives. One of them concerns increasing people’s safety during the operation of gas distribution facilities by specialised organisations. The government has submitted its input. We expect that the proposed changes will permit these companies to more fully take ownership of gas systems in order to reduce the risk of misuse. This has also been a longstanding question.

Children’s recreation is given special focus, and I know Ms Matviyenko, that you and your colleagues pay special attention to it. And amendments to the current law, proposed by the senators, ban the re-profiling of children’s health organisations, and changing the legal status of land in this category and the land type permitted for use for such recreation.

Together with the State Duma deputies, the Federation Council members drafted a range of bills regulating the financial markets. They are aimed at protecting the interests of investors placing securities and applicants who take out consumer loans. In this case, it is especially important that people have access to accurate information on the costs associated with obtaining or servicing a consumer loan so they can make a choice by comparing loan offers from various lenders.

Federation Council members offer high-quality initiatives and well-developed approaches that can be seen in the list of instructions issued, in particular by me, following our previous meeting. Ms Matviyenko, almost all of them have been fulfilled – there were 26 of them, and we are closely monitoring them – or are at the final stage of implementation.

I believe that after our meeting today we will outline specific solutions. The government has already begun drafting next year’s budget, which is an important job. We look forward to effective cooperation with you in this area too.