Mikhail Mishustin: “The pressure the collective West is putting on the individual member states of the union is becoming stronger and affects all of them. Our economies are inextricably linked; therefore, we need to respond to the unfriendly steps together. The main goal is to minimise the impact of sanctions on the people and strengthen macroeconomic stability.”

Mikhail Mishustin’s remarks at a meeting

Delegation heads taking part in an expanded meeting of the Eurasian Intergovernmental Council:

Prime Minister of the Republic of Armenia Nikol Pashinyan; 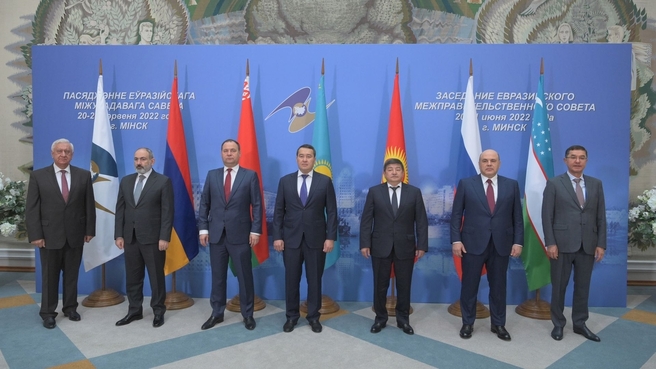 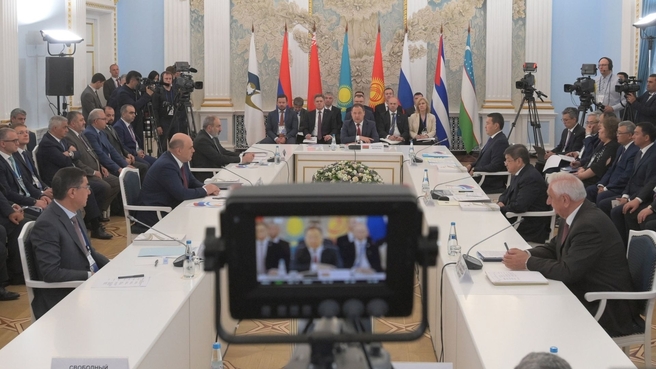 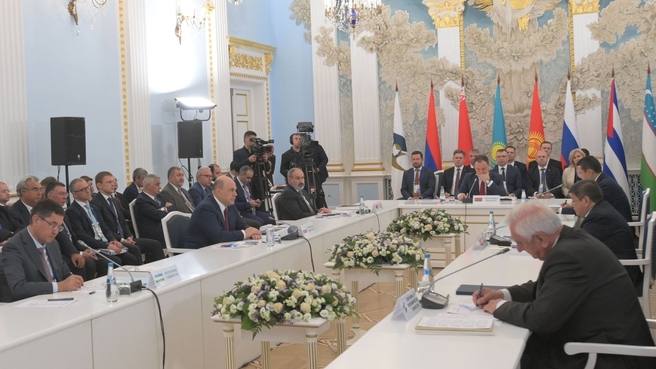 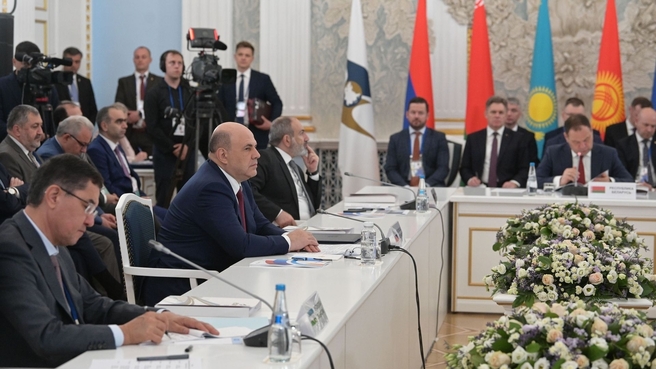 Mikhail Mishustin at the expanded meeting of the Eurasian Intergovernmental Council

Prime Minister of the Republic of Kazakhstan Alikhan Smailov;

Prime Minister of the Republic of Cuba Manuel Marrero Cruz (via video link-up);

Chairman of the Board of the Eurasian Economic Commission Mikhail Myasnikovich.

Mikhail Mishustin at the expanded meeting of the Eurasian Intergovernmental Council

Mikhail Mishustin’s remarks at a meeting of the Eurasian Intergovernmental Council:

First of all, I would also like to warmly thank our Belarusian colleagues for organising our meeting.

Today, we are meeting on the eve of a significant date. The Great Patriotic War, which began 81 years ago, on 22 June 1941, claimed tens of millions of lives. Russia marks this date as the Day of Memory and Sorrow. Our fraternal nations fought heroically at the front and worked selflessly at home. It is the duty of current and future generations to preserve the memory of the Great Patriotic War and to prevent the rewriting of the history of our Victory.

And now, let us discuss the topics of today’s meeting.

Quite recently, in May, we marked the eighth anniversary of signing the Treaty on the Eurasian Economic Union. This is a short period of time for an international organisation. The EAEU quickly proved its effectiveness and relevance, and it also confirmed its ability to promptly respond to various challenges and risks.

As President of the Russian Federation Vladimir Putin noted at the St Petersburg International Economic Forum, intra-EAEU trade continues to expand, and it is growing more quickly than trade with other states.

We also have good results in other key areas of cooperation including industry, finance and agriculture. Most importantly, the citizens of our countries feel the benefits of integration in their daily lives. The Russian President noted this in his speech at the recent Supreme Eurasian Economic Council meeting.

It is important to ensure the further progressive development of Eurasian integration and to overcome together the results of instability in the international economic system during this new, difficult geopolitical reality.

The collective West’s pressure on the individual states of the five countries is growing. This affects all members of the union. Our economies are closely connected, so we can only effectively respond to unfriendly steps together.

The main goal is to minimise the impact of the sanctions on citizens and strengthen macroeconomic stability.

Necessary decisions are made as part of the implementation of the list of measures to improve the sustainability of our economies. New initiatives are being discussed in the special high-level working group.

I will elaborate on the most significant areas that should be given special attention.

First is the work on creating conditions for businesses to operate normally in the current situation. To do this, the rules for unified customs, customs-tariff, non-tariff and technical regulation are being adjusted. We suggest expediting the transition to our own international financial and settlement mechanisms, and expanding the practice of using national currencies in foreign trade transactions with those countries that have proven to be reliable partners.

It is necessary to step up cooperation in import substitution as well, I mean priority high-tech industries. By the way, we saw an excellent example of this yesterday when we visited Amkodor with Roman [Golovchenko] and the Prime Minister of Uzbekistan.

We must reduce our dependence on foreign imports and launch our own joint innovation projects to develop and produce the products we need.

We will need to use the competitive advantages of all union members, cooperation in ICT, aerospace manufacturing and pharmaceuticals.

We also suggest intensifying cooperation on the digital agenda. The introduction of advanced technologies reduces many types of cost, especially in planning, in decision-making, and when putting plans into practice. The development of a digital marking system in the EAEU is a promising area in this regard. This has already proven effective. We will continue to improve the regulatory legal framework for internal and external trade in the union, and coordinate our steps to combat the illegal trafficking of industrial products.

Food security is another important subject.

The EAEU countries are completely self-sufficient in terms of staple foods and agricultural products. At the same time, we will continue to protect the interests of our producers, incentivise import substitution and create common markets in the agro-industrial sector.

The sanctions policies of unfriendly countries have disrupted logistics and trade chains all over the world. This creates new tasks for us.

Today, it is important to expedite the development of the infrastructure that will become part of the East-West and North-South international transport corridors. As our colleagues have noted, this also includes efforts to align this project with China’s Belt and Road Initiative.

We need this to connect Europe and Asia via the shortest route and to build the Greater Eurasian Partnership, as proposed by President of Russia Vladimir Putin.

The free movement of goods within the union, the elimination of internal customs borders, transport integration, and diverse infrastructure will be key advantages in the global competition for freight transiting.

I would like to mention the creation of a competitive environment in cross-border markets separately. Today, we are reviewing the annual report by the Eurasian Economic Commission on this subject.

The last few years have shown that healthy competition has a major impact on economic stability in any circumstance. It is necessary to continue monitoring compliance with common regulations in this respect, to plan new approaches to evaluating the state of competition in digital markets and the procedure for determining their cross-border status to create favourable conditions for establishing equitable mobile communications rates within the international roaming network.

Compliance with market economies and fair competition principles are fundamental standards in the Eurasian Economic Union, together with efforts to promote the four freedoms of movement: goods, services, capital and human resources.

And one more thing: we believe that we should not relax the pace of the union’s work on the climate agenda. The EAEU has the potential for considerable interaction here. We need to draft and approve a common policy on this track more quickly.

We urge our partners to expand their cooperation on climate issues, including within the framework of the ad hoc high-level working group.

There is growing interest in cooperation with the EAEU in the world. We propose strengthening our contacts with our friends and partners, primarily with members of the Commonwealth of Independent States. We need to build constructive cooperation with the countries of the Asia-Pacific Region, Latin America and Africa, implement the entire range of agreements with China, and expedite talks to expand trade with Egypt, India and Iran.

Our alliance is aimed at a productive dialogue with leading regional associations including the SCO and ASEAN. All this will provide significant advantages for promoting Eurasian goods in foreign markets and, of course, strengthening the role of the EAEU in the international arena.

– Directive “On the main approaches to the implementation of measures to regulate the export of certain types of goods by the EAEU member states”;

– Instruction “On the progress of the draft agreement on alcohol market regulation within the Eurasian Economic Union”;

– Instruction “On the progress of the draft protocol on amendments to the Treaty on the Eurasian Economic Union dated 29 May 2014 regarding the procedure for collecting indirect taxes on the online sales of goods to individuals”;

– Decision “On Amending Clause 2 of Decision No. 2 of the Eurasian Intergovernmental Council dated 10 April 2020”;

– Instruction “On the creation and development of transport infrastructure in the Eurasian Economic Union member states in the East-West and North-South corridors, including as part of the alignment with China’s Belt and Road Initiative”;

– Directive “on the commission for cooperation and import substitution in priority and high-tech industries within the Eurasian Economic Union”;

– Directive “On the application of the goods accounting system provided for in Paragraph 10 of Article 3 of the Protocol on Certain Issues Concerning the Import and Circulation of Goods in the Eurasian Economic Union Customs Territory dated 16 October 2015”;

– Directive “On the 2021 annual report of the Eurasian Economic Commission on the state of competition in cross-border markets and measures taken to curb violations of the general rules of competition”;

– Directive “On establishing the time and place of the Eurasian Intergovernmental Council meeting.”