Alexander Novak’s working visit to the Republic of Turkey

Deputy Prime Minister Alexander Novak met with Vice President of Turkey Fuat Oktay, held a meeting of the co-chairs of the Intergovernmental Commission and discussed prospects of cooperation with representatives of Turkish businesses. 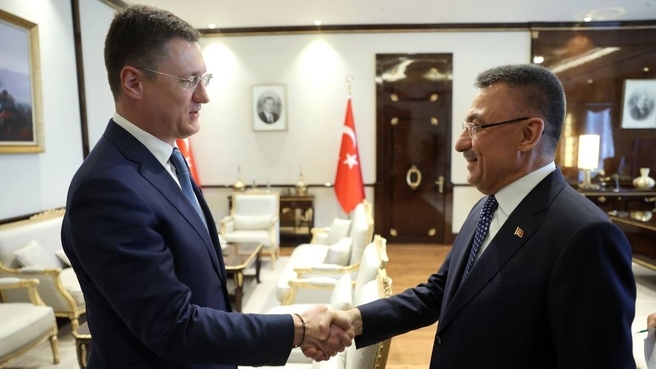 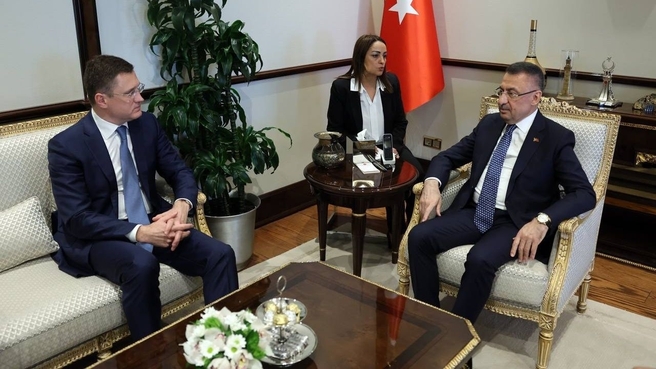 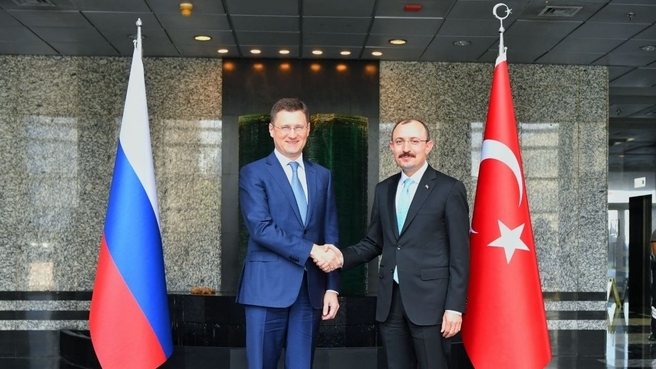 Alexander Novak’s working visit to the Republic of Turkey. With Mehmet Mus, Turkish Minister of Trade and Co-Chair of the Mixed Intergovernmental Commission on Trade and Economic Cooperation

Deputy Prime Minister of the Russian Federation Alexander Novak paid a working visit to the Republic of Turkey.

During the visit, Mr Novak reviewed topical issues of bilateral cooperation with Vice President of Turkey Fuat Oktay. He continued the discussion of economic cooperation between the two countries at the bilateral meeting with Mehmet Mus, Turkish Minister of Trade and Co-Chair of the Mixed Intergovernmental Commission on Trade and Economic Cooperation.

As co-chairs of the Commission, Alexander Novak and Mehmet Mus discussed in detail the dynamics of bilateral trade and cooperation on major bilateral economic projects. They paid special attention to the preparations for the ninth meeting of the Russia-Turkey Cooperation Council at the top level, and the holding of the next, 18th session of the Commission.

Russia-Turkey business cooperation has reached unprecedented heights thanks to intensive political dialogue at the highest levels, Mr Novak said at the meeting. He noted that the Commission has become an efficient platform for discussing urgent bilateral issues both at government level and with the participation of the business community. “We have always found a common language with our Turkish friends on the most diverse issues. The Commission is constantly working on all areas of bilateral economic cooperation. Overall, our trade is growing despite the current economic environment – it increased by 57 percent in 2021 to reach $33 billion. Just this year, it went up 2.1 times to $13.7 billion in the first quarter alone. The current circumstances are opening up for our states new opportunities for strengthening our mutually beneficial ties,” he said.

The governments of both countries are fully satisfied with the development of their major joint projects – both completed ones like Blue Stream and Turkish Stream and Turkey’s first nuclear power plant Akkuyu that is under construction now.

According to the Deputy Prime Minister, to preserve the positive dynamics, the two countries should continue lowering barriers to trade. The customs services of the two countries are actively developing cooperation with this aim in view, said Alexander Novak. “In our opinion, one of the best prospects is the initiative to create a mechanism for mutual recognition of the national powers of an authorised economic operator. Now that our countries are working to promote bilateral trade, it is important to launch this project,” Mr Novak said.

The co-chairs of the Commission also reviewed cooperation in finance and banking, transport and logistics, industry and energy, and agriculture and tourism.

In transport, the two countries are trying to remove bottlenecks in export infrastructure that prevent them from considerably increasing trade.

Looking ahead, Russia and Turkey may start cooperating in new, more technologically sophisticated fields, such as shipbuilding, aviation, cosmonautics and pharmaceuticals, and may also work together on digital and energy efficient technology, Alexander Novak said at the meeting with representatives of Russian and Turkish business circles.

The Deputy Prime Minister said improved business cooperation would allow both countries to enhance their economic security in the face of new global economic challenges, disruption of the mechanisms of market price formation and supply chains, and inflation in the world’s largest economies. “Russian entrepreneurs are very interested in Turkish businesses and the number of companies wishing to work with them is growing. There are many economic niches that have been freed up and can be filled by Turkish products” Mr Novak noted.

He told business representatives that to support domestic businesses and trade with friendly countries the Russian Government has already drafted and launched a number of economic support measures. “In cooperation with our EAEU partners, we lifted import duties for 1,300 items or 15 percent of Russian imports and reduced product certification procedures. We are removing transport and logistics barriers and investing additional budget funds in Russian regions, industries and major infrastructure construction projects. A number of commodities have been exempted from import duties. We are supporting pharmaceutical companies and granting easy loans to industry,” said Alexander Novak.