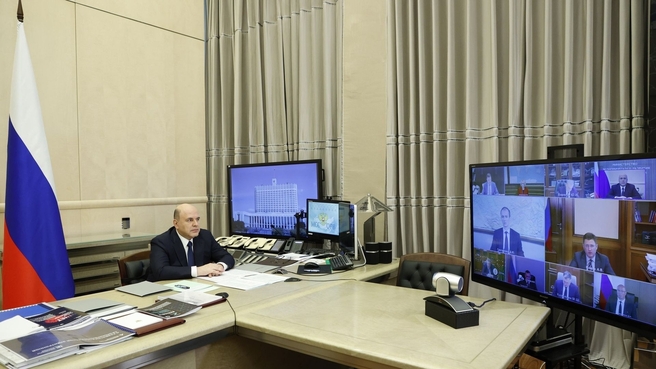 The Government continues to set up a green corridor for importing vital goods into Russia. This concerns goods that are not yet manufactured in Russia and the entire Eurasian Economic Union.

We have already adopted the relevant decisions with regard to essential goods, namely, medications and foodstuffs. Quite recently, we discussed this at a meeting with the head of the Federal Customs Service.

We are now charging zero import duties on production equipment, components, feedstock and materials for implementing major investment projects, primarily in agriculture, the processing industry, the construction sector, transportation and the IT sphere.

Mr Belousov (addressing Andrei Belousov), I would like to ask you to coordinate this work. This includes the drafting of proposals on high-priority projects, due to be covered by the preferential customs regime. It is important that we help Russian investors overcome the consequences of economic sanctions imposed by unfriendly states.

We will also considerably simplify regulations for importing electronic devices with cryptographic systems in 2022. Such devices include computers, tablet computers, laptops, desktops and smartphones. People now find it hard to imagine their life without them.

The Government has decided to temporarily allow sectoral associations to draw up special authorisation documents. This will make it easier to import technology and to meet domestic market demand.

Another measure concerns organisations of vital importance. We will ease customs procedures for them when importing cryptography systems which are components for industrial production of electronic equipment and technology. This will help prevent disruptions and delays in this sector.

And now, I would like to say a few words about supporting automotive enterprises amid the sanctions. We have already allowed major Russian automakers to delay payments of vehicle recycling fees until December. This will free up substantial resources for replenishing circulating assets, so that their assembly lines would operate without interruption.

The Government will apply this measure more widely. Other companies that have signed special investment contracts with the state will also be able to take advantage of these opportunities. This includes foreign investors who have built their plants in Russia.

Consequently, this decision will serve as another measure for maintaining regional employment. This remains one of our top priorities. Last week, at a meeting on economic matters, the President noted the need for expanding the business community’s capabilities in the current conditions. The Government continues this work today.

We have adopted a decision on small and medium-sized companies in the North Caucasus Federal District. The Government will allocate another one billion-plus roubles for providing them with loans and the relevant guarantees.

Under this plan, enterprises will be able to obtain almost 14 billion roubles in the next four years. They can also use bank products, take out loans, including soft loans, for business expansion and also for their current needs.