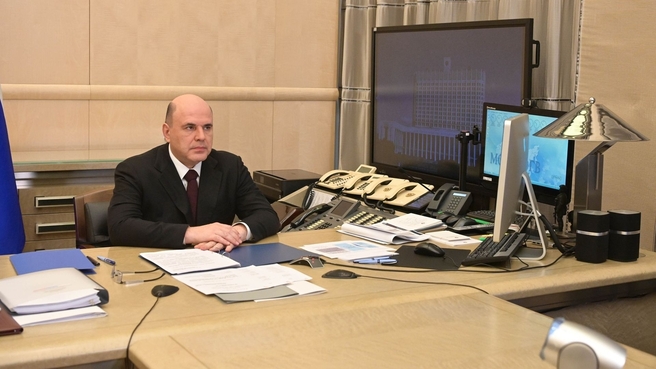 I would like to say a few words about decisions that have been adopted before we start discussing the agenda.

Last week, the President noted at a meeting with Government members that businesses should play a key role in overcoming current problems. Consequently, we still see support for private initiatives as a high-priority task.

Today, the Government will provide additional assistance to young entrepreneurs under 25. They will be able to receive grants worth between 100,000 and 500,000 roubles for starting or expanding their own businesses. And those working in the Arctic zone will be eligible for up to one million roubles.

Earlier, only enterprises implementing social projects had this opportunity. From now on, even more promising companies working in various sectors will obtain funding. The budget already stipulates the required allocations totalling over two billion roubles in 2022.

Young people always have many fresh and useful ideas, and state support will help implement them and score future successes.

Here is another incentive for businesses.

On the initiative of the President of Russia, national IT companies will be exempted from scheduled checks for a period of three years during state and municipal oversight. The relevant resolution has been signed.

In the past two years, the Government has halved the number of oversight measures, as regards enterprises and entrepreneurs. Two weeks ago, on 10 March, we declared a moratorium on scheduled and unscheduled checks in conditions of external pressure until the end of the year. This moratorium will be enforced until late 2022, and it applies to absolutely all Russian companies, and not just small and medium-sized businesses, as has been the case during the pandemic. Of course, this does not include cases when people’s lives and their health are at stake.

Colleagues, we have accomplished a lot. It is important to unfailingly abide by all official requirements and not to violate them. Today, companies need to readjust many production processes and retain their staff. And we are moving to support enterprises. We should not aggravate the situation and risk their trust.

I repeat, scheduled and unscheduled checks should be conducted in exceptional cases.

Businesses see this as a highly sensitive issue, and it is therefore very important to launch and monitor this work. Mr Grigorenko (addressing Dmitry Grigorenko), please oversee this issue and provide information on implementing the moratorium and on all changes in this sphere.

And now, let’s discuss the agenda.

Yesterday, the President chaired a meeting with Government members and instructed us to formalise the relevant regulatory framework as soon as possible. This framework will allow Russian regions to finance their spending more effectively. Today, we will review essential legislative amendments.

This year, we will expand treasury budget loans to ten percent of the regions’ own revenues, and we will extend the deadline for providing them.

Russian regions will be able to obtain additional federal-budget loans for repaying commercial loans and securities. The regions will not have to pay anything for them throughout 2022.

This will make it possible to reduce the debt burden on the Russian Federation’s regions, to reduce debt-servicing expenses and to spend more on implementing important social initiatives and projects.

The participants in the meeting with the President also discussed in detail the implementation of the infrastructure and housing construction programmes. Faced with sanctions, we need additional tools to prevent the work from slowing down.

Today, we will consider a legislative initiative intended to introduce amendments to the Urban Planning Code. The amendments have been drafted by the emergency response team and included in the priority action plan.

First of all, we will simplify as much as possible the interaction between the state and construction investors. There should be no barriers left that could delay the implementation and launch of infrastructure projects. For example, during the administrative finalisation and approval, it will no longer be possible to request that companies provide a package of documents which the authorities already have in their possession.

The Government will get the right to determine priority construction projects based on simplified procedures. This will make it possible to cut construction timeframes by one year on average, which means that businesses will be able to considerably reduce their financial costs and put into operation civil infrastructure needed by the public more rapidly.

The Government will be given powers to promptly take decisions on the amount of acceptable advance payments under overhaul contracts for multiple occupancy buildings. Today, they do not exceed 30 percent. We will increase this threshold based on the existing situation. The important thing is to continue renovating the available housing strictly in accordance with the existing plans so that people don’t have to grapple with additional problems.

This also concerns the title registration for plots of land intended for summer cottages. It has been suggested to speed up this procedure, which should not exceed three working days.

I would like to ask the Ministry of Construction, jointly with their colleagues, to prepare the necessary regulations so that the new construction-sector incentives become fully operational after the passing of the law. This decision has proved its effectiveness with regard to the priority development of the road sector.

Yet another issue on the agenda is related to additional support for agriculture and fisheries. It is important to prevent high price fluctuations on the food market. We also discussed this at the meeting with the President.

Comprehensive measures are needed in this respect. Measures that have proved effective include the Government’s annual subsidies for carriage of agricultural produce by rail. These subsidies help agricultural producers to considerably reduce their transport costs. Last year, this programme was expanded owing to the addition of several new routes, including the Crimean one.

This year, there were plans to allocate over 2.3 billion roubles for this purpose from the federal budget. Under the new conditions, this amount of funding is insufficient.

Today, we will allocate an additional 2 billion roubles to boost freight carriage by rail at preferential rates by at least 1 million tonnes.

This will help to ensure the deliveries of grain, oil crops, vegetables and fish, as well as mineral fertilisers essential for any sowing campaign, to the Russian regions.

Today, we will also consider amendments to laws on government procurement for organisations partially owned by the state.

Previously, we took the decision to cut by half – down to seven days – the terms of payment under contracts that state companies sign with small and medium-sized businesses.

Currently, there is a proposal to introduce identical terms for state agencies and municipal institutions in situations where they make purchases using budget money. They will also have to pay for goods delivered, work performed, or services provided within seven working days of the signing of acceptance documents. This will ensure additional protection for our entrepreneurs and create more comfortable and predictable conditions for business development.

Now let us turn to children’s rest and summer recreation. We discussed this issue in detail last week.

On the President’s instructions, the Government has extended the highly popular programme under which parents get 50 percent cashback on children’s summer camp vouchers. This year, we will increase funding to make it available for no fewer than 450,000 children. For this purpose, we will allocate 7.5 billion roubles.

The programme will be launched quite soon, on 31 March, almost one month before 1 May, to enable parents to prepare in an orderly manner and choose a holiday destination for their child well in advance, and to deal with other matters without haste.