The discussion focused on topical issues related to the deepening of integration within the EAEU, such as interaction in customs regulation, goods traceability mechanisms and cooperation in industry.

The list of delegation heads taking part in an expanded meeting of the Eurasian Intergovernmental Council: 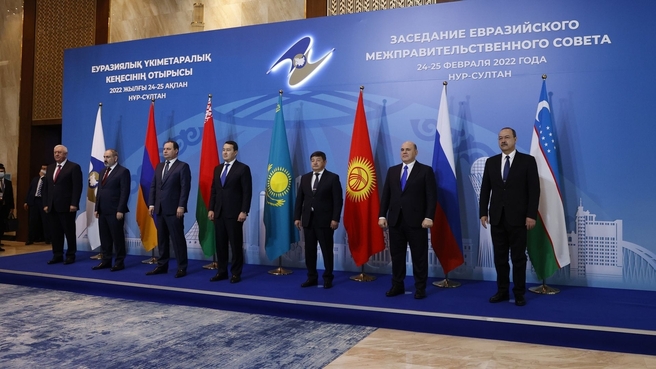 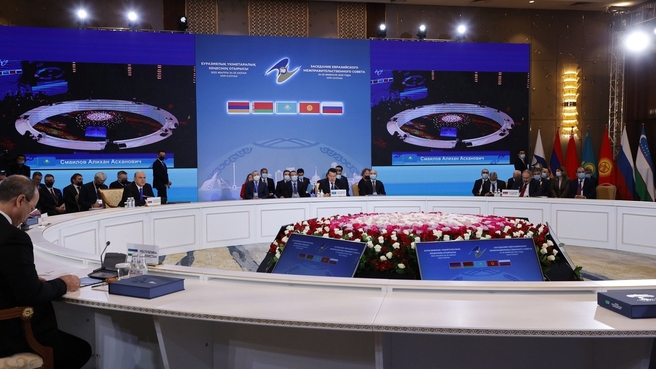 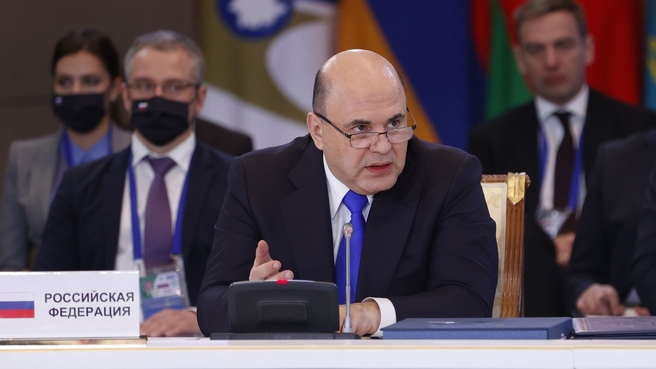 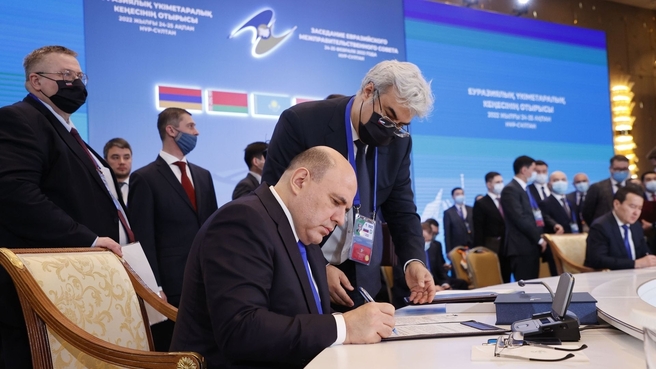 Signing documents adopted at a meeting of the Eurasian Intergovernmental Council 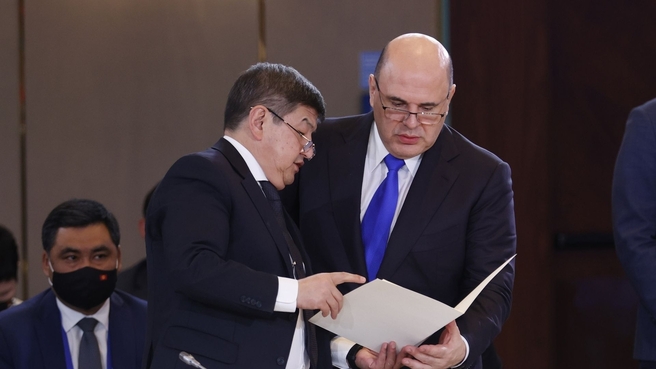 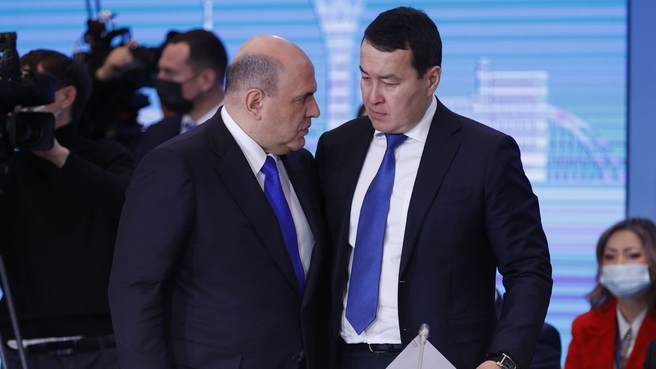 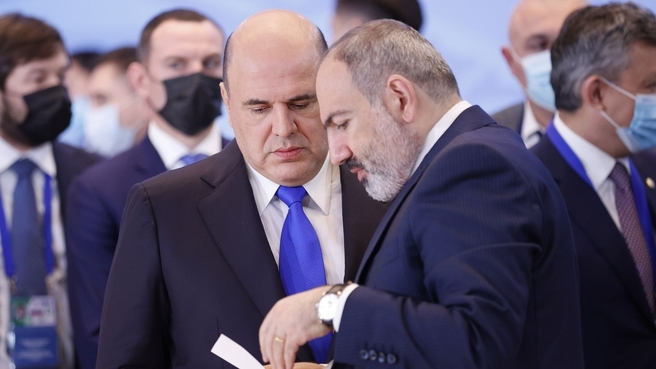 Chairman of the Eurasian Economic Commission Board Mikhail Myasnikovich.

Mikhail Mishustin’s remarks at the meeting of the Eurasian Intergovernmental Council:

First of all, I would like to join in the words of gratitude to our Kazakhstani friends for their hospitality and excellent organisation of our meeting.

I would like to use this occasion to congratulate Mr Smailov, who now heads the Government of Kazakhstan and represents the country at a meeting of the Eurasian Intergovernmental Council for the first time. We hope for further active and constructive cooperation with our Kazakhstani partners.

We will continue our discussion on the priority issues of Eurasian integration and make decisions necessary to develop trade, economic and cultural ties, as well as to improve the living standards and people’s welfare.

This is especially important in the current situation. President of Russia Vladimir Putin has already assessed it and outlined the tasks Russia is facing. Our meeting today is the best proof that we stand together in any situation and intend to work together to promote our cooperation in all areas despite the external pressure and Western countries’ attempts to divide us.

It is indicative that last year the EAEU attained record-breaking socioeconomic development parameters. In January-November 2021, the joint GDP grew by almost 4.5 percent. Trade between member states soared by one-third, and EAEU exports went up by 42.5 percent.

It is important that these statistics exceed the pre-pandemic levels achieved in 2019. For example, mutual trade grew by almost 18 percent, with foreign trade increasing by 12.6 percent.

These results were made possible due to the well-coordinated actions by all of the EAEU integration organisations. In the future, we must find optimal and effective solutions for spurring economic growth and, as I have already said, for increasing the wellbeing of our peoples.

Our main guideline is the implementation of Strategic Directions for Developing Eurasian Economic Integration to 2025. This extensive action plan contains over 200 positions. We will continue our efforts to improve the common market and eliminate barriers hampering the four freedoms, namely, the movement of goods, services, capital and labour.

Industrial co-production incentives are a high-priority aspect of our joint activities. In January-November 2021, EAEU countries increased their industrial output by over five percent. We should expand cooperation by attracting investment in joint projects by marketing goods abroad and creating Eurasian value-added chains.

We must introduce a tracking and monitoring system in order to combat grey imports and illegal sales. Our colleagues have discussed this. We support the commission’s decision to launch a pilot project for monitoring sales of refrigerators and freezers from 1 June. If the project proves a success, it will be possible to extend the practice to other goods and to monitor their movement from the manufacturers to consumers.

I would also like to note the great significance of the agreement on using navigation seals that was signed by the presidents of our countries in December 2021. It has become the foundation for establishing a seamless customs transit system which uses advanced digital technologies. And now, it is necessary to ensure the fastest possible ratification of this agreement by all member states.

We will also continue to create a common digital space.

We have already launched a joint unified headhunting service, Work without Borders. The Travel without COVID-19 app is widely used. Similar user-friendly digital solutions should be introduced in other spheres, too.

We should continue to improve the unified technical regulation system within the EAEU based on digital solutions. It is already well-developed: it has no analogues in international practice in terms of coverage and efficiency of implementation. More than 50 technical regulations have been adopted for 85 percent of products on the union market.

It is in our interests to launch online services that can speed up the adoption of regulations on new goods and create a more effective mechanism to monitor their observance. As a result, better and safer products will reach the common market faster, which means our citizens will have easier access to them.

We are launching new sought-after initiatives within the union, such as the Eurasian Agro Express. Its implementation will ensure the prompt delivery of union agricultural products to Asian and European countries by railway, with tariffs and speeds competitive with sea transport. This project, with its high integration factor, once again reaffirms the necessity of the Eurasian Economic Union.

The climate agenda is another important topic. Most countries place a special emphasis on the green economy. The union has enormous potential for cooperation in this area, as has been reaffirmed by our leaders at a meeting of the Supreme Eurasian Economic Council. President of Russia Vladimir Putin called for the unification of carbon reporting standards. Here we consider it necessary to speed up the development and adoption of a common economic policy in this area.

In this sphere, as well as in other areas of international cooperation, the EAEU is aimed at partnering with leading regional associations, above all the CIS, SCO, and ASEAN.

Last year Kazakhstan’s chairmanship in the EAEU bodies concluded successfully. We managed to make progress in many areas of integration and achieve good economic results.

Today we are holding the first council meeting under the chairmanship of Kyrgyzstan. I would like to wish our colleagues successful and effective work.

Unity, mutual trust between member states and smooth joint action to benefit people will ensure the successful development of the union for years to come.

– Instruction regarding the implementation of the Agreement on Using Navigation Seals for Tracking Shipments in the Eurasian Economic Union.

– Instruction setting the import customs duty as part of the Eurasian Economic Union’s Common Customs Tariff for specific kinds of motor vehicles with electric power drivetrains and amending the list of goods subject to import duties in the Republic of Kazakhstan, which are lower than the Eurasian Economic Union’s Common Customs Tariff as per its commitments to the World Trade Organisation, and amending the size of these duties.

– Directive on the Current State and Prospects for Developing the Eurasian Economic Union’s Integrated Information System.

– Instruction on the Draft Protocol Amending the Treaty on the Eurasian Economic Union of 29 May 2014 Regarding Indirect Tax Administration in E-Commerce by Individuals.

– Instruction on the participation of the Republic of Uzbekistan in certain initiatives of the Eurasian Economic Union.

– Directive on the Plan of Action (Roadmap) to Expand Industrial Cooperation in Civilian Aircraft Manufacturing in Eurasian Economic Union Member States in 2022-2023.