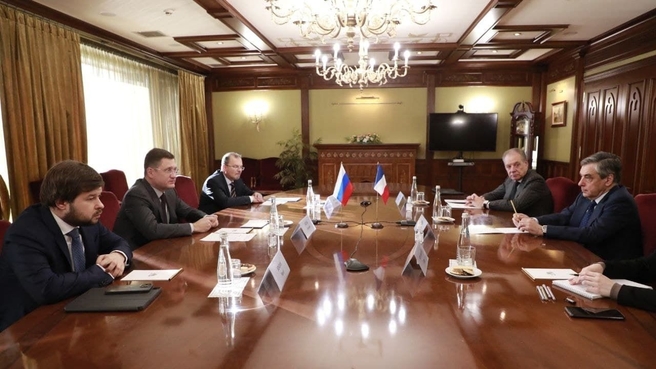 Russian Deputy Prime Minister Alexander Novak met with former Prime Minister of the French Republic Francois Fillon, Member of the Board of Directors at Sibur Holding and Zarubezhneft.

During the meeting, Mr Novak and Mr Fillon discussed bilateral interaction and prospects in the global energy sector. They focused on the development of green energy and Russian-French cooperation on current oil and gas projects.

“In the future, we can see impressive potential for developing joint projects and co-production arrangements in the field of green power generation, as well as hydrogen production and transportation. We have now established a large inter-departmental working group that includes government agency officials, corporate representatives and scientists. The Government has also approved a concept for hydrogen energy development, and Russia is currently implementing about 25 projects in this area,” the Deputy Prime Minister noted.

Mr Novak said Russia and France could explore the possibility of expanding cooperation in the field of hydrogen generation during the Russian-French Hydrogen Forum in the second half of 2022. “We see expansive potential in manufacturing various types of hydrogen and in developing technologies for its storage and transportation, as well as for recycling carbon dioxide during production and development of cutting-edge technology,” Mr Novak added.

The Hydrogen Forum can become a solid foundation for evaluating new tools for Russian-French cooperation in green energy technology, Mr Fillon emphasised at the meeting. “We hope leading Russian energy companies, including Gazprom and Rosatom that have their own sector-development plans, will take part in the forum. Interest is running high for hydrogen development today,” Mr Fillon added.

France consistently and successfully implements a national policy of introducing green energy sources, and Russia supports this, Mr Novak noted. “We praise the European Commission’s recent decision to rate nuclear and gas energy industries as transitional “green” sources of energy that can help achieve climate neutrality. We see a lot of potential for cooperation with our French partners in this field, especially in the context of the European Union’s demand for additional investment in energy projects. I am confident that it is not possible to build a stable energy industry with renewable energy sources alone; we also need basic generating stations. A well-balanced transition in energy sources should be part of sustainable economic growth,” Mr Novak noted.

8 hours ago Meeting with deputy prime ministers on current issues