Lead: The meeting was held via videoconference. 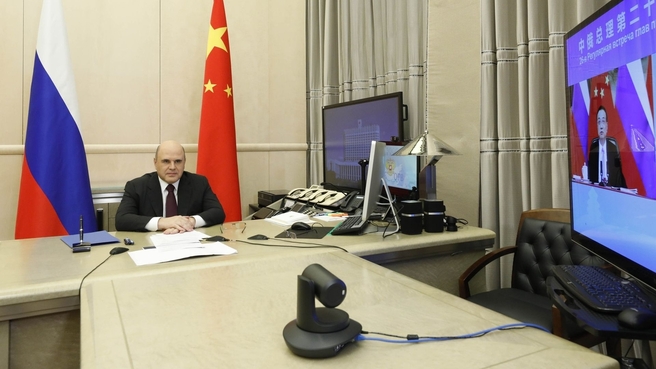 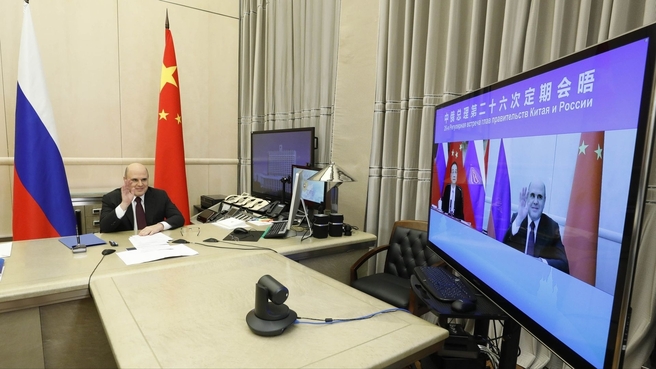 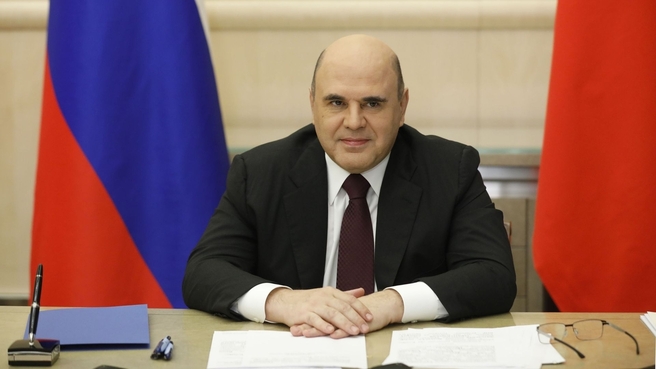 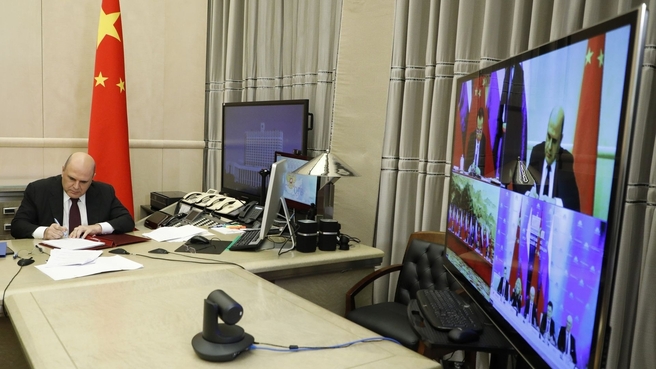 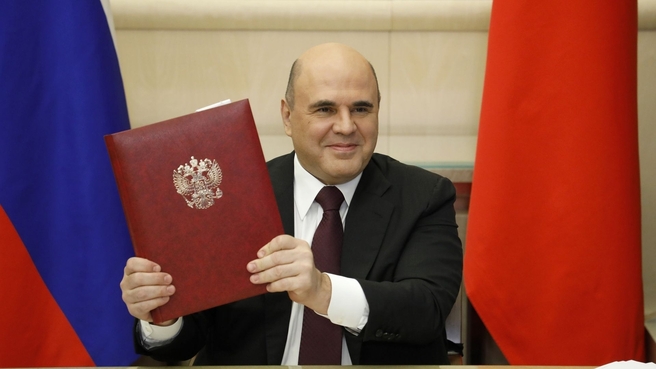 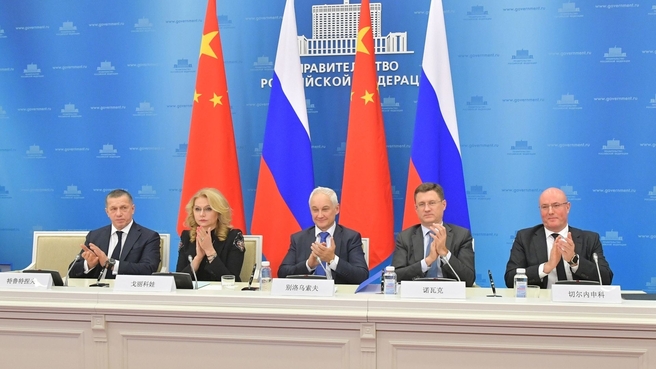 Li Keqiang (via interpreter):  Mr Prime Minister, I am very pleased to be holding the 26th regular meeting of heads of government with you, via videoconference.

We have recently participated in the SCO Heads of Government Council and ASEM meeting. This regular meeting, held online, is an opportunity to look back on the past year and assess the development of hands-on cooperation between the two countries across all areas, as well as to exchange views on the further deepening of interaction.

China and Russia are the largest neighbouring countries. We provide each other with development opportunities and are global partners. Moreover, this year we marked the 20th anniversary of the signing of the Treaty on Good Neighbourliness, Friendship and Cooperation. In this regard, President Xi Jinping and President Putin issued a joint statement on the extension of this treaty, which is already filled with new content.

Now our two countries are putting a lot of effort into the COVID-19 response. Our multifaceted cooperation is growing steadily, showing good results. In the first 10 months alone, bilateral trade reached $11.56 billion – that is an increase of 30.8 percent. This indicator alone convincingly reveals the enormous potential and broad prospects for our cooperation.

True, the pandemic situation gives us no cause for optimism: new strains continue to appear, and it is very difficult to predict how this virus will attack us next or whether it is going to get even worse. Moreover, the global economy continues to recover sluggishly. The unpredictability and instability of the global situation is, if anything, growing.

Russia and China are leading and at the same time growing economies, and in this regard, China is ready, together with our Russian partners, to intensify contacts, to improve coordination, to jointly reveal the cooperation potential, and increase the level of interaction. We are also ready to work together in the fight against COVID-19, to ensure the resilience of the global supply and production chains, to strengthen green growth, contribute to the sustainable recovery of the global economy, and play a bigger role in promoting peace and stability in the region and in the world.

I am delighted to welcome you to the 26th regular meeting of Russian and Chinese heads of government.

First of all, I would like to extend my warmest greetings to you and to all our Chinese friends on an important event – this year, the Chinese Communist Party marks its centenary. Our countries carefully preserve their common history. We sincerely wish you every success.

Today, Russian-Chinese relations, our comprehensive partnership and strategic cooperation, are at their highest level in centuries, and they continue to grow dynamically on the basis of the Treaty of Good Neighbourliness, Friendship and Cooperation. The regular meetings of heads of government play a significant role in this, as do five intergovernmental commissions, which also met during this difficult year despite the coronavirus. We will hear their co-chairs’ reports today.

The leaders of our countries, President Vladimir Putin and President Xi Jinping, have instructed the governments to consistently expand hands-on cooperation in all areas. We have already achieved good results, primarily, as you have just said, in mutual trade. In January-October, bilateral trade grew by 31 percent to $110 billion, which is a very significant amount.

By the end of 12 months, we expect to reach new record figures. We are determined to bring bilateral trade to $200 billion in the next three years, as the heads of states have instructed us.

Russian-Chinese relations have a special value because they cover all areas and opportunities for interaction. Our energy cooperation has become complex and truly strategic. The Power of Siberia gas pipeline is operating steadily.

The delivery of Russian liquefied natural gas to Chinese consumers is proceeding on schedule within the framework of the joint Yamal LNG project via the Northern Sea Route.

New achievements have been reported in peaceful nuclear projects. The construction of four reactors for the Russian-designed nuclear power plants has been launched in China with the participation of Russian professionals. Rosatom has interesting cooperation proposals. This is especially important in the context of the global climate agenda, considering green and safe nuclear power plants produce no greenhouse gas emissions.

Of course, I would like to say a few words about our humanitarian ties, which constitute the social basis of Russian-Chinese neighbourliness and are strengthening the traditions of friendship, which we will pass on to future generations.

We have held the successful China-Russia Year of Scientific and Technological Innovation. The programme included over a thousand joint events. Our scientists and researchers exchanged experience and developed useful contacts. Another important outcome of the cross-yeas was the decision on the participation of Chinese professionals in the Russian NICA mega-science project. It offers opportunities for unique experiments and will become the driver of our scientific and technical cooperation.

Colleagues, Russia-China cooperation is developing amid a complicated international situation. Regrettably, some of our foreign partners continue to take unfriendly actions towards us, using unfair competition and frequently violating the basic norms of the multilateral trade system. Both Russia and China have to deal with the challenge of illegal sanctions and political and economic pressure.

The best response in this situation will be rallying efforts in the interests of joint development based on the principles of equality, mutual trust and respect, as well as the alignment of the projects underway in the Eurasian Economic Union with China’s Belt and Road Initiative. This is important for strengthening connectivity in Eurasia, will help ensure the economic progress of Russia and China, and will create a reliable basis for implementing the idea of the Greater Eurasian Partnership proposed by President of Russia Vladimir Putin.

Mr Li Keqiang, colleagues, we have a busy agenda today. There are many strategic issues on it. I am sure that we will be able to coordinate practical solutions, which will give additional momentum to the further development of comprehensive and multifaceted cooperation between Russia and China.

Signed by: Prime Minister of the Russian Federation Mikhail Mishustin and Premier of the State Council of the People's Republic of China Li Keqiang

Signed by: First Deputy Prime Minister of the Russian Federation Andrei Belousov and Vice Premier of the State Council of the People's Republic of China Han Zheng

Signed by: Deputy Prime Minister of the Russian Federation Alexander Novak and Vice Premier of the State Council of the People's Republic of China Han Zheng

Signed by: Deputy Prime Minister of the Russian Federation Tatyana Golikova and Vice Premier of the State Council of the People’s Republic of China Sun Chunlan

Signed by: Deputy Prime Minister of the Russian Federation Dmitry Chernyshenko and Vice Premier of the State Council of the People's Republic of China Hu Chunhua

Signed by: Deputy Prime Minister of the Russian Federation – Presidential Plenipotentiary Envoy to the Far Eastern Federal District Yury Trutnev and Vice Premier of the State Council of the People's Republic of China Hu Chunhua