The fourth meeting of the organising committee for preparing the 25th World Energy Congress, which will be held in St Petersburg on 24-27 October 2022, was held in Moscow and chaired by Deputy Prime Minister and Chairman of the Presidium of the Russian National Committee of the World Energy Council Alexander Novak. 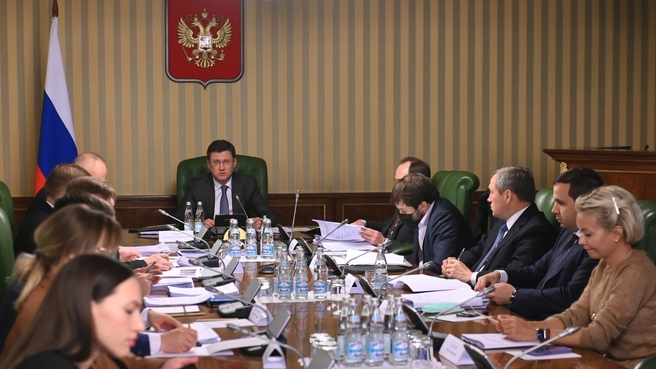 Alexander Novak opened the meeting by noting the teamwork of all the members of the organising committee for the World Energy Congress 2022: “Today, intensive work in all key areas of preparations is underway: the business, cultural and youth programmes of the future congress are being formed, and St Petersburg and the Expoforum site are being prepared for the World Energy Congress 2022 events. The invitation campaign is being successfully carried out, and work with Russian and foreign sponsors is going smoothly.”

“I am convinced that joint efforts will make it possible for us to achieve the ambitious goal of organising the largest and most memorable World Energy Congress in history,” he added.

Angela Wilkinson, Secretary General and CEO of the World Energy Council, noted in her welcoming address the importance of holding the World Energy Congress in St Petersburg and the role of this event in shaping the future of energy. She noted that for nearly a century the World Energy Congress has been setting the tone for the collective work of the global energy community and helping turn ideas and concepts into meaningful long-term projects, and that the council meetings, which are held every three years, bring together industry leaders and experts from around the world to jointly shape the future of energy.

According to Ms Wilkinson, the upcoming congress in St Petersburg will focus on the role of people and communities in driving change. In addition, it will show why humanising energy is the best way to ensure the shared prosperity of diverse and interconnected energy societies as a result of the energy transition. The congress will bring together a large number of energy companies and stakeholders from the conventional oil and gas industry and rising sectors of renewable and other new energy sources. The congress provides an excellent opportunity to showcase the most interesting and innovative achievements in the energy sector, and offers a unique platform for a professional dialogue that places the interests of people at the heart of the energy transition.

Presidential Advisor and Executive Secretary of the Organising Committee of the World Energy Congress 2022 Anton Kobyakov shared the details of preparations for the World Energy Congress 2022. “The Congress will showcase innovation-driven advances in energy and introduce the people behind them. It will offer a unique space for building new partnerships, making deals and exchanging information across all sectors and industries. An invitation campaign is in full swing with over 120 energy ministers and 140 heads of large foreign companies already invited. I’m sure that the discussions held by representatives of the next generation in energy, which will be held in St Petersburg, will seek to engage people in dialogue, helping them understand the needs of those who will be affected by the energy transition and to eliminate its social consequences, and will also serve to support joint innovations and the implementation of common ideas,” he said.

State Secretary and Deputy Minister of Culture Alla Manilova spoke about the cultural programme of the World Energy Congress 2022. “It is important to make sure that our hospitality is not doubted in the slightest,” she said. “Leading federal museums and theatres will offer a colourful range of events for guests to enjoy. St Petersburg will open the doors of its institutions to the participants as well.”

St Petersburg Governor Alexander Beglov closed the meeting of the organising committee for the 25th World Energy Congress. He talked about the city’s readiness to accommodate the leaders of the energy industry and the city’s experience of holding major international conventions and exhibitions.

The 25th World Energy Congress is dedicated to the 100th anniversary of the World Energy Council and will be held on 24-27 October 2022 in St Petersburg. The next meeting of the organising committee will take place in February 2022.