Main agenda item: preparing housing and utilities facilities and the energy sector for the autumn and winter season. 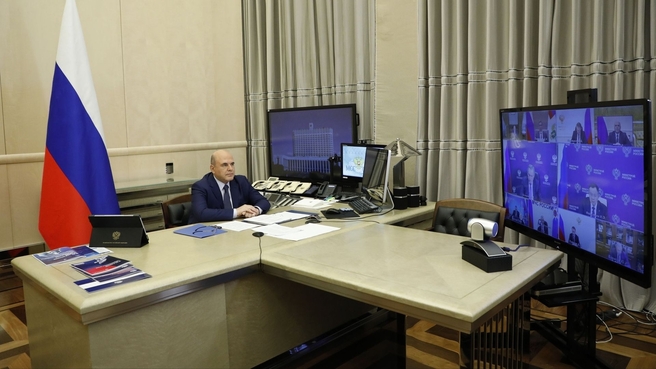 Today we will talk about the preparation of housing and utilities facilities and the energy sector for the autumn and winter, considering that the heating season has begun in all Russian regions.

The main task is to ensure that people have heat, electricity and a hot water supply. This is of vital necessity for our citizens. The President has said during one of the meetings that when preparing for the heating season it is important to monitor the developments in all the Russian regions so that we can react promptly and help them if and when necessary.

In the main, all regions are ready for the upcoming cold season, according to the ministries. This concerns housing and utilities facilities, including boiler rooms, water and heat supply systems. We have stored more fuel than is stipulated in the regulations.

However, the situation in the housing and utilities sector of the Jewish Autonomous Region remains tense. The Government will allocate nearly 900 million roubles to help the region prepare for the heating season.

These funds will be used to adjust the situation at the utilities facilities to the approved norms and to pay the utility bills of schools and other public sector establishments. There must be uninterrupted heat, water and power supply. This is of vital importance for people.

I would like to draw your attention to the following.

Some facilities must have uninterrupted electricity supply, primarily socially significant establishments such as hospitals.

Lives depend on a reliable electricity supply. But nobody is safe from accidents and power failures. Therefore, such establishments must have access to an autonomous emergency power supply, so that their personnel will not have to save every kilowatt they can. In the event of an emergency, every region must have equipment to deal with the consequences without delay, especially since we now have an additional opportunity to monitor housing and utilities thanks to the establishment of a special automated system last year.

And lastly, there is the matter of outstanding payments in the power and utility sectors. Measures must be taken to reduce the volume of debt in these sectors. The funding and modernisation of enterprises depend on this.

More details about the preparation of the energy, housing and utilities sectors will be provided by Energy Minister Nikolai Shulginov and Minister of Construction, Housing and Utilities Irek Faizullin.

There is one more issue on the agenda, which is about helping the victims of the natural calamities that descended on the Russian Far East last summer.

We have provided aid to people who lost their houses and property. We have also allocated funds for emergency recovery work to deal with the aftermath of floods and fires.

Today we will adopt decisions on damage compensation for agricultural producers.

The Government will allocate almost 1.4 billion roubles for these purposes, of which over 1 billion will be allocated to the Amur Region, which suffered the most damage in terms of agricultural crops, animal populations, infrastructure, and property. Other potential recipients are Yakutia, the Jewish Autonomous Region, as well as the Trans-Baikal and Khabarovsk territories.

This will provide support for 200 agricultural organisations and 3,000 local residents owning subsidiary farms. The allocations will enable the affected agricultural producers to repay the lease and interest on short-term favourable and investment loans.

The important thing is that every rouble be used effectively and strictly as intended. I would like to ask the Ministry of Agriculture to take this matter under its control.

Today, we will also consider three draft laws aimed at developing micro-sized enterprises. Pursuant to the President’s instructions, an experiment will be launched enabling these businesses to switch to a new taxation scheme – an automated and simplified tax system – that will considerably ease their interaction with the government.

The participants in the experiment will not have to draft and submit tax returns. Payments will be calculated automatically, based on cash register data and activity on accounts opened at authorised banks that will run payroll calculations on behalf of businesses.

Those eligible to make the transition to the new scheme are organisations and private entrepreneurs with an annual income not exceeding 60 million roubles and a workforce of up to five people. They will not have to visit any offices in order to take advantage of this opportunity because the formalities can be arranged via the taxpayer’s personal account.

The Kaluga Region and the Republic of Tatarstan have signalled readiness to participate in the experiment, which will last for about six years.

We hope that this approach will have a positive effect on micro-sized businesses and help reduce their overheads, enabling them to use resources that have been freed up for their own development.

Let us start the discussion.