35th session of the Foreign Investment Advisory Council in Russia 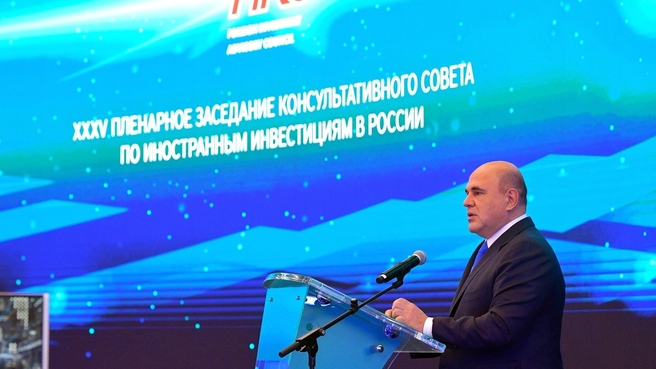 35th session of the Foreign Investment Advisory Council in Russia

I am happy to welcome all of you at the 35th session of the Foreign Investment Advisory Council (FIAC).

The world is gradually adapting to the new realities. It has largely overcome the shock caused by the arrival of the coronavirus. The global economy is growing again. Today, we can continue discussing all topical issues as openly and constructively as we did at the previous sessions of our council.

Russia is following the global trend of positive changes. We have also recovered our growth. The measures to support our people and businesses that the Government of the Russian Federation carried out on the President’s instructions have produced good results. The Ministry of Economic Development estimates that Russia’s GDP has increased by 4.7 percent in the eight months of this year. The economy has matched and even exceeded the pre-crisis level. Investment, housing construction, freight turnover and retail trade are growing at a confident pace. On the contrary, unemployment is rapidly declining.

We are resuming business activities. Investment demand has become a key driver in this respect. Investment in capital stock has increased. In the first half of the year, foreign investment amounted to about $11 billion.

We are seeing positive momentum in foreign trade as well. In January-August, trade went up by almost 40 percent. Importantly, export expansion played the main role in this regard.

The FIAC member companies are successfully developing projects that embrace many areas. Practically every year we record FDI growth in the Russian economy. It is currently about $185 billion. This is a positive trend.

This year, the capacities of plants and factories have been expanded in several regions of Russia. Tangible investment was made into food production.

Regarding green energy there was a bid last month,on investment projects to build facilities of solar, wind and hydro generation with total installed capacity of over 2.5 GW. Importantly, over half of this capacity will be produced by partnering with a FIAC member. Production of an important medication for treating a rare form of cancer has been localised. The medication is already being manufactured.

Further economic growth will be directly linked with the reset of the investment cycle. The President set this task as a national development goal for the next decade. We have updated national projects and adopted 42 new strategic initiatives with a view to reaching these goals. Each initiative creates potentially large and capital-intensive areas as well as new markets that open prospects for further developing our cooperation and create the conditions for launching new mutually beneficial projects.

We did not put on hold our efforts to improve the investment climate even in the difficult conditions of the past year. All of you know well that following our previous session the period for the government registration of medical products was reduced. The zero import duty of the EAEU’s uniform customs tariff on super absorbents was extended.

Investment instruments are being expanded. Last year, we created a special instrument – agreements on protecting and encouraging capital investment. This makes it possible to guarantee investors will have consistent conditions of doing business in our country for a long time. In about a year, such agreements were signed to the tune of some 1.3 trillion roubles.

This instrument has generated a lot of interest. Another 75 applications for a total investment of 2 trillion roubles are being currently reviewed.

These agreements imply major investment. However, we want to attract investment in medium- and small-sized projects which will be effective in one or several constituent entities of the Russian Federation. Regional agreements on protecting and promoting investment will be launched to this end. A corresponding investment standard is being developed. The best practices and incentive systems are being selected to improve the quality of interaction with investors and to speed up the attraction of funds to the constituent entities of the Russian Federation. By the end of this year, it is planned to be piloted in 11 regions.

In parallel, a mechanism for transforming the business climate is operating. This year, export and intellectual property roadmaps were updated, and a new map to improve the regulatory framework in industrial construction was adopted in September.

Many of your companies operate in the Far East. In recent years, we have been focusing on this region and the Arctic. I think you will agree that they have a lot to offer. Cooperation in this area will bring considerable dividends to the participants of new joint projects. The Far Eastern concession mechanism, among other things, was launched in the early autumn. Favourable terms have been created to accelerate socioeconomic development.

By expanding your business in Russia, you gain access to the large EAEU common market with its over 180 million consumers. If you add the EAEU observer states, that number goes to over 200 million. By ensuring freedom of movement of goods, services, investment and labour and promoting promising digital initiatives, we create new opportunities for joint projects in various fields, including on a cross-border basis, that make use of our states’ competitive advantages.

Even though Russia is a leader in traditional energy, we are closely monitoring new industries as they develop. Transitioning to green energy is more than just another issue for Russia.

Already now, the Government is deeply engaged in developing the regulatory framework and financing system for launching climate projects, both purely green projects in the field of solar and wind energy and hydroelectric power generation, and transitional projects involving associated petroleum gas, coal mine methane and coal where technology matters if we want to protect the environment.

A federal law on greenhouse gas emissions has been adopted. It is a foundational document for carbon regulation in Russia. The infrastructure for the Russian carbon market is also being developed. There are 17 regulatory acts and two draft laws in the works now which will make it possible to launch a system for the carbon unit trading system and climate projects.

We are restructuring entire regions and industries for a low-carbon future, and, in some cases, we end up meeting even more ambitious goals such as carbon neutrality. The President set a specific deadline which is by 2060. This has great potential to develop innovative technology and spawn new industries. Plans have been drafted to expand electric transport and hydrogen and nuclear energy.

Many items on the climate agenda concern global cooperation, such as, for example, cross-border regulation, mutual recognition of carbon units by countries and certificates of equivalence for organic produce. Importantly, the decisions should not be lop-sided or lead to restrictive measures.

So, I want the council members to initiate these discussions with foreign regulators which, I think, is in our common interest.

Considering the importance of this item for the Russian and international agenda, I propose beginning our meeting today with the global energy transition.

As is customary, my deputies and relevant ministers are here with us today. They will clarify the situation concerning issues that may be of interest to you.