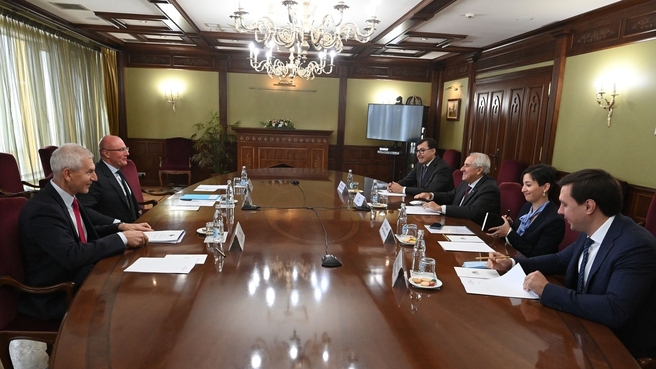 Ary Graca (FIVB President): “It was an honour and privilege for me to meet with Deputy Prime Minister of Russia Dmitry Chernyshenko and Minister of Sport Oleg Matytsin. We had a detailed conversation on the fundamental principles that will guide the development of volleyball in Russia so that it can benefit from the championship’s legacy and inspire more people to take up this sport.

We also explored ways to channel the energy and momentum generated by international volleyball tournaments to increase participation at all levels.”

Dmitry Chernyshenko: “Volleyball is Russia’s second most popular sport. Russian clubs have built quite a solid track record, including an all-Russian final at the CEV Cup, with Moscow’s Dynamo emerging as the winner.

Together with the FIVB President, we assessed the potential volleyball has in Russia and how we can take it to an even higher level with improvements at both the amateur and professional levels.

Next year, 10 Russian cities will be hosting the World Championships. This tournament will create a new generation of volleyball fans in Russia, while also helping develop a sport that has gained a solid footing in our country.”

The meeting was devoted to the countries’ cooperation within the Caspian Region as well as the supply and transit of Russian energy resources.
20 October 2021 Meeting of the Trilateral Working Group co-chaired by deputy prime ministers of Azerbaijan, Armenia and Russia Deputy Prime Minister of the Republic of Azerbaijan Shahin Mustafayev, Deputy Prime Minister of the Republic of Armenia Mher Grigoryan and Deputy Prime Minister of the Russian Federation Alexei Overchuk chaired a meeting of the Trilateral Working Group.
20 October 2021 Mikhail Mishustin’s telephone conversation with Prime Minister of Kazakhstan Askar Mamin
20 October 2021 Dmitry Chernyshenko: 600 Russian athletes training for 2022 Winter Olympics in Beijing
19 October 2021 Dmitry Chernyshenko spoke by phone with Zeev Elkin Deputy Prime Minister Dmitry Chernyshenko spoke by phone with Minister of Jerusalem Affairs and Heritage, Minister of Construction and Housing, Minister for Liaison Between the Knesset and Government Zeev Elkin.
19 October 2021 Meeting of the Presidium of the Coordination Council to control the incidence of the novel coronavirus infection in the Russian Federation Mikhail Mishustin: “There has been a significant increase in the infection rate and the burden faced by medical institutions is growing. It is essential that we do our outmost to make sure that the situation does not reach a critical point, and stop the infection from spreading further. We are talking about the health of our people here.”
19 October 2021 Alexei Overchuk addressed the 8th Russian-Armenian Interregional Forum The Russian-Armenian interregional forums have been held since 2011 to identify promising areas of cooperation and establish new ties between Russia and Armenia at the regional level. Deputy Prime Minister Alexei Overchuk addressed the forum via videoconference.
18 October 2021 35th session of the Foreign Investment Advisory Council in Russia
17 October 2021 Mikhail Mishustin congratulates Russian high schoolers on winning Internaional Mathematical Olympiad
14 October 2021 Government meeting