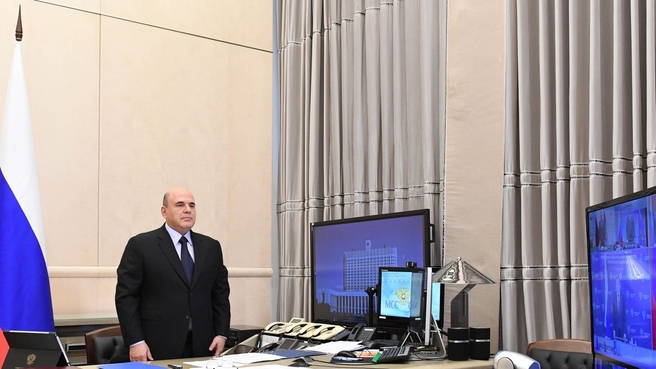 Yesterday our colleague, Minister of Emergencies Yevgeny Zinichev passed away tragically while on duty. This is a grave loss for his family and everyone who had a chance to work with him or just meet him.

A true officer, loyal to his job, he died saving another person. Until the last second of his life, he served as an example of valour and determination.

I would like to convey the most sincere condolences to the family and friends of Mr Zinichev.

Let us honour his memory with a minute’s silence.

Colleagues, first of all I would like to say a few words about the implementation of the instructions given by the President during the congress of the United Russia party.

The government has extended the moratorium on inspections of small businesses.

A resolution has been signed for the Government to extend the moratorium on scheduled inspections of small businesses for next year.

This measure has been in force in Russia for several years. Thanks to it, over 120,000 inspections were removed from the annual schedule last year, which made it possible to significantly lower the administrative burden on small enterprises, support them during the difficult period of adaptation to the conditions of the spread of coronavirus and help restore business processes.

Now the moratorium will be applied to about 100,000 small businesses. Of course, at the same time there will be a number of exceptions. It will not be extended to inspections of facilities that could pose danger to people’s lives: those classified as extremely high and high risk, enterprises operating with licences and those using nuclear energy. The moratorium will relieve businesses of an unnecessary workload and a certain level of pressure and make it possible for companies to avoid being distracted by inspections and to recover faster.

Today the government agenda includes the topic of helping people in the Amur Region who suffered from the flood this summer. Their property was seriously damaged. Many were left homeless.

During my working trip to the Far East, in line with the President’s instructions we had a meeting on relieving emergencies in this federal district. We made several decisions: first of all, in relation to the provision of social support to people as well as how to protect them from future disasters and help restore damaged property and infrastructure.

Today we will allocate over two billion roubles to the Amur Region. Most of it, 1.3 billion roubles, will be allocated to provide financial aid to those who were left homeless because of the flood. Almost another 700 million will be transferred to the regional budget for compensatory payments related to the full or partial loss of property.

I am asking you to carefully monitor the situation so that people receive the money promptly and are not left homeless.