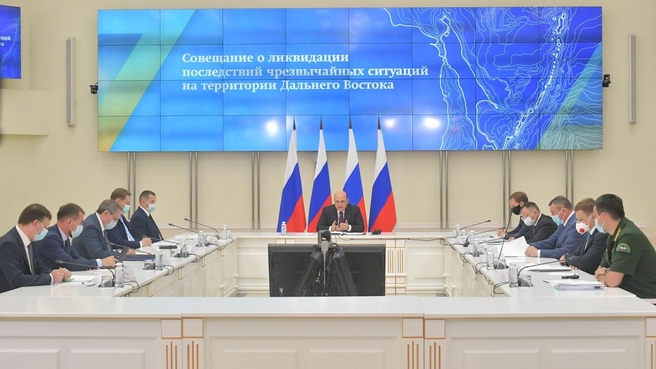 Mikhail Mishustin: Good afternoon, colleagues. Good morning to all those who have joined us from Moscow and other regions.

We are holding this meeting on the President’s instruction. We will talk about our actions in emergencies and efforts to counter fires and floods. This year, they have taken place in many parts of the world. We are seeing this and hearing about them in the news. It is possible to predict natural disasters but not to avoid them. That said, it is very important to protect people.

It is calm now on Sakhalin Island, albeit such problems are not rare in the Far East. Therefore, we decided not to delay our discussion and to hold a meeting at the first opportunity.

Natural disasters do significant economic damage. Literally, last week, on 23 July, a branch of the Trans-Siberian Railway was washed out and a bridge destroyed in the Trans-Baikal area.

Over two weeks ago, there were serious floods in four regions of the Far East – the Trans-Baikal Territory, the Khabarovsk Territory, the Amur Region and the Jewish Autonomous Region. They affected dozens of residential areas and hundreds of houses, many of which had garden plots. Regrettably, thousands of people have been identified as those affected. About 800 km of transport infrastructure, bridges and roads were disrupted. Over 40,000 hectares of farmland sustained heavy damage.

Search-and-rescue and social services continue working. People have received the assistance they need. Now the material damage is being assessed with a view to paying compensation. I understand that precise calculations are important, but I would still ask all services and regional leaders to try to expedite this process. Reduce the red tape so that people who have already lost much won’t have to rush around for documents and waste their time in endless queues.

Another important topic we will discuss at today’s meeting is fighting wildfires. 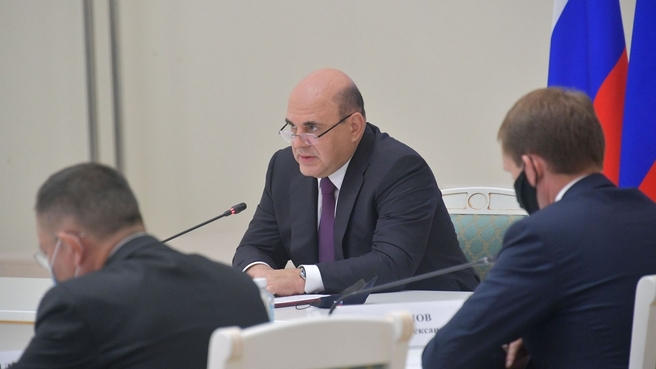 The situation in the Republic of Sakha (Yakutia) remains complicated. The Government has already allocated an additional almost 400 million roubles for firefighting. In all, we earmarked about 3 billion roubles for this purpose this year.

We must step up the use of aircraft equipment in extinguishing fires in Yakutia. It is necessary to always have enough fuel for aircraft and fire trucks.

I would like to ask regional governors to do all they can to help disaster victims. I would also like to ask you to personally monitor this task.

We have to do a lot and as quickly as possible. As you understand, in such situations the main thing is to act promptly because human lives are at stake.

My deputy, Yury Trutnev, will deal with this issue, in part, as a member of the Government Commission on Disaster Relief in the Far East. Its lineup has already been approved.

Now I would like to say a few words about the priorities on which we must focus.

First, it is necessary to pay compensation to people whose houses or apartments were damaged or deemed uninhabitable. This money will be spent on repairs and the purchase or construction of new housing.

Second, we must rebuild the infrastructure, roads, bridges and utility networks.

We must not forget about emergency prevention measures. It is necessary to speed up the construction of water control facilities in the Jewish Autonomous Region, as well as in the Khabarovsk, Trans-Baikal and Primorye territories. About half of them, some 27 km, have already been completed, and this made it possible to protect many people from flooding and prevent heavy damage to the infrastructure of the regions. Over 30 km still have to be built. It is important for people to feel safe and not worry about future misfortunes.

Of course, it is necessary to provide necessary support for a number of sectors, including agribusiness, and residents of rural areas who have lost their garden harvests. We must provide the funds for helping those affected in this regard as well.

Representatives of the Far Eastern Federal District where these disasters took place are also present at our meeting via videoconference. I would like to hear an update on the work to restore the destroyed section of the Trans-Siberian Railway and fulfil the President’s instruction.

Let us move to our discussion.

Mr Zinichev will give the main report on flood relief efforts in the Far East and assistance for the victims.