Mikhail Mishustin: “Speaking on the Direct Line, the President issued an instruction that each Deputy Prime Minister supervise one of the country’s federal districts. This task should aim to implement the national goals in the districts under your control, so that the life of every citizen would improve.” 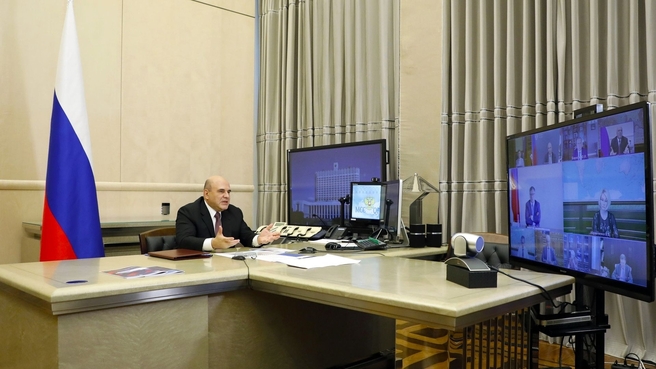 Colleagues, we are first of all going to discuss your new duties. Speaking on the Direct Line, the President issued an instruction that each Deputy Prime Minister supervise one of the country’s federal districts.

Each of you working on the territory under your control will be responsible for its social development, will monitor the efficiency of budget allocations and will see whether such spending meets people’s requirements and will monitor compliance with budgetary discipline.

It is also necessary to pay close attention to facilitating the economic growth of a district, and improving its investment climate as well as supporting small and medium-sized businesses and creating jobs. All these tasks should be accomplished in every district and in all its regions.

We will coordinate your actions within the framework of the Government Commission for Regional Development, headed by Marat Khusnullin.

This will make it possible to streamline effective cooperation between the federal districts, and this is particularly important, due to the need for joint work to implement large-scale regional inter-sectoral infrastructure projects. The President also noted their need.

Here is how the duties will be allotted:

The relevant decisions on appointing officials in charge of federal districts were made with due consideration for their professional experience, knowledge and range of intra-Government tasks.

Colleagues, please start fulfilling your new duties. I would just like to stress that this work should aim to implement the national goals in the districts under your control, to facilitate their social development and economic growth, so that the life of every citizen can change for the better.

Now let's discuss one more important decision that concerns domestic tourism development. The Government has approved rules for granting subsidies to airlines to compensate for reduced fares for families with children. This year's federal budget provided 1.35 billion roubles for this.

As many as 46 interregional routes have been selected. They directly connect almost all major Russian cities from Kaliningrad to Yuzhno-Sakhalinsk. It’s necessary to choose one of the subsidised destinations and make a single family booking.

Due to the Government's decision, tens of thousands of Russians will be entitled to low cost flights. Even families with a modest income will be able to fly in comfort to their destination for sightseeing, or to visit relatives and grandparents living in other cities.

It is the holiday season now. I ask the Ministry of Transport to organise the work as quickly as possible – to hold a competition among airlines to open the special rate tickets sales as soon as possible, so that people can take advantage of preferential family air travel as early as August.

Next question. We will send 310 million roubles to the Kulakov National Research Centre for Obstetrics, Gynaecology and Perinatology to purchase the Da Vinci surgical robotic system. We made this decision when we visited the centre recently.

The centre needs expensive equipment for ultra-precise and complex operations. The use of a robotic assistant reduces the risk of complications for expectant mothers. We need to make this high-tech help available to even more women. Indeed, the Kulakov Centre admits patients from all over the country.

We will continue updating equipment in maternity hospitals, hospitals and other healthcare facilities. This work is among the Government’s highest priorities, because every such decision affects people’s lives and health.

Let us move on to the next point. The Government will additionally allocate more than one billion roubles to finalise the construction of an ice-resistant Arctic platform. Not accidentally, it is named North Pole. This self-propelled platform can be installed both on ice and in the water, embodying as it does a radically new approach to long-term scientific research in the North Pole area. So far, all Polar research stations are based on ice. But the thickness of the ice cover has declined considerably over the past two decades, which for a considerable time has made it impossible to organise expeditions lasting more than a year.

Apart from that, more people will be able to work on this platform than at traditional drifting stations. And, of course, there are additional possibilities for installing research equipment. Research results are important as the basis for weather forecasts and help us to understand global climate change processes. They are also instrumental in the drafting and implementation of plans to develop the Arctic and operate the Northern Sea Route.

I ask the Federal Service for Hydrometeorology and Environmental Monitoring (Roshydromet) to supervise this work. It is important to start contractor sea trials of the new platform as early as next year.

Turning now to industry-specific support issues, the Government is adjusting the rules regulating subsidies to oil-crop farmers. Since last year, the recipients of this state support have been able to offset part of their production costs. We are retaining these subsidies and enabling producers to receive a greater sum, if they are more active in using domestically-grown seeds. I am referring to crops that have been entered on the state register of selection achievements.

This new support measure will be available not only to agricultural producers or agro-processing businesses, but also to universities and research organisations engaged in investigations in this field.  We hope that the introduction of the achievements of agricultural science will help to boost production, affect the quality of products, and expand import substitution in the seed industry. There is high demand for sunflower, soya, rapeseed and derivative products – oil and fodder – both at home and elsewhere.