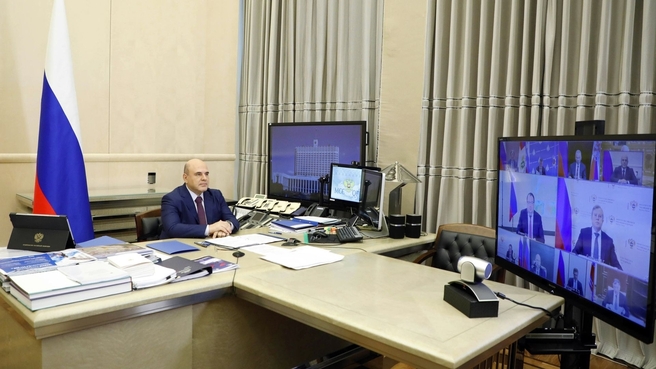 Let us begin with discussing measures that must be taken to ensure a more effective development of the regions. We will cover the support instruments for infrastructure projects, the importance of which the President mentioned in his Address to the Federal Assembly. This will allow us to increase the construction of residential blocks of flats, hospitals, schools, sports facilities and also motorways, as well as upgrade our housing and utilities sector. Taken together, this will provide a fresh impetus to the economic development of the constituent entities of the Russian Federation.

We will finance these projects through infrastructure budgetary loans and infrastructure bonds. Considerable allocations have been approved for this purpose. During the next two years, the regions will receive some 500 billion roubles in the form of budgetary loans, to be issued for at least 15 years at no more than a 3 percent interest rate. In addition to this, 150 billion roubles will be attracted during the next four years through bonds. This is to allow us to guarantee the provision of easy infrastructure loans at a 4 percent interest rate for up to 15 years, and for up to 30 years for some categories of infrastructure projects.

We already have the necessary legal framework for this, and we have already launched pilot projects to test the mechanism of interaction with the constituent entities. We plan to launch construction funded by infrastructure bonds in six regions: the Lipetsk, Sakhalin, Tula, Tyumen, Chelyabinsk and Sverdlovsk regions. We hope that these measures will help us to boost production, enhance the investment attractiveness of the regions, support businesses and create more new jobs. Ultimately, the quality of people’s life will be improved.

We will also provide government support for balancing the budgets of the constituent entities of the Russian Federation. Overall, 100 billion roubles are to be allocated from the federal budget this year alone. The Government will transfer the first tranche of 50 billion roubles today. These funds will be provided to 55 regions and must reach the destinations as soon as possible.

And now I would like to say a few words about social support for families with children. Acting in accordance with the Presidential instructions, the Government will allocate over 200 billion roubles today for one-off payments in the amount of 10,000 roubles for schoolchildren aged between six and 18, including those who will start school this year. In addition to this, the same sums will be transferred to children with disabilities aged above 18 who have not finished school yet.

It is notable that parents can submit applications for these funds as of today and up until 1 November, and the first transfers will be made as soon as in mid-August, so that parents will be able to use them to buy whatever they need for school.

Mr Shadayev (Maksut Shadayev, Minister of Digital Development, Communications and Mass Media), tell us, please, about the preparations for accepting these applications. I know that you have already launched the system in the test mode on the Government Services Portal. So, how many people have already submitted their applications?

First of all, just a few words about the new technology. The Ministry of Digital Development, Communications and Mass Media and the Ministry of Labour and Social Protection tried the mechanism of proactive notifications for the first time as part of these payments.

Users of the Government Services websites subject to these payments have been sent a link to the ready filled-out application form. They had to check that the data is correct and with simply a click, send the application off to the Pension Fund.

Today over eight million parents have already applied for payments for more than 11 million children this way. This is approximately two-thirds of all families who are entitled to this payment. All this information has already been transferred to the Pension Fund for processing.

As you have mentioned, Mr Mishustin, for those who are new to the Government Services website and have not received such a notification, there is a form there to apply, it is open and they can use it.

And another thing. The Government Services mobile application has taken first place at the top of free applications for iOS and Android. It became the most popular free app.

It is necessary for the service to function smoothly. This is an important step towards introducing mechanisms for proactive notification and the formation of a “social treasury” system. It is necessary to continue this work.

The agenda also includes a bill that will ensure the procedure for the return of pension savings to people who lost their income due to the abuse of insurers.

Today any citizen can transfer their savings from one pension fund to another. But with an early transition – earlier than five years – they will lose the interest, especially when this happens without the owner being aware, as a result of illegal actions of agents who work for such pension funds.

Now the victims of such actions will not only be able to challenge the insurers’ actions in court, but also obtain compensation for their lost income. The bill envisages the procedure for transferring funds and interest for their unlawful use.

We hope these measures will help people to protect their future pensions.

Now to the next item. We will review the amendments to the fire safety law that call for delimiting the responsibilities of fire safety divisions and which also authorise the Ministry for Civil Defence, Emergencies and Disaster Relief to issue the required documents to people whose housing and property have been damaged by fires. The faster they receive these documents, the faster they will be able to reinstate their rights and to obtain social and insurance payments and other compensations. The Emergencies Ministry’s expanded powers will make it possible to assist affected people more quickly.

And now, let’s discuss matters regarding the development of the transport infrastructure. The President pointed out the need to establish a ramified nationwide network of basic roads, while opening a section of the Central Ring Road in the Moscow Region.

We will allocate over 53 billion roubles for successfully implementing the projects in this field. Of this amount, over 40 billion will finance the earlier-than-planned construction of the  M-12 motorway that will link Moscow with Nizhny Novgorod and Kazan. It will become part of a transport corridor between European Russia and China.

We will also transfer over 11 billion roubles to 20 of the Russian regions to build regional, inter-municipal and local roads, including a section of the Yekaterinburg Ring Road. We discussed its construction with the head of the Sverdlovsk Region during our trip to the region last week.

A few words about another important construction project. We will set aside three billion roubles for building the first stage of a  latitudinal motorway in St Petersburg. This sum will make it possible to complete the Vitebsk interchange that will link the West High-Speed Diameter with the new motorway and help to considerably reduce traffic jams in the city’s historical section. The people of St Petersburg and visitors will appreciate this.

Here is another subject. We will provide the Krasnoyarsk Territory with over two billion roubles for implementing various measures under the Clean Air project of the Ecology national project, in order to reduce toxic motor vehicle emissions. The money will be used to buy modern environmentally friendly vehicles, namely, 50 Russian-made trolleybuses and 25 trams. We now have some good models, and I have seen some of them, while visiting enterprises in the Russian regions.

Now, this matter is linked with environmental protection. The Government continues to remove sunken ships from water bodies. At our earlier meeting, Government members approved the ratification of an international convention in this field. Today, we will discuss the relevant legislative package, and we will determine a procedure for removing sunken ships and specific deadlines.

Moreover, we now require ship-owners to obtain insurance policies in the event of such operations. These documents must be mandatory, just like car insurance coverage for those buying cars because per-ship salvage costs may exceed 20 million roubles. Over 600 sunken ships have been located in water bodies of the Far Eastern Federal District.

Some irresponsible owners simply abandon their sunken vessels that pollute the environment and threaten the safety and health of people living nearby or vacationing on the coast.

To prevent such situations from happening, it has now been decided to hold ship-owners responsible for deliberately scuttling their vessels and for a refusal to remove them. This measure is unprecedented. Considering the high salvage and disposal costs, we stipulate federal budget subsidies for the regions that will use them to remove abandoned ships.

The new legislation will help the regions to start removing rusty ships from harbours and will reduce the environmental impact.