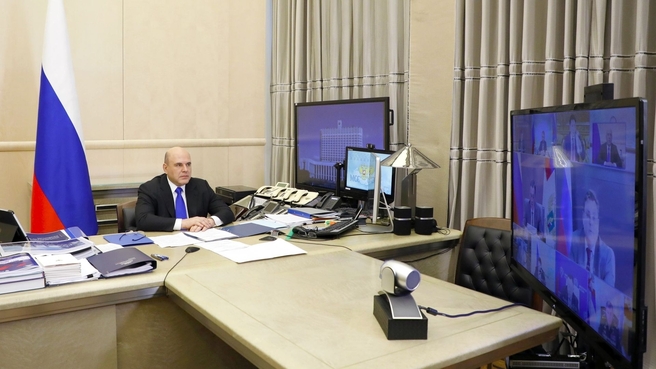 Before we start discussing the issues on our agenda today, I would like to say a few words about the decisions that have already been adopted.

A Government directive has been signed to allocate nearly 18 billion roubles to purchase medicines for children affected by rare and serious diseases. These funds will be transferred to the Circle of Kindness foundation, which has been set up at the President’s initiative, and will promptly purchase the required medicines and deliver them to the small patients. It will be the third tranche. Over a thousand children have received expensive medication with support from the foundation, which was established approximately six months ago. These efforts will continue.

Another Government directive stipulates the allocation of over 500 million roubles for the construction and renovation of vital infrastructure facilities in the Sheregesh sports and tourism complex. It is included in the programme for socioeconomic development in Kuzbass, which has been approved in accordance with Presidential instructions. During a working visit to Siberia in March, we had an in-depth discussion with business representatives on problems that are hindering the quality development of Sheregesh. Regrettably, the tourism infrastructure is underdeveloped there, even though the region has huge potential.

Overall, the modernisation programme of the complex will last four years. It is designed to create comfortable conditions for people who are planning their recreation in Russia, as well as to create new jobs, including in the related industries.

Let’s move on to our agenda. As per the President’s proposal, the Government will allocate an additional 30 billion roubles for repairing over 2,000 kilometres of roads in 84 Russian regions.

The road network’s state has great significance for the development of every economic sector. These funds will make it possible to upgrade regional, municipal and local roads. All of them must meet modern standards, and they must be safe for drivers and pedestrians.

I would like to ask you to transfer the funds to the regions as quickly as possible, so that they can start working in the next few months, just as the President instructed.

This is not the only tranche in 2021. Earlier, we allocated 100 billion roubles for road construction projects that are being implemented ahead of plan. We will continue to work on developing the road network in the future, and we will build new roads and repair the existing ones.

Today, we will also discuss an amendment to legislation on indexing payments deducted under court verdicts.

Court trials often last a long time. Months and even years may pass after an application is filed until the court issues a verdict and the payments are made. Over that period, the value of the compensation being claimed by the plaintiff may change considerably, and this also applies to sums that should be paid by the defendant. From now on, they will be indexed from the day of the court verdict.

This will make it possible to completely reimburse the plaintiff for the delayed payments, and debtors will be motivated to fulfil their obligations on time.