The agenda of the meeting includes Belarusian oil products’ supplies through Russian seaports, easing the conditions for the regions to get treasury loans, adjusting the state programme for the development of industry, the new state Arctic development programme, and major repairs of blocks of flats. 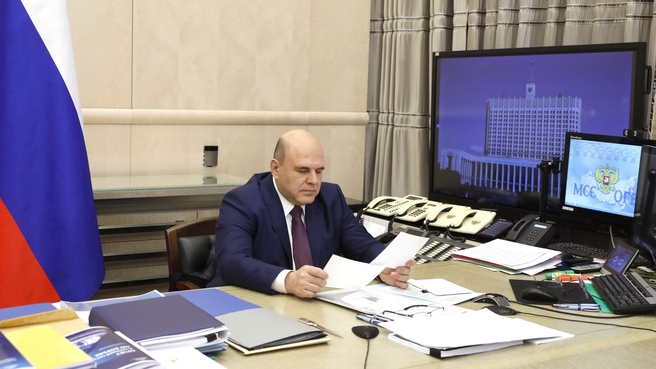 Last week, the President instructed the Government to work out additional support measures for the regions. We need to help them strengthen their financial systems and attract funding, including investment in infrastructure, and ultimately, to create conditions for achieving the national development goals.

We can propose one quick solution right now. We plan to ease the conditions for getting treasury loans. This will allow the regions to forgo the limitation on public debt this year, and potentially, more regions of the Russian Federation will be able to obtain short budget loans.

They will be able to resolve a number of current matters they had not had sufficient  resources for, and thereby strengthen the sustainability of their budgets with an increased level of public debt, support the people and the regional economies, and create incentives for higher activity in the future. It is certainly vital to continue to carefully monitor the situation with regional finances to maintain the stability of the budget system.

Now let us speak about important decisions regarding the industrial policy. The Government has specified the state industrial development programme targets. The programme’s term has been extended up until 2030 so that it can ensure the achievement of the national development goals set by the President for a period of the next ten years.

The planned values of some indexes were adjusted with due account of the industrial development trends as well as for the achievement of the goal to be sought: an increase in the exports of non-primary goods by not less than 70 percent compared to the last year indexes.

A special emphasis in the new programme was made on the support measures for industrial and industrial technology parks. We will increase the scope of commissioned industrial zones with the entire infrastructure. And if formerly their key indicators were aimed at the numerical growth of technology parks, now we are after the amount of non-budget investments and the output of industrial products.

Thanks to a broader horizon of strategic planning for the next decade, industrial enterprises will be able to plan their activities more efficiently. This will give more opportunities for the implementation of major investment projects with long payback periods. We expect it to promote the establishment of new high technology production facilities, greater competitiveness of our industrial goods and their increased exports.

It is important that the regions create new points of economic growth. And it means that it will be easier for the people to find a decent job and their standards of living will be higher.

The Government also approved the rules of providing subsidies to the National Research Competence Centre to counteract illegal trafficking of industrial products. The volume of funds will directly depend on the completion of the tasks in this field, first of all, when conducting applied research and preparing quality forecasts of the developments on the gray markets.

All of these measures will improve the efficiency of developing ways to fight counterfeiting.

Following the instruction of the President, the Government has approved the new state programme to develop the Arctic region for the next four years. Within the next three years, some 15 billion roubles will be allocated for this purpose, with 3.5 billion roubles being allocated this year alone. The programme is designed to ensure the sustainable development of the region, create tens of thousands of jobs and increase people’s incomes, as well as provide support to the businesses in the implementation of promising projects and to attract investors and skilled experts to the Arctic regions. In addition to this, it will allow for attracting private capital that will exceed budget allocations many times over. At the same time, it is crucially important to improve the quality of life and to preserve the traditions of the small indigenous peoples of the North, Siberia and the Far East who live in the Russian Arctic zone. The adopted state programme will help to coordinate the efforts of the government, businesses and society in the implementation of major economically important projects.

Now then, let us now discuss a topic that is important for all residents of blocks of flats. We have absolutely millions of such people throughout Russia.

The government is adjusting the procedures for attracting contractors for major repairs of such structures. People have to part with a lot of money for these purposes. And they have a right to know who is going to carry out the repairs that their money has gone towards and how. Therefore, the procedure for selecting contractors should be transparent in order to ensure the involvement of bona fide companies with sufficient experience and properly qualified workers.

Here’s an example. The new requirement for a contractor who repairs lifts, is that the workers responsible for installation and startup procedures must have qualifications in accordance with professional standards.

At the same time, we accommodated businesses’ needs and reduced the digital auction period from 20 to seven days for a number of projects. As the experience of the regions shows, this time is quite sufficient for a preliminary selection of contractors.

The works and services on these projects have to be carried out expertly and on time. We must continue to carefully monitor the situation in this field, which is a sensitive matter for residents of such buildings.

And one more important question. At the beginning of this year, the Government, on the instructions of the President, worked out and signed an intergovernmental agreement on the supply of Belarusian oil products through Russian seaports. This document will remain valid for the next three years and will automatically be renewed at the end of the term. During this time, almost 10 million tonnes of Belarusian oil products should be transported.

The work began a month ago; more than 220,000 tonnes have already been shipped through our seaports. It is almost a quarter above the planned volume. According to forecasts, the project targets will also be significantly exceeded in April, at least by 100,000 tonnes, which is a good pace.

It is already more than an export supply chain within the Union State; it is a whole new international transport corridor we have created.

I would like to ask Minister of Transport Vitaly Savelyev to report in more detail on the transfer of Belarusian oil products.

On 5 March 2021, Mozyr Oil Refinery in the Republic of Belarus shipped over 5,000 tonnes of Belarusian petroleum for transfer at the Portenergo terminal in the Ust-Luga sea port. Subsequently, on 6 March, 3,600 tonnes of fuel oil were shipped. The cargo proceeded for transfer to the St Petersburg Oil Terminal in the St Petersburg Sea Port. This is how a project that is important for the economy of our two countries, started. Two major northwestern ports of Russia served as the essential links of a new international transport corridor, as you mentioned, Mr Mishustin.

For the purpose of fulfilling the agreements between the economic entities of the two countries, corresponding agreements were signed, with Federal Freight Company, a subsidiary of Russian Railways, acting as the railway operator. This company’s public status served as a solid foundation for performing agreements and guaranteeing the required quality of shipments.

Mr Mishustin, this agreement became possible thanks to creating more advantageous and reliable logistic chains for cargo shippers, compared to Baltic ports. The fact that since April, the specified amount will be monthly increased by 27,000 of petroleum supplied from Belarus and produced from Azerbaijani oil, is serious confirmation of this.

The Russian Ministry of Transport is currently discussing with its Belarusian colleagues the possibility of redirecting a wider range of export cargo through Russian ports. We have received a proposal and the conditions from our colleagues which we are thoroughly reviewing right now.

Of course, this work must continue. It is extremely important to ensure the quality and expedience of shipments. This means strengthening our economic links, loading our transport infrastructure and eventually building common energy markets.

We should more actively use and multiply the competitive advantages of Russia and Belarus.