The Prime Minister addressed a plenary discussion on Russia’s Transport: Speed, Convenience and Efficiency, at the 14th International Forum and Exhibition Transport of Russia. He also presented state awards to the transport sector’s employees. 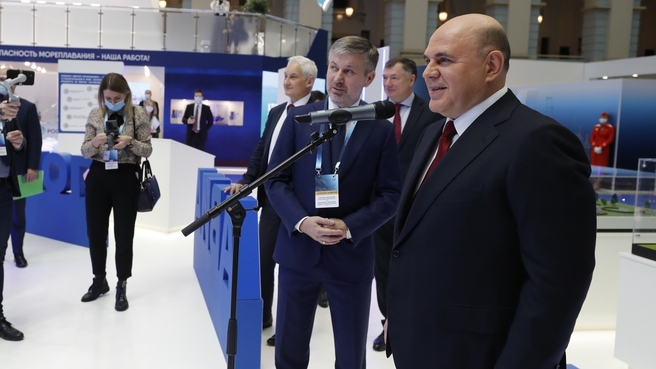 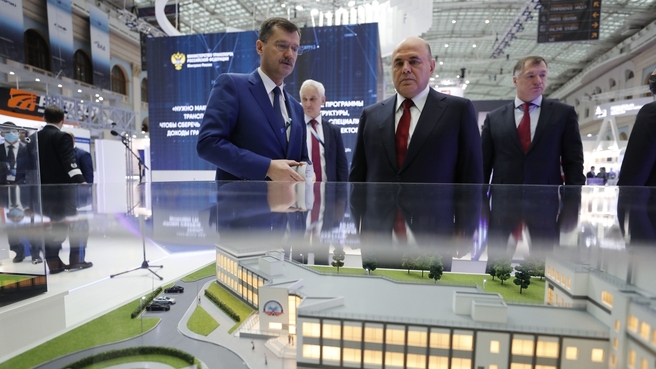 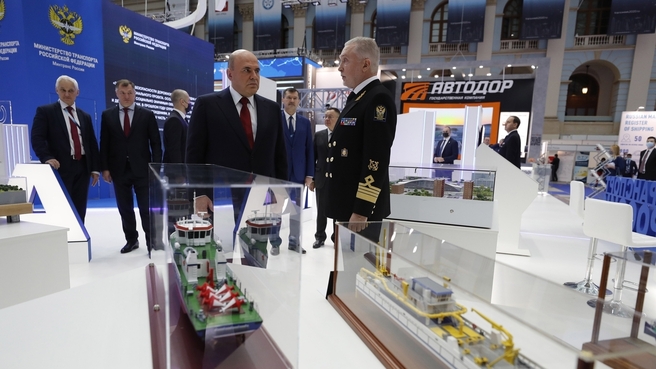 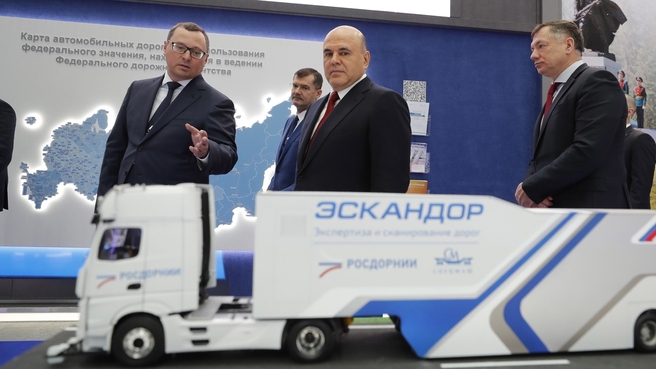 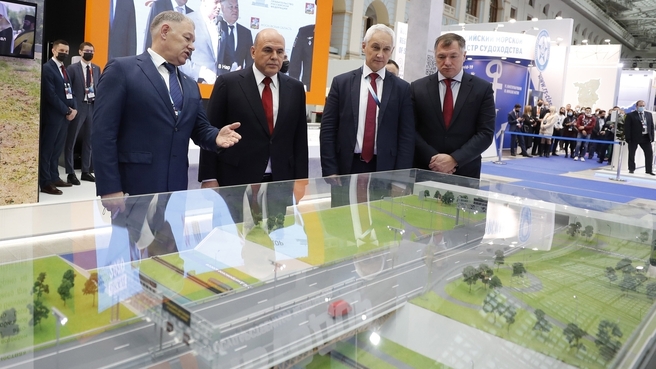 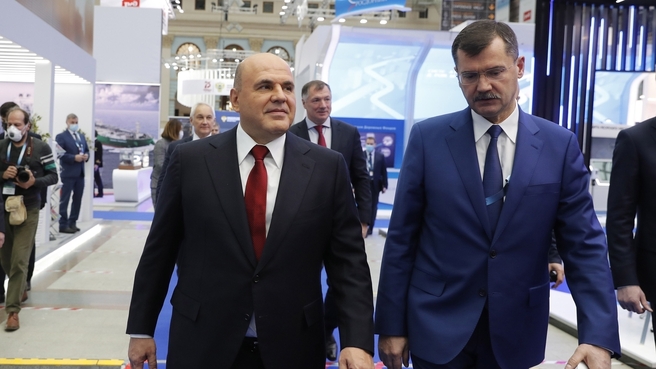 Viewing the Transport of Russia exhibition. With Alexander Neradko, Acting Minister of Transport, Head of the Federal Agency for Air Transport 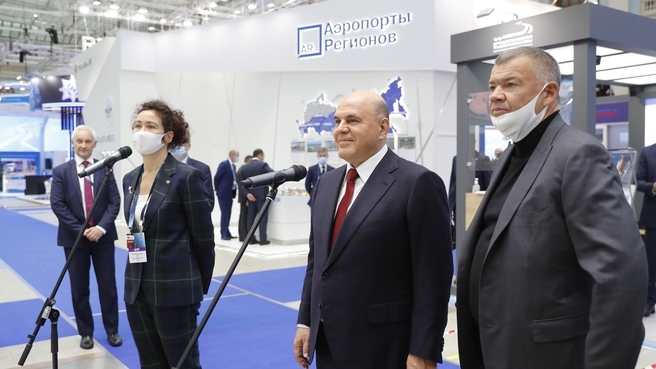 Visiting the Transport of Russia exhibition 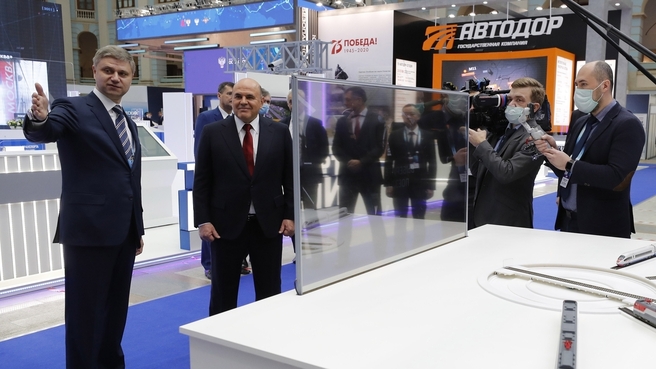 Viewing the Transport of Russia exhibition. With Oleg Belozerov, Chief Executive Officer - Chairman of the Executive Board, Russian Railways 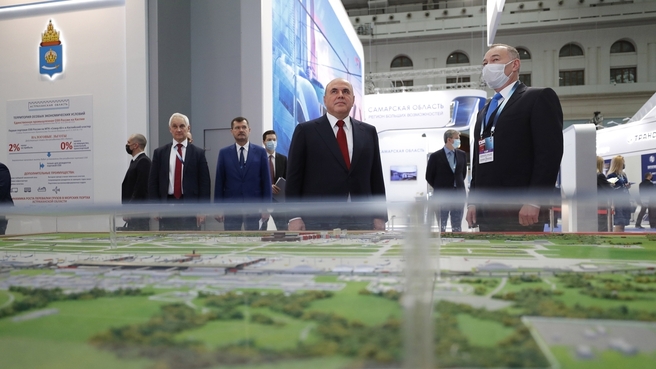 Viewing the Transport of Russia exhibition. With Alexander Ponomarenko, Chairman, Board of Directors, Sheremetyevo International Airport

The Transport of Russia exhibition is part of Transport Week, an annual business event that includes a series of nationwide and international events for an open discussion of the most topical transport matters and promotion of mutual understanding between representatives of government agencies and the business community. 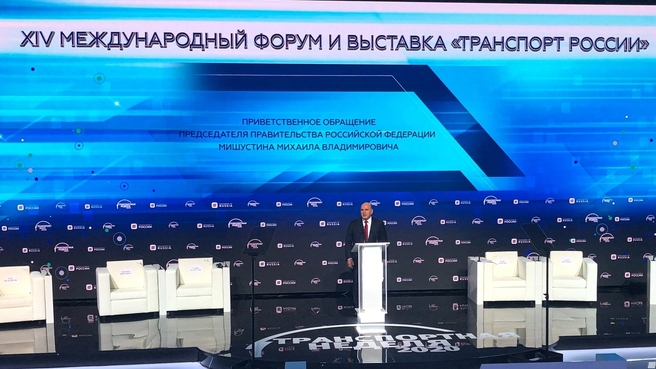 I am delighted to welcome all of you and everybody taking part in this plenary session today.

At an annual forum people get a good opportunity to discuss with one another in a professional way the future of the transport industry. This is something that is of particular importance for our economy.

In today’s COVID-19 environment, it is extremely important that transport operates reliably at every single point in this country, so that people can be supplied with medicine, PPE and food uninterrupted and on time.  This is why it’s necessary to keep a very close eye on this sphere.

Our president has described the development of the transport industry as a strategic priority. It is its potential that is primarily in demand, when we are speaking about the growth of the national economy. This is vital for achieving the national development goals and implementing all the main national projects and federal and regional programmes aimed at making people’s lives better and more comfortable. And, of course, it is impossible to speak about the development of international integration in isolation from creating a common transport network, thoroughfares and corridors or launching modern digital logistic systems.  All of this is providing our country, famous for its huge distances, with competitive advantages and strengthening its position on the world markets.

It is crucial to focus on digitalising the transport industry. The digitalisation is spreading to all its sections and makes it possible to ensure that logistic chains function seamlessly and, of course, cut down on travel time.

The development of all types of transport is stipulated within the framework of large-scale projects that have been successfully implemented in recent years. The major one the Safe and High-Quality Roads national project. It involves 83 constituent entities and 105 cities.

We will continue to provide financial support to the regions. The budget for the period 2022 and 2023 provides for an increase in funding for the transport industry.

Thanks to the national project new roads are being built, as well as new high- quality roads between local communities within the regions, plus bridges and junctions are being constructed and repaired, a modern road infrastructure which is necessary for the safe and comfortable movement of traffic is being created, the road network in large cities is being upgraded and there are fewer traffic jams and less congestion on the roads and streets. This helps when it comes to reducing the number of accidents, and also reduces travel time and improves the urban environment, making it more user-friendly for people. We will continue our work in this area.

Among the most ambitious projects accomplished recently is the Crimean Bridge which connects the Peninsula with the Krasnodar Territory, one of our most important steps in the economic development of not only Crimea, but Russia as a whole. The world’s largest non-nuclear icebreaker Viktor Chernomyrdin and the lead universal nuclear icebreaker Arktika have been built. Thanks to the M11 Neva federal motorway it is now possible to drive from Moscow to St Petersburg in just six hours. The Tavrida road, which connects Kerch and Sevastopol has been officially opened, too, and as a result it is only a three hour drive between these two places.

Construction of the Central Ring Road in the Moscow Region continues, and recently was opened for traffic on its longest segment that stretches more than 105 km. In the near future, another one-hundred-km segment will be opened. In total, more than 500 km of federal roads will be built and upgraded by the end of the year, more than 200 of them, on the terms of public-private partnership.

Today, we saw at the exhibition some other large-scale transport projects.

Regrettably, far from all the regions are able to cope with the maintenance and modernisation of road infrastructure on their own.  The government is promptly responding to requests for relevant help from the Russian regions. As many as 1,700 kilometres of regional roads built with government assistance will soon be commissioned and another 16,000 repaired.

However, I must just mention aside from this the responsibility of the regional authorities and the relevant agencies for organising the transport industry’s operations.  It is necessary to use effectively and to upgrade the infrastructure in areas of their responsibility to obviate any failures, let alone accidents on old or morally obsolete facilities.

This year has been anything but simple. Transport is one of the industries that were hit the hardest by the spread of COVID-19 and related restrictions introduced in this connection. Several negative factors at once have been at play, including the closure of borders, a plunge in domestic demand for transport services, and a decline in activities of companies that supply raw materials and equipment. But despite this, transport continues operating safely and smoothly, meeting the requirements for transportation services and, most importantly, their safety.

A system for the effective use and development of international transport corridors is being created to increase revenues from exports and transit of cargoes via this country’s territory. We have seen the most important of these today, which are Europe-Western China, North-South, the Northern Sea Route, the Trans-Siberian Railway, and the Baikal-Amur Mainline. Some of their sections are already operating and this is just a portion of the projects that will be implemented shortly.

All these achievements would have been impossible without the coordinated, responsible and effective work being done by all sections of the transport complex that currently employs over 4.5 million workers, who are true enthusiasts devoted to their cause.

I would like to sincerely thank all those who are carrying on and keeping the Russian transport traditions and are passing them on to the new generations. The industry owes them its successes. I wish you all good health and prosperity.

On the occasion of Transport Worker’s day, I would like to send greetings to every one of you.